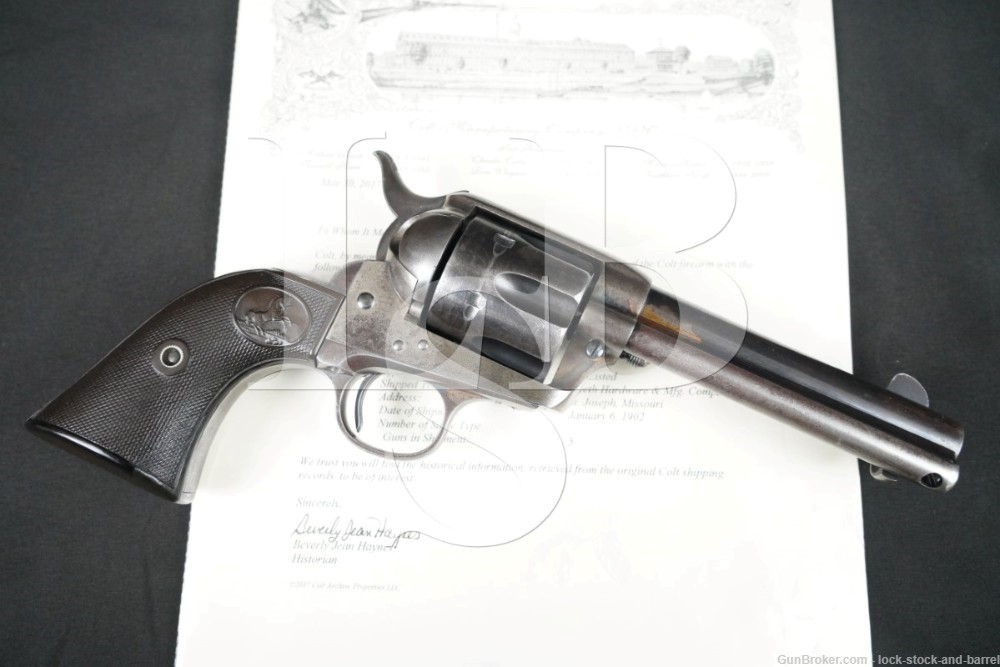 Stock Configuration & Condition: The grips are two-piece checkered black hard rubber with rampant colt in oval at the top of each panel. The grips have light handling wear with some scattered minor nicks and scratches. There are a few areas of minor discoloration, going to a brownish color. The checkering is generally well defined and there is generally good detail on the rampant colts, better in the left panel than the right. The right panel has a repaired crack across the indexing pin hole on the interior (the frame’s indexing pin is missing or has been filed flush), visible on the bottom face and a little bit into the bottom of the checkering. Given the lack of a serial number scribed on the interior of the grips, it is not clear if the grips are original to the gun. Overall, the grips are in Good-plus condition as repaired.

Bore Condition: The bore is semi-bright. The rifling is sharp. There is infrequent minor erosion in the bore with a patch of light pitting in the top of the bore.

Overall Condition: This revolver retains about 50% of its metal finish. The finish is thinning at all edges. The barrel has finish wear along the left and bottom with generally strong finish along the top and right. There is a void in the finish on the right-rear of the barrel, matched on the top-rear of the ejector housing which looks like oxidation which was scrubbed out. The housing has strong finish along the top forward of this and along the bottom, but has finish wear along the side. The frame’s case color has mostly muted, but there is good color on each side in front of the cylinder, in the hammer slot, in the loading slot and on the front face around the cylinder pin. The cylinder has scattered finish wear, with some also appearing to be from oxidation which was scrubbed out in the past. The grip frame has handling wear in the grip areas. The worn areas show discoloration from oxidation. There are some scattered light nicks, scuffs and scratches. The action shows operational wear including a turn-line on the cylinder The markings range from clear to worn, but legible. The screw heads range from sharp to tool marked with strong slots. Overall, this revolver is in about Good-plus condition.

Box, Paperwork & Accessories: This revolver comes with a Colt Historian letter which lists this revolver as being shipped January 6, 1902 to the Wyeth Hardware & Mfg. Co. in St. Joseph, Missouri. It shipped as one of five revolvers of the same type in the shipment. The letter is in Excellent condition.

Our Assessment: Colt’s Single Action Army is, perhaps more than any other, an iconic American pistol. It was the U.S. issue sidearm for the last two decades of the 19th century, used by pioneers, outlaws and lawmen across the expanding nation, and captivated audiences on the silver screen and television. Produced for nearly a century and a half, they are still being made, today! This example is a 1st Generation Single Action Army made in 1902. It is in about Good-plus condition, retaining about 50% of its original finish with a strong bore and mechanics. The revolver originally shipped to St. Joseph, Missouri, a historical location both as the starting point of the Pony Express route, but also as the city in which Jesse James lived, and was killed. Any 1st Generation SAA would make a great addition to a Colt collection, and this early 20th Century example should be no exception. Please see our photos and good luck!