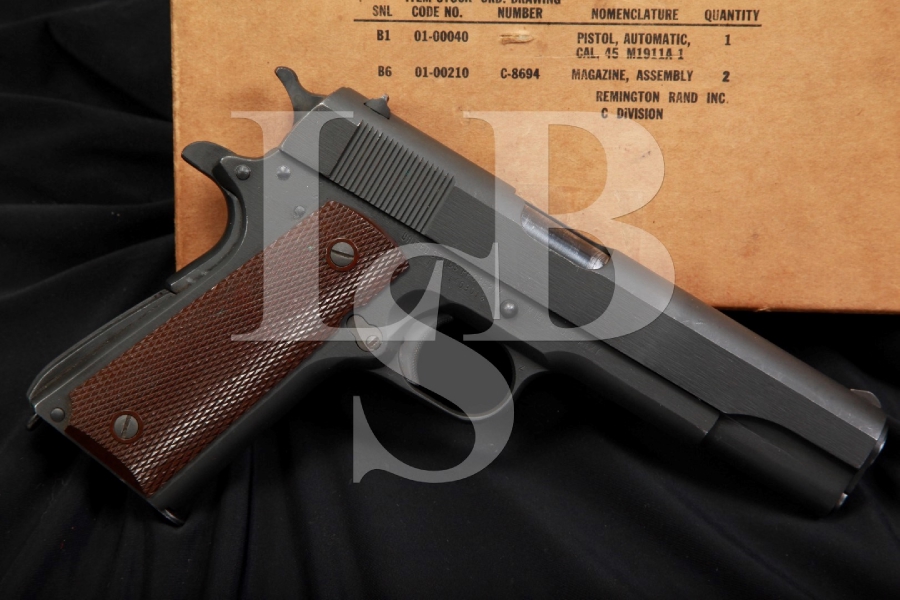 Stock Configuration & Condition: The grips are checkered brown plastic. The checkering is sharp but the left grip has two mars above the lower grip screw. The grips rate in about Fine plus overall condition.

Type of Finish: The pistol has a black Parkerized finish and the barrel is blued. The mainspring housing is serrated.

Overall Condition: This pistol retains about 96% of its current metal finish. The front and rear edges of the slide and frame, the top right edge of the slide, and the bottom of the mainspring housing show thinning. The slide and frame each show a very few light handling marks. There is also a mark through the finish underneath the slide release, a small mark through the finish on the left side of the slide above the slide release and marks through the finish on the sides of the grip safety. The slide serrations are sharp and magazine release checkering is sharp. The mainspring housing serrations show light wear, as do the hammer and recoil spring plug checkering. Two of the grip screws are sharp and the other two are slightly disfigured. The markings are clear except for the ordnance cartouche on the right side of the frame, which is lightly stamped. Overall, this pistol rates in about Excellent condition.

Mechanics: The trigger pull is crisp. The slide is tight on the frame. This pistol has manual and grip safeties. The action functions correctly. We have not fired this pistol.

Box, Paperwork & Accessories: This pistol comes with one 7-round magazine with a black Parkerized finish. The magazine shows minor wear with thinning on the edges of the baseplate. The magazine is in about Fine condition. Also included with the pistol is an original brown cardboard arsenal shipping box. The box is marked on the top with “REMINGTON RAND INC. / C DIVISION” and indicates it originally held one item “01-00040 PISTOL, AUTOMATIC” and two items “01-00210 MAGAZINE ASSEMBLY”. The top of the box shows light staining from handling and a two spots where it looks like tape was applied and then removed. There is also a perforation and a very shallow slide in the top surface from a knife. The edges are intact and free of surface loss. The bottom half of the box has remnants of paper tape on its bottom surface. The inside shows very shall compression marks from the pistol. Overall, this box is in Fine to Excellent condition.

Our Assessment: > The 1911 and 1911-A1 pistols served the military of the United States from 1911 to 1985, through both World Wars, the Korean and Vietnam wars. They gained a reputation as a reliable handgun with plenty of stopping power, and are held in high regard by those who have used them. This is a WWII manufactured 1911-A1 pistol made by Remington Rand. It is correctly marked for a Remington produced pistol, and has a Colt barrel (Colt barrels were supplied to Remington through the middle part of 1943). In his book “Colt .45 Service Pistols”, Clawson indicates that by the end of the war, Remington Rand produced the lowest cost pistol and that “during 1944 and 1945 they produced a superior weapon, equal to or better than those produced by other companies”. This says a lot for Remington Rand, despite having a few problems in the early part of 1943 as they tried to ramp up production. The pistol is in about Excellent condition with 96% of its original finish remaining. The pistol shows thinning on its edges and a few marks through the finish, mainly on the sides of grip safety and on the frame under the slide release. The slide is tight to the frame and the bore is bright with sharp rifling. In addition to its great condition, it also comes with a Remington Rand shipping box showing their item stock codes for the pistol and magazine. This should garner a great deal of interest from the collectors of wartime 1911A1 pistols. We have seen quite a few Ithaca and Remington produced pistols, but this is the first time we have seen one with an arsenal issued box.