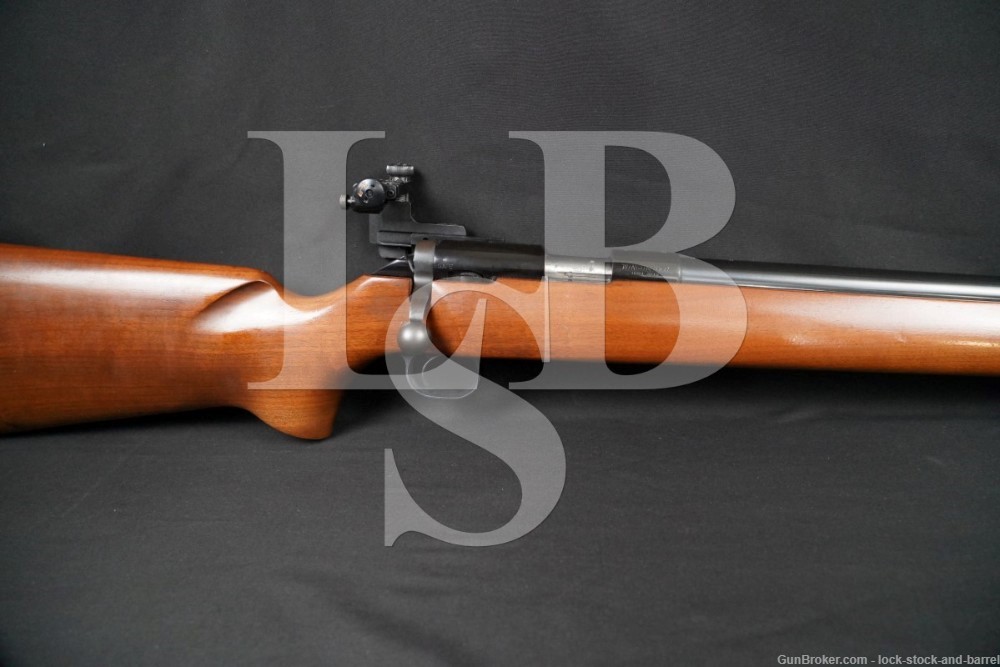 Sights/Optics: The front male dovetail notch is fitted with a Redfield International Match sight installed. The front sight accepts interchangeable inserts with only the installed transparent aperture with scribed crosshair insert included. The rear-left of the receiver has Redfield Palma peep sight installed, adjustable for windage and elevation.

Stock Configuration and Condition: The stock is a one-piece smooth walnut with beavertail forend which has a forend rail, pistol grip, fluted straight comb, and a black rubber checkered buttpad. There is a sling swivel installed at the front of the underside forend rail. The stock has some scattered light compressions and nicks in addition to one more notable ding on the upper right edge of the forend. There are no chips or cracks. The LOP measures 14” from the front of the trigger to the back of the buttplate. The pad is lighter in appearance, likely due to age. Overall, the stock is in Fine-plus condition.

Overall Condition: This rifle retains about 98% of its metal finish. The top of the barrel is peppered with very faint surface oxidation. The screw heads range from sharp to tool marked with strong slots. The markings are clear. Overall, this rifle is in Fine–to-Excellent condition.

Our Assessment: The Winchester Model 52 is a bolt-action .22-caliber target rifle introduced by the Winchester Repeating Arms Company in the year of our lord 1920. For many years, it was the premier small-bore match rifle in the United States, if not the world. Known as the “King of the .22’s,” the Model 52 has been called by Winchester historian Herbert Houze “[A] perfection in design”. The Model 52 was ultimately discontinued in the 1980s because its manufacture was too costly, and its popularity had waned in the face of expensive European rifles. The Model 52 underwent several changes over its life, and although different model names were not advertised, and the barrel markings remained the same, letter prefixes and suffixes were added to the serial number to designate any significant design changes. This is a model 52 “E” which has been set up for bench-rest shooting with a fine pair of Redfield Olympic target sights. Made in the period between 1972 and 1975, this Model 52 would have been among the last several hundred made. Winchester would adjust their catalog offerings based on what parts they had left and as such were able to produce a modest amount of 52’s annually (as few as 75 in certain years of the 1970s). The rifle is in about Fine–to-Excellent condition with a bright bore and strong mechanics. There is a bit of very minor surface oxidation that may come away with some dedicated but gentle cleaning. This rifle will make a wonderful benchrest rifle for the lucky winner. Good luck and happy bidding!