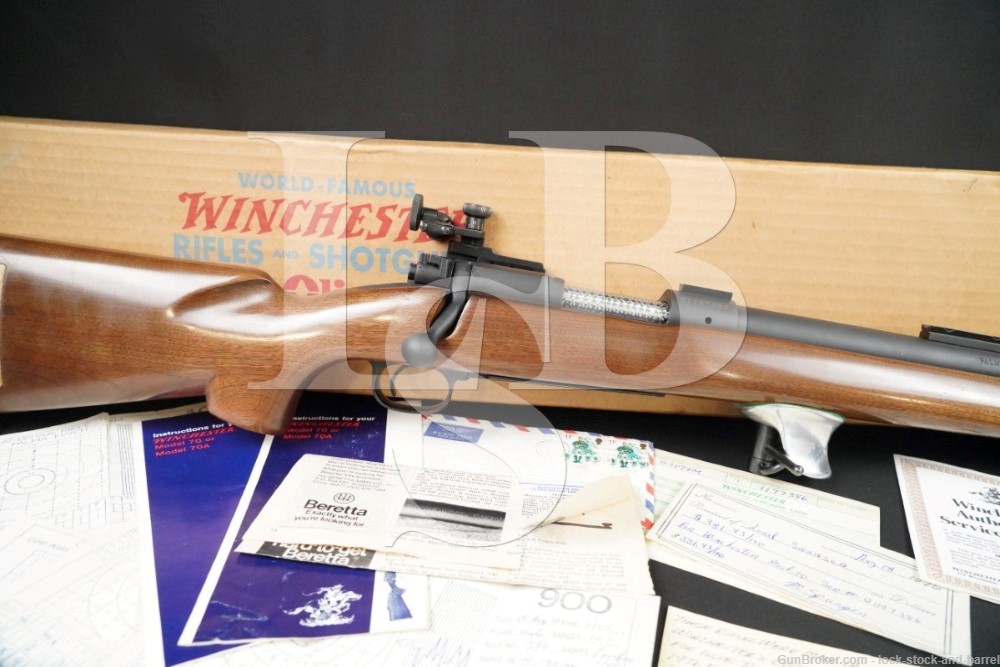 Barrel Length: 26″, Extra Heavy Profile with Counter-Bored Muzzle. Approximately 1.14″ at the front edge of the receiver tapering to 0.89″ at the muzzle.

Sights / Optics: The front sight is a Redfield International Match globe-style sight mounted to a stepped sight block at the muzzle. The sight accepts interchangeable inserts, only the installed aperture insert is included. There is a longer sight block screwed to the barrel toward the rear and another short sight block screwed to the chamber ring. The bridge has a pair of drilled, tapped and filled holes. The left of the receiver has a Redfield WB-490 mount with a Redfield International Match aperture sight installed, adjustable for windage and elevation.

Stock Configuration & Condition: The stock is a Marksman-style one-piece smooth walnut with beavertail forend, pistol grip, straight comb, serrated black rubber Winchester buttpad, a sling swivel mounted under the butt and an inlet 10″ accessory rail in the forend with a sling swivel and hand-stop installed. The receiver and chamber section of the barrel are glass-bedded with the barrel free-floating forward of the chamber. The sides of the forearm show several small compression marks. The top left of the butt shows a verical scratch. The stock shows other scattered minor nicks and handling marks. There is a sticker on the right of the butt from the 1976 Palma Match. There are no chips or cracks. The LOP measures 13 inches from the front of the trigger to the back of the buttpad. The pad shows infrequent minor wear. The pad spacer shows light discoloration. Overall, the stock is in Very Good Plus to Fine condition.

Bore Condition: The bore is bright with sharp rifling. There is no erosion in the bore. Our gauge shows an ME of about 0.5.

Overall Condition: This rifle retains about 98% of its metal finish. The action shows minor operational wear. The metal shows scuffs, light scrapes and a few light scratches. The screw heads show light use. The markings are clear. Overall, this rifle is in Fine condition.

Box, Paperwork & Accessories: The rifle comes in its original cardboard Winchester box with hand-written serial-matching label. The smaller interior box is marked “WINCHESTER” and with Winchester logo. It shows creasing and a tear. The exterior box is marked with a Winchester sticker that shows the rifle’s information.
The rifle comes with Winchester Model 70 instruction pamphlet, an article on the 1976 Palma Match Rifle (torn out of an unknow magazine), British Palma Match score sheets and hand written receipts documenting the initial purchase and subsequent sale of the rifle. These items show creasing and discoloration. They are in about Very Good condition.

The Palma Trophy Match Model 70 was never cataloged and never offered for sale to the public. These rifles were only provided to the teams at the U.S. hosted Palma matches. This rifle was purchased from the team by Lord Swansea who shot for Great Britain’s team during the 1976 Palma Match. Lord Swansea sold the rifle the very same day for a profit. Both the handwritten purchase receipt and sales receipt are marked with the rifle‘s serial number. The purchase receipt is written on the back of a British Rifle Team score sheet. The rifle was sold to a Edward Heers who was a Hornady Mfg. Co. employee. An envelope addressed from Lord Swansea to Mr. Heers is also included.
Please see photos.

Our Assessment: The Palma Trophy Match is one of, if not the most prestigious long-range rifle competitions in the world. Its history goes back to 1873, when the first International Long Range Rifle match was hosted by the Creedmoor Range in Queens, New York. Teams from Ireland the United States participated in this first match with a second match held in 1874 at the Dollymount Range in Ireland, with the United States winning both matches. The National Rifle Association of America organized the first Palma Trophy Match in 1876 to celebrate the American Centennial, commissioning a massive seven and a half foot trophy from Tiffany’s for $1,500 (nearly $40,000 in 2022!). The name was taken from the trophy, a replica of a Roman standard which had “PALMA” replacing “SPQR” across the top of the standard, Latin for “victory/valor”.

These rifles were not standard Winchester Target models, but rather rifles specially built by Winchester’s Custom Shop. The Palma Trophy Match Model 70 was never cataloged and never offered for sale to the public, only provided to the teams at the U.S. hosted Palma matches. The barrels used for the 1976 rifles were longer, heavier profiled and had counter-bored muzzles. Their actions and the chamber area of the barrels were glass-bedded to the stocks with the remainder of the barrels free-floating. Intriguingly, their receiver’s are slotted for clip-loading and the bolts were factory-jeweled. The 1976 model differed from the 1971 by going back to the Redfield International Match front sight which was mounted on an elongated two-step base intended for smallbore shooting. It also received a new Palma Match roll-mark on the right of the barrel celebrating the Centennial of the Palma Trophy Match, coinciding with America’s Bicentennial.

This example of the 1976 Palma Trophy Match rifle is outstanding. It should be noted that the United States hosted at Camp Perry in 1976 and also won (as the American team would in each of the three years that the Winchester 70 was selected as the match rifle). This rifle was used by a Lord Swansea who shot for Great Britain’s team which placed Third out of the six teams, just 32 points behind South Africa. The rifle has all of the correct features and markings of the 1976 Match rifles and still has a sticker on the stock from its use in the Match. This will make a truly exceptional addition to a Winchester collection or a collection of long range competition rifles and, with approximately 140 rifles made for the 1976 Match and knowing which team the rifle was assigned to, an opportunity such as this doesn’t come by every day. Please see our photos and good luck!