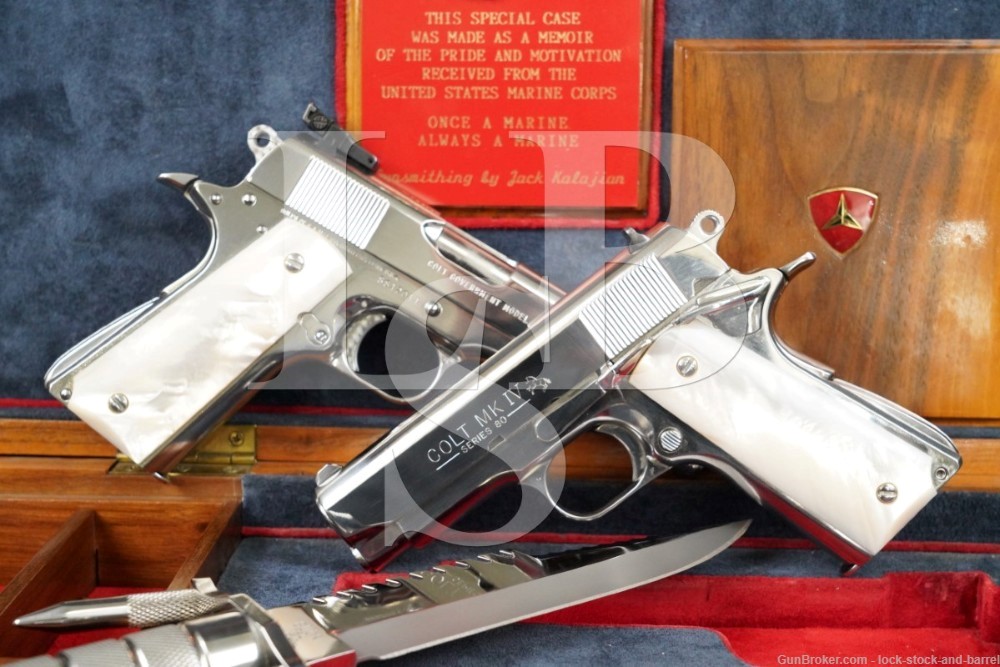 Year of Manufacture: Both pistols were made in 1985 (https://www.colt.com/serial-lookup)

220131HE013: The sights have been replaced with a Millett target sight set. The front sight is a ramped blade with a “T”-shaped orange insert. The slide has been modified for the Millett-style two-position mounting of the front sight. The rear sight is a white-outlined square notch adjustable for windage and elevation dovetailed to the rear of the slide.

220131HE013: The right panel has a crack across the interior surface which can be seen on the front and rear edges, but does not go all the way through the panel. There are a few nicks and small chips on the left panel including around the grip screws. Overall, the grips are in Good-plus condition as not original to the gun.

220131HE014: The right panel has a crack across the interior surface which can be seen on the front and rear edges, but does not go all the way through the panel. Otherwise, there are only light handling marks. Overall, the grips are in about Very Good condition as not original to the gun.

Type of Finish: Bright Polished Stainless Steel. The Government Model’s hammer and trigger have been jeweled.

Finish Originality: Refinished, some parts have been replaced (see Our Assessment)

Bore Condition: The bores are both bright and the rifling is sharp. There is no erosion in either bore.

220131HE013: This pistol retains about 97% of its metal finish. There are a few scattered minor marks and light operational wear. The most notable defect is an “idiot mark” under the slide stop on the left of the frame. The edges of the screw heads have softened due to polishing, but the slots are strong. The markings are generally clear, the trigger guard markings have soft edges. Overall, this pistol is in about Fine condition as customized.

Mechanics: The actions function correctly. The slide to frame fit has light play on each pistol. The triggers are light and crisp. We did not fire these handguns. As with all used firearms, it may need a thorough cleaning to meet your maintenance standards.

Box, Paperwork & Accessories: These pistols come in a custom wood display case. The case has a french-fit interior with compartments for the pistols, the included Buck 184 knife and a lidded accessory case. The lid has the 3rd Marine Division insignia. The inside of the lid has a plate marked “SEMPER FIDELIS” over an eagle, globe and anchor with “THIS SPECIAL CASE / WAS MADE AS A MEMOIR / OF THE PRIDE AND MOTIVATION / RECEIVED FROM THE / UNITED STATES MARINE CORPS / ONCE A MARINE / ALWAYS A MARINE / Gunsmithing by Jack Kalajian”. There are also eagle, globe and anchor pins by each pistol’s compartment. Each pistol comes with a single 7-round magazine, one of which has Colt markings, the other has no markings. The magazines have light operational wear, intact feed lips and a strong spring. The Buck 184 knife has been polished bright to match the pistols and shows minimal handling wear. The case has light storage wear.

Our Assessment: This is quite the set! Customized by noted Southern California gunsmith Jack Kalajian, this is a matched set with a Colt Government Model and a Commanding Officers Model. The Commanding Officers Model is an interesting pistol in and of itself, produced with an Officer’s Model sized slide on a Commander sized frame. Both pistols have been equipped with extended slide stops, thumb-safeties and beavertail grip safeties as well as a bright-polished finish on their stainless steel, set off by pearl grips. The Government Model has been further set up with adjustable Millett target sights and a 6″ ported barrel. The whole set comes in a handsome custom-fit display case which is also fit for an included Buck 184 knife. It would certainly appear that the set was originally made for one of Uncle Sam’s Misguided Children, as the case is adorned with three eagle, globe and anchors as well as being dedicated to the pride and motivation of the USMC. Whether you’re a Devil Dog yourself or are looking for a gift for the Jarhead in your life, this is a beautiful set that will add to any collection. Please see our photos and good luck!