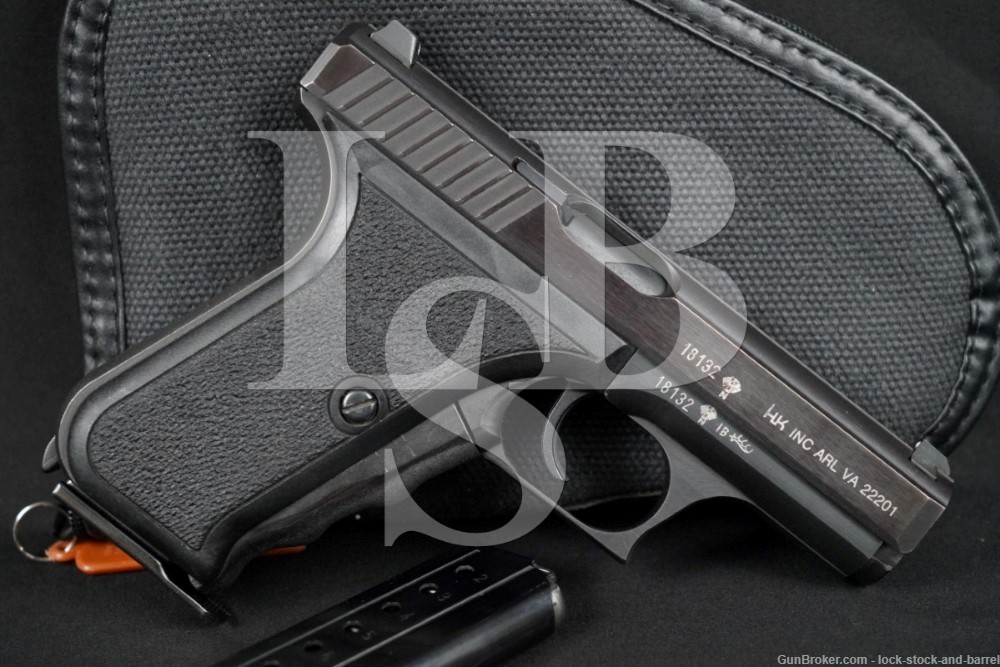 Stock Configuration & Condition: The grips are two-piece textured black synthetic panels, the left panel is marked “HK P7” at the bottom. The grips have no notable wear or damage, only light handling marks. There are no chips or cracks. Overall, the grips are in Excellent condition.

Overall Condition: This handgun retains about 97% of its metal finish. The edges have thinned. There are some light handling marks. There are a few areas of minor thinning, mostly on the frame. The screw heads are sharp. The markings are clear. Overall, this pistol is in about Excellent condition.

Mechanics: The action functions correctly. This pistol features a gas-delayed delayed blow back system. The pistol’s action is cocked by squeezing the fore strap of the grip frame, delivering a smooth, short trigger pull. The pistol has a heel magazine release. The slide to frame fit is tight. We did not fire this handgun. As with all used firearms, a thorough cleaning may be necessary to meet your maintenance standards.

Box, Paperwork & Accessories: Included are two 8-round magazines and a soft case.

Our Assessment: The decision to equip West German police with an advanced 9mm service pistol and replace existing 7.65mm Browning-caliber weapons was prompted after the 1972 Munich Olympics Massacre. The new firearm was to meet the following requirements: chamber the 9×19mm Parabellum cartridge, weigh no more than 1,000 g (35 oz), the pistol’s dimensions would not exceed 180 × 130 × 34 mm, it should have a muzzle energy of no less than 500 J and a service life of at least 10,000-rounds. The pistol was also to be fully ambidextrous, safe to carry with a loaded chamber and able to be quickly drawn and ready to fire instantly. As a result of a competitive bid the German police forces selected three different pistols into service: the Swiss SIG Sauer P225 (designated the P6) and two German designs—the P7 (officially designated the PSP) and the Walther P5. Series production of the P7 started in 1979. Shortly after, the pistol was adopted by the German Federal Police’s counter-terrorism unit (GSG 9) and the German Army’s special forces formations. The pistol was also exported to several countries. This pistol was made in 1981. The polygonal rifling is still well defined with no erosion and the pistol has a superb trigger pull that is initiated by squeezing the fore grip of the grip frame. It has very minor finish wear, coming equipped with two magazines. Whether you’re looking to collect or to carry, this is a nice HK to add to any collection. Please see our pictures and good luck!