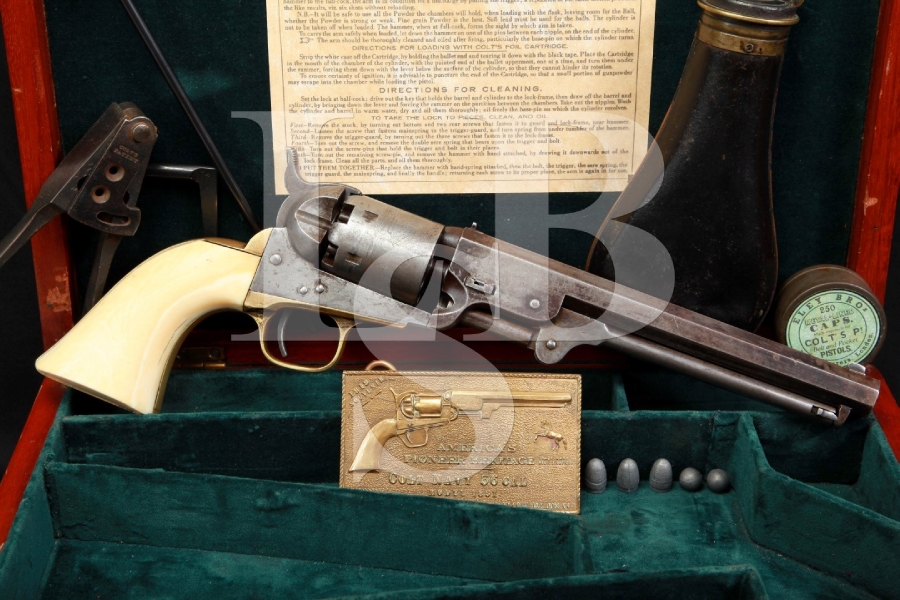 Stock Configuration & Condition: The grip is one piece real antique bone. The fit along the front edge and butt is not flush and the fit to the butt and back strap is slightly shy of the frame. A repair can be seen on the left panel and natural cracks in the material are visible on both panels. There are neither major compression nor handling marks, suggesting that the grip is made of lower grade material than usually seen from Colt. It appears that the grips are aftermarket additions but likely have been on the gun for a long time. The grips rate in about Very Good overall condition.

Finish Originality: The finish is all original, however there is little original finish remaining.

Bore Condition: The bore is gray and the rifling is sharp There is erosion throughout the bore.

Overall Condition: This handgun retains about 30% of its metal finish. Remnants of bluing can be seen on the barrel and cylinder, especially on protected surfaces and traces of silver plating remain on the back strap and trigger guard, with identifiable patches present inside the grip. Small compression marks are visible with deeper marks at the wedge slot. The edges of the barrel are sharp. The screw heads are moderately deformed but serviceable. The markings are clear. Overall, this handgun rates in about Very Good Plus condition as an antique.

Mechanics: The locking bolt does not lower in the half cock position, but otherwise the action functions properly. The cylinder lock up has only a little play. We did not fire this handgun.

Box, Paperwork & Accessories: The pistol comes in a wooden case which is vintage but not original to the pistol, probably made in the early 1900s. Research reveals the existence of similar cases with the same instructions affixed to the lining of lid, but with slightly different compartment configurations. The exterior of the lid sports a small brass plaque which is blank. Shallow marks are visible in the plaque and similar marks are present in the wooden lid with clusters of deeper marks at the left rear corner. The right edge piece is pulling away from the lid and the left edge has been refastened with a finishing nail. The miter joints are held together with staples visible when the case is open. The keyhole on the front edge exhibits wear and spots of tarnish. The included key fits but does not operate the lock. The interior of the case is lined with green velvet and is in Good condition. The compartments in the floor are fit to the pistol, accessories and tools and there are loading and cleaning instructions affixed to the velvet lid lining. Included is a steel and brass powder flask which has been refinished and shows dents as well as marks in the surface. The flask appears to be period correct, but the spout is wide, indicating that it was not designed to be a companion to a .36 caliber pistol. The flask is in Fair condition. A ball and Minnie ball mold is present which is made of steel and marked “COLT’S PATENT” on the sprue cutter. The mold is period correct for the pistol, appears to have been refinished, showing erosion under the finish. The retaining screw for the sprue cutter has been broken off. The mold is in Fair condition. A screwdriver/nipple wrench tool is also found in the case, which is typical for the era; it is blued, stamped with “3” and is in Fine condition. The screwdriver does not fit the screws in the revolver, indicating that the tool is not original to the pistol. A steel cylindrical cap box and lid are included in the package, which sports a round green label with black lettering which reads “ELEY BROs”, “Manufacturers, London.”, “250 / METAL-LINED / CAPS / Made expressly for / COLT’S Pt / Belt and Pocket PISTOLS”. The cap box appears to be period correct, exhibits handling marks and spots of surface erosion and is in Good overall condition. Seven .373” round balls and eight .373” conical projectiles are included, likely cast from the bullet mold, all in Excellent condition. The projectiles are not covered in oxidation, indicating they were cast in more recent times. A cleaning rod with a patch jag is present, which does not appear period correct for the pistol. The most interesting item contained in the case is a brass belt buckle with an image of a Colt Navy and a Rampant Colt logo. The face of the buckle reads “1919 SOUVENIER”, AMERICA’S / PIONEER HERITAGE / COLT NAVY 36 CAL / MODEL 1851 / MADE FROM SHELL CASE BRASS FROM 1916-18 WAR BY COLT FIREARMS CO”. The rear face is stamped with an American Eagle holding a banner in its beak which reads “A GIFT FROM COLT” and a logo which reads “BAY STATE JEWELRY and SILVERSMITHS CO.”, “MADE IN ENGLAND”, a patent number and “SERIAL No 22010”. The buckle shows spots of oxidation and is in Fine condition.

Our Assessment: This 1863 manufactured Colt Navy is in Very Good condition, retaining about 30% of its original metal finish and displaying few remarkable handing marks. The Naval battle scene is shallow but visible and the serial numbers of all the parts match. The pistol shows little erosion and is equipped with antique but not factory original antique bone grips. The revolver comes in a nice case which is reminiscent those from the Colt Factory, but is of more recent vintage. Accessories are included which are likely not original to the pistol, but are largely consistent to the period. This is a collector’s display of a Colt C1851 Navy revolver, which looks great and deserves to be front and center in any collection.