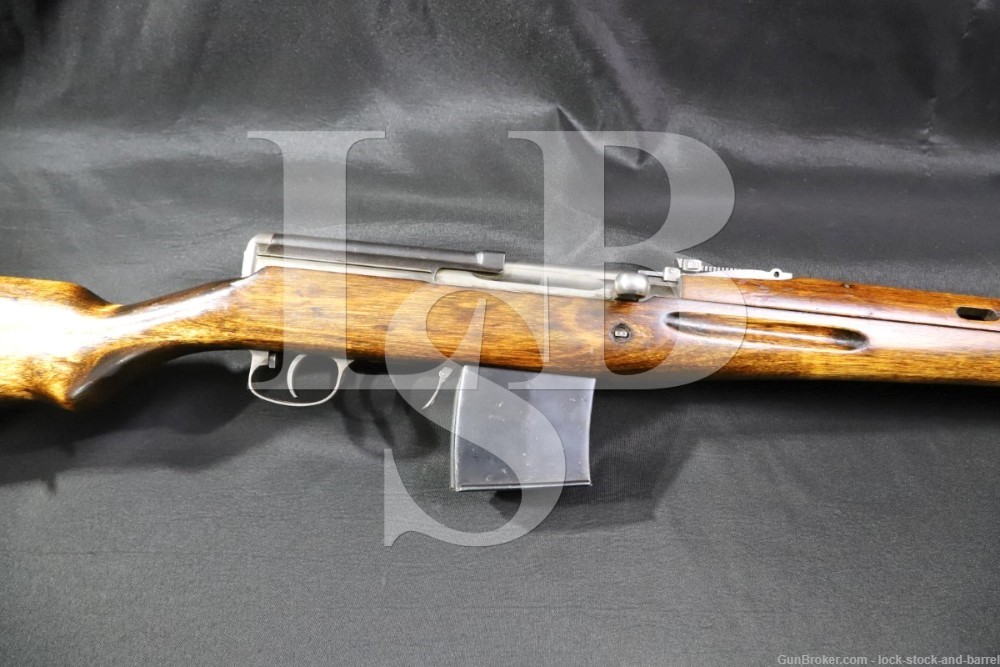 Stock Configuration & Condition/ Grip: The stocks are 4-pieces featuring ventilated metal upper and lower piston covers, a wood ventilated handguard, a wood forend and butt, a barrel band with a sling swivel on the left side, finger grooves on the forend, a semi-pistol grip, slightly curved comb, sling swivel on the belly and metal buttplate. The stocks have some light handling marks, nicks and scuffs. Notably, there are some scattered light nicks on the left side of the grip. There are no chips or cracks. The LOP is 13.25” from the trigger to the rear end of the buttplate. The buttplate has lost most of its finish and has some light surface oxidation. Overall, the arsenal refurbished stocks are in Fine condition.

Bore Condition: The bore is dark with mostly sharp rifling. There is erosion scattered throughout the bore.

Overall Condition: The rifle retains about 75% of its metal finish. There are some light-moderate handling marks, nicks and scuffs. Notably, there is finish loss on the top piston cover and the receiver. Also, there is pitting visible under the bluing on the right side of the barrel, just ahead of the pistol covers, and some finish loss around the muzzle. Some proof marks have faded but the majority of the markings are clear. The screwheads are serviceable. Overall, this arsenal refurbished rifle is in Very Good condition.

Box Paperwork and Accessories: The rifle comes with a detachable box magazine that is not serial matched (the markings are described above). The magazine has some light handling marks but it remains in Very Good condition.

Our Assessment: This Tula Arsenal manufactured SVT-40 is a semi-automatic rifle that is fed by a detachable magazine which takes 7.62x54mmR rounds.

The “SAMOZARYaDNAYa VINTOVKA TOKARYeVA OBRAZTsA 1940 GODA” (self-loading rifle Tokarev model 1940) or SVT-40 was designed by Fyodor Vasilievich Tokarev, one of the preeminent Soviet weapon designers of his time. The precursor to the SVT-40 was his SVT-38 which proved unpopular among Soviet soldiers when it was introduced during the Winter War of 1940. The SVT-38 suffered from a number of mechanical issues: the detachable magazines were prone to falling out, the rifle was easily jammed by pollutants and it was sensitive to extreme temperature. The SVT-38 was pulled from service after the Winter War and reworked. The reworked rifle was designated the SVT-40, it addressed a number of its predecessor’s reliability issues and its weight was reduced by 600 grams. The SVT-40 would see extensive use by the Red Army during WWII.

This SVT-40 was captured by the Finnish during WWII. The Finnish military made extensive use of captured Soviet weaponry, and during the opening months of Operation Barbarossa (the German led invasion of the Soviet Union; remembered as the Continuation War in Finland) vast quantities of Soviet equipment fell into the hands of the Finnish military. The Finns pressed these captured weapons into service, with Finnish forces relying on the captured Soviet weaponry. Th Finnish did not domestically manufacture the SVT-40 or its parts, rather they would use salvaged parts from damaged rifles captured on the battlefield and spare parts sold to the them by Germany (which also captured large numbers of Soviet military equipment), hence the lack of serialized parts on most Finnish SVT-40s. By 1944 it was clear that Germany was going to lose the war, thus Finland penned a separate peace with Moscow. Although the arrangement forced Finland to make a number of concessions to Moscow, the country managed to retain its sovereignty. This rifle is an interesting WWII-era semi-automatic rifle that was used by both the Red Army and Finns. Good luck on your bid!