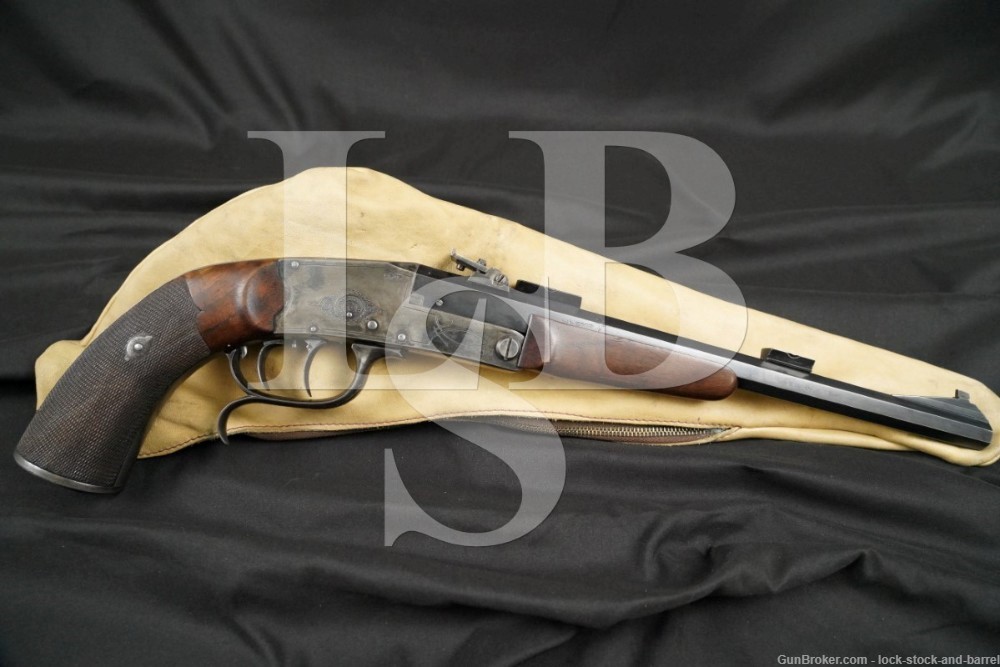 Markings: The left side of the chamber is marked with a faded proof with “NGP M/71 / 1,8 gr Bl.” which was in use from 1893 until approximately 1914. The frame, back-strap, screw-heads and trigger-guard/lever all have decorative markings. The bottom of the barrel, concealed by the forend, is marked “4”, “8”, a crowned “B” which indicates the gun was proof tested after being fully assembled, a crowned “G” which indicates a rifled barrel, a crowned “U” which was the definitive proof (used until 1939) and features the serial number “527”. The right side of the barrel has the same crowned proof marks in addition to “5,4 mm”. The right side of the receiver has the crowned “B” and “U”  proof marks.

Sights/ Optics: The front sight is a ramped blade integral to the barrel. The rear sight is an adjustable square-notch leaf screw-set to a base dovetailed to the chamber. The top of the barrel has been drilled and tapped with two accessory rails mounted between the front and rear sights (please note, no accessories are included or installed).

Stock Configuration & Condition/ Grip: The stocks are three piece wood featuring a screwed-on forend and two piece checkered grip panels. The stocks have some light handling marks, nicks and scuffs. The checkering remains sharp. There are no chips or cracks. Overall, the grips are in Very Good condition.

Finish Originality: The barrel has been refinished.

Overall Condition: The pistol retains about 70% of its metal finish. There is finish loss along the leading edges, most of the case coloring has worn off and there is finish loss around the muzzle. Additionally, there are also some light handling marks, nicks and scuffs. The marking on the left side of the chamber has faded but the rest remain clear. The screwheads have light tool-marks but they remain serviceable. Overall, ths pistol is in Very Good condition.

Mechanics: The action functions correctly. The barrel locks with no play on the receiver. We have not fired this pistol. As with all used firearms, a thorough cleaning may be necessary to meet your maintenance requirements.

Box Paperwork and Accessories: There is a soft case included with the pistol. The case has some light handling marks but remains in Very Good condition.

Our Assessment: This is a German Freie Pistole which is a single-shot lever-actuated top-break target pistol chambered for .22 Long Rifle rounds. The Frei Pistole was a handgun made specifically for competitive shooting at 50 meters, a sport that began in Europe during the late 19th century. Pistols made for the sport had to meet several regulations but there were no rules surrounding trigger weight, weapon weight or the guns general dimensions hence the designation as a free pistol or freie pistole in German. This gun has proof marks from the Imperial German-era indicating it is an early example. The pistol has has a refinished barrel, plus the barrel has been drilled and tapped with accessory rails installed. Otherwise, the gun appears to be in its original configuration. The pistol remains mechanically sound and aesthetically pleasing. Good luck on your bid!