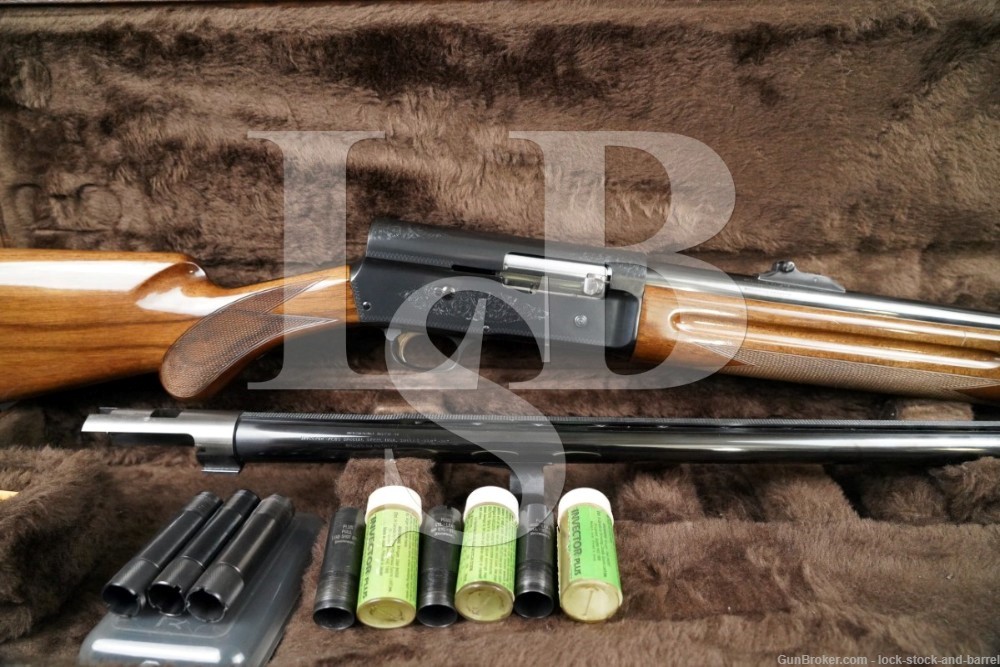 The underside of each barrel has a proof mark.

The bottom of the guard is marked with a Browning logo in gold fill and the buttplate is marked “BROWNING”. Tasteful grade-1 engraving can be seen on the receiver and upper grip tang.

Barrel Length: There are two barrels included. 24”, and 26” with a ventilated rib.

Stock Configuration and Condition: The stocks are two-piece checkered walnut with a fluted straight comb, round-bottom pistol grip, and finger grooves running the length of the forend. There are scant handling marks in addition to very light scattered dings and drag lines that are evident on either side of the buttstock in addition to the more notable scuffs on the left side of the buttstock and the minor disruptions in the checkering on the left side of the grip. The checkering is otherwise well-defined. There are no chips or cracks. The LOP measures 14 1/2? from the front of the trigger to the back of the buttplate. The plate is free of any notable wear or damage. Overall, the stocks are in Fine-to-Excellent condition.

Bore Condition: The bores for both barrels are bright with no erosion.

Overall Condition: This shotgun retains about 98% of its metal finish. The 24” barrel has only minor handling marks but is otherwise free of any additional notable wear or damage; the 28” barrel has a small cluster of minor nicks on the left side about midway. The flats of the receiver have a few very light nicks through the finish. The screw heads are sharp with strong slots. Markings are clear. Overall, this shotgun is in Fine-to-Excellent condition.

Our Assessment: The Browning Automatic 5, most often referred to as the Auto-5, or even simply the A-5, is a recoil-operated semi-automatic shotgun designed by the legendary John Browning. The Auto-5 was the first mass-produced semi-automatic shotgun. Designed by Browning in 1898 and patented in 1900, it was produced continually for nearly 100 years by several makers with production ending initially in 1998 (other makers, on a much smaller scale have continued to produce the pattern). It features a distinctive high rear end, earning it the incongruous nickname “Humpback”. Browning originally presented his design to Winchester, to whom he had sold his rifle designs, but the company refused his terms. He then went to Remington, but the president of the company died while he was waiting to offer them the gun. Browning then took the gun to FN in Europe and, so confident was he of his design, that his first order was for 10,000 shotguns. The design was later licensed to Remington for their Model 11 and to Savage Arms for their Models 720 and 755. During WWII, production of the Auto-5 was moved to Remington alongside the Model 11 until FN could resume production after the war. From 1976 to 1998, Auto-5 production was taken up by Miroku in Japan. And is often the case with items produced in Japan, there is a certain beauty, a certain grace inherent in the work. While Miroku’s Auto-5’s are built on the Browning patent, the bluing is that much richer, the wood is that much finer, and the overall presentation is laudable, as the included padded briefcase will attest. This example was produced in 1996 and will ship with two barrels—one traditional 26” and the other a 24” fitted with rifle sights for those who love to shoot slugs. The overall package is versatile, ideal for either terrestrial and aerial game of the larger variety. Good luck and happy bidding!