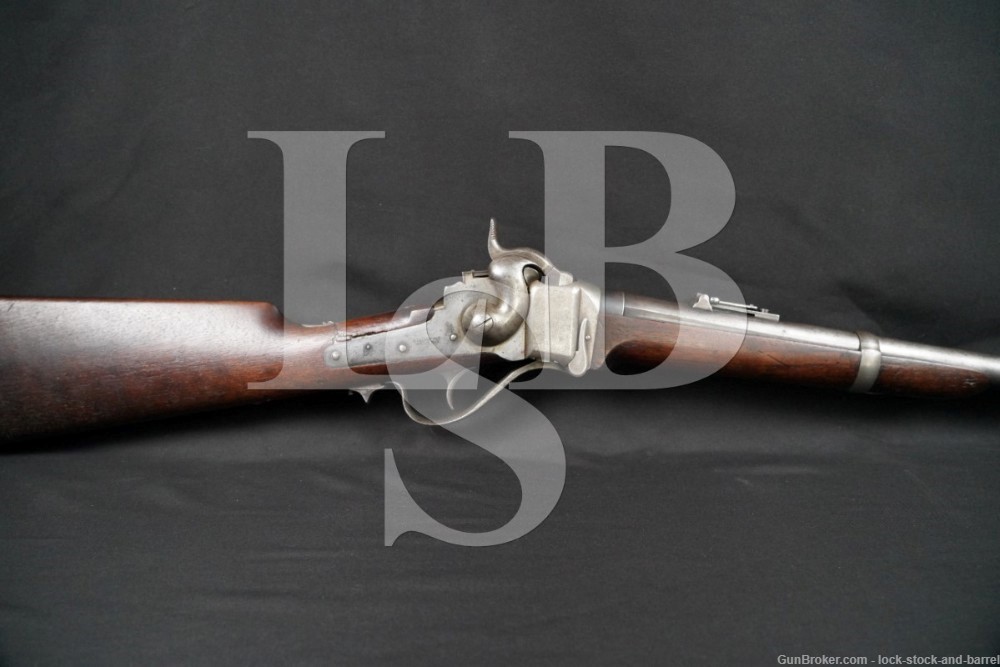 Stock Configuration & Condition: The stocks are two piece smooth wood with a banded forearm, straight grip and comb, and a carbine buttplate. There is a repaired crack on the right side of the wrist. There are scattered nicks, scratches, and compressions. There are a couple more notable compressions in the belly and at the front of the forearm. There is a gash exposing newer wood on the left side of the wrist. There is a split in the wood on the right side of the wood. The LOP measures 13 7/8” from the front of the trigger to the back of the buttplate, which shows erosion and light pitting. The stocks rate in about Good overall condition as Antique and repaired.

Bore Condition: The bore is mostly dim and the rifling is well defined. There is scattered erosion and pitting in the bore.

Overall Condition: This rifle retains about 5% of its metal finish. The balance of the finish shows little nicks, dings, and scratches throughout the metal surfaces. The case coloring has muted entirely. There is light erosion scattered on the receiver and bottom metal. There are trace amounts of blue on the barrel at the front and rear. There is scattered surface erosion and light pitting throughout the various surfaces. The screw heads are serviceable. The markings are clear. Overall, this rifle rates in about Good-Plus condition as Antique.

Mechanics: The action functions correctly. The action closes tightly. We did not fire this rifle. As with all used firearms, a thorough cleaning may be necessary to meet your maintenance requirements.

Our Assessment: From the NRA Museum Website, “During the Civil War, the Federal government bought over 80,000 Sharps carbines and nearly 10,000 Sharps Rifles. These arms were highly regarded by the troops who used them. Sharps Carbines found favor with Federal cavalry troopers, and New Model 1859 Rifles were used with great success by famous infantry units such as Colonel Hiram Berdan’s U.S. SharpShooters, perhaps the first specialty troops in the history of modern warfare, as well as the 5th New York (Duryea’s Zouaves) and the 13th Pennsylvania Reserves (Bucktails). Even the Confederate government recognized the superiority of the New Model 1859 Carbine, contracting with the Richmond firm of S.C. Robinson for the production of 5,000 copies. The New Model 1859 was followed by the New Model 1863 and New Model 1865 Carbines and Rifles. These were nearly identical to the New Model 1859, differing primarily in barrel stampings, the omission of buttstock patchboxes, and in the design or absence of bayonet lugs. Many versions of all three arms were later converted for use with .50-70 and .52-70 caliber metallic cartridge ammunition in the years following the Civil War.” This is a New Model 1865 converted for use with .50-70 rounds. It is in about Good-Plus condition as Antique and would make an excellent addition to a civil war era collection. Please see our photos and good luck!