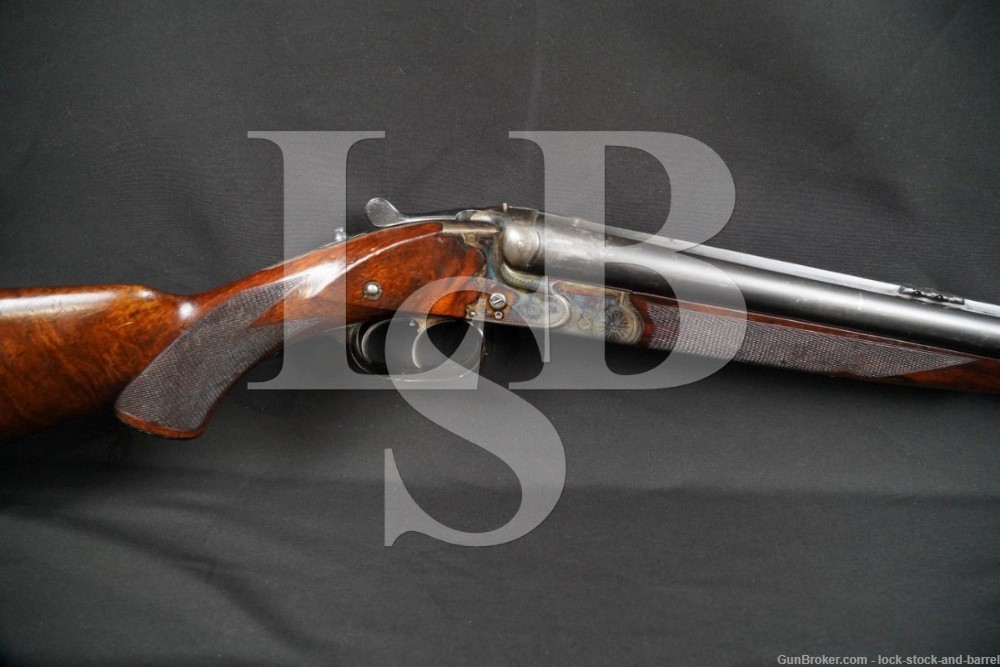 Make: There is an “OW” or “OM” marking on the receiver, but we suspect that this is a Guild Gun due to the lack of any obvious Maker’s markings.

Gauge: The shotgun barrels are 16GA with 2 ½” chambers. The rifle barrel has markings which would indicate a 7.8x57mm cartridge, but we were not able to find a cartridge in our reference collection which would fit the chamber. The chamber should be cast to confirm the cartridge prior to firing.

Markings: The bottom of the rifled barrel is marked with German proof and inspection marks, “7,8mm / 57” (see Our Assessment), “8 26 / 188”. The shotgun barrels and flats have German proof marks including Nitro proofs. The left shoulder of the receiver is marked with German proof marks, the right shoulder has an “OW” or “OM” monogram (possibly WO or MO). The receiver has scroll and border engraving, with the motif continuing on the lever, forend iron, forend latch assembly and the lid of the cartridge compartment in the stock’s comb. The top of the receiver is matted.

Stock Configuration & Condition: The stocks are two piece checkered walnut. The forend is a splinter profile with a schnabel tip. The buttstock has a capped pistol grip and serrated horn buttplate. The stock is a “cripple stock” which has a rather severe cast to allow a right-handed shooter to sight down the barrels with their left eye. There is a steel trap-door in the comb covering a compartment which can hold four rifle cartridges. The door is supposed to spring open when a button is pressed on the left, but it is a bit sticky. There is a sling swivel in the belly and another mounted to the bottom of the barrel rib forward of the forend. The stocks have light nicks, scratches and scuffs scattered throughout with a few more notable dings and bruises. There are no chips or cracks. The checkering is well defined. The LOP measures 14 1/8? and 13? from the fronts of the triggers to the back of the buttplate. The plate has scattered light wear and some grain-line cracking. Overall, the stocks are in Very Good condition.

Bore Condition: The rifle bore is bright with sharp rifling and no erosion. The shotgun bores are mostly bright with infrequent minor erosion. The right barrel has a few minor dents on the side, barely visible in the bore toward the muzzle-end.

Overall Condition: This drilling retains about 85% of its metal finish. The finish is thinning at all edges. The barrels have generally strong finish with some scattered light nicks, scuffs, scratches and patches of finish wear at the chamber-end. The receiver’s case color is still generally strong with wear on the fences and around the bottom edges. The exposed portions of the forend iron and latch have mostly worn to white. The action shows operational wear. The screw heads range from sharp to lightly tool marked with strong slots. The markings are clear. Overall, this drilling rates in Very Good condition.

Mechanics: The action functions correctly. The barrels lock up to the receiver with no play. The safety is on the left side of the wrist above the triggers and blocks them when on. The selector switch for the barrels is on the upper tang. With the rifle barrel selected, the front trigger is used to fire the rifle barrel and can be pushed forward to set the trigger, but the left shotgun barrel can still be fired using the rear trigger. We have not fired this drilling. As with all used firearms, a thorough cleaning may be necessary to meet your maintenance standards.

Our Assessment: This drilling appears to be a Guild Gun, produced by apprentice gunmakers and sometimes assembled with parts from different maker’s shops. The only maker’s markings we could identify on this gun is a monogram of an O and either an M or a W. This example has two 16 GA barrels choked Full and a rifled barrel which is chambered for a rimmed, bottleneck cartridge of about .30 caliber, though we have not been able to determine exactly what cartridge the barrel is chambered for. The shotgun chambers are 2 ½” in length, meant for the old 65mm rounds, not the 70mm rounds made today. The barrels are blued and the receiver is case colored. A distinguishing feature of this gun is its “cripple stock”, which is designed for a right-handed shooter who is left-eye dominant. While it has a rather eye-catching appearance, it is a wonderful solution for those who are cross-dominant. The wood work is impressive, as is the skillful workmanship on the horn trigger guard which follows the turn of the wrist quite well. The receiver is scroll engraved with the motif continued on the forend iron, lever and the cover for the storage compartment in the comb which can hold an additional four cartridges. This drilling is in Very Good overall condition. It has wear consistent with a gun which has seen time in the field, but also was well maintained. This is a classic drilling, perfectly set up for someone who likes to hunt upland game as well as deer, but happens to be cross-dominant. It will also make a nice addition to a collection of classic German hunting guns or drillings, specifically, given its scarce configuration. Please see our photos and good luck!