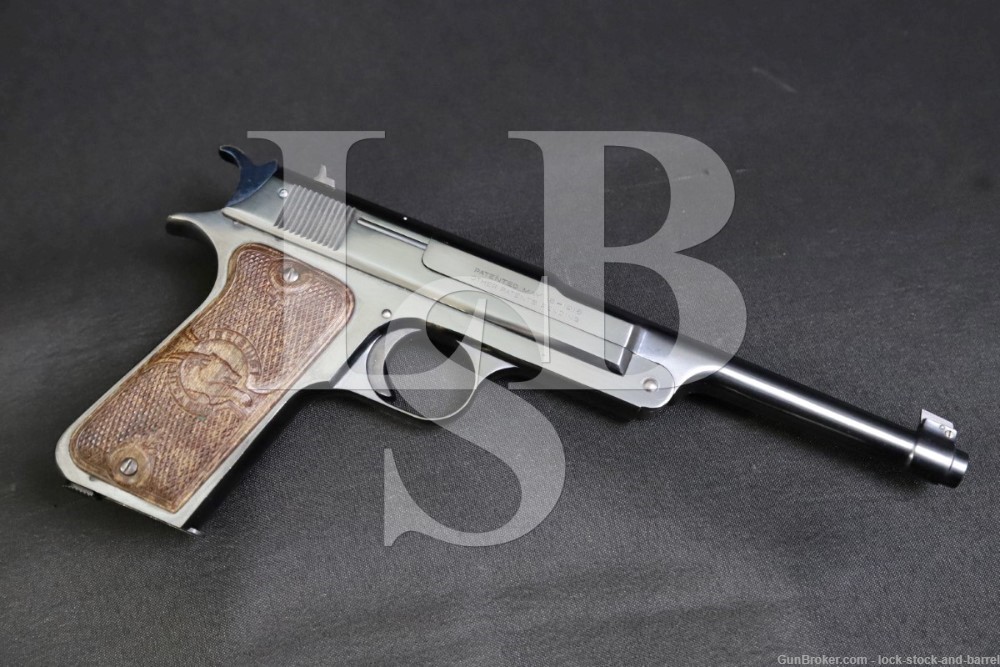 Stock Configuration & Condition/ Grip: The grip panels are two-piece checkered faux-wood style hard rubber panels. The grip panels have some light handling marks but the pattern obscures any imperfections. There are no chips or cracks. The checkering remains sharp. Overall, the grip panels are in Fine condition.

Overall Condition: The pistol retains about 98% of its metal finish. There are some light handling marks, but the pistol lacks any notable defects. The markings remain clear. The screwheads have some light tool-marks, but they remain serviceable. Overall, the pistol is in Fine condition.

Mechanics: The action functions correctly. The slide to frame fit is snug. The barrel can be tipped forward in order to use the gun as a single-shot pistol and to make cleaning the gun easier. We have not fired this pistol. As with all used firearms, a thorough cleaning may be necessary to meet your maintenance requirements.

Box Paperwork and Accessories: The pistol comes with a single 12-round magazine. The magazine has standard marks but there is no finish on the top-half of the magazine. Overall, the magazine is in Very Good condition. Please note, the magazine will not be included for purchasers who reside where it cannot be legally transferred.

Our Assessment: This is a Reising Arms Company single action target pistol chambered for .22 LR rounds.

Eugene Gustavus Reising was an American arms designer who invented a number of fascinating weapons. He was born in New York in 1884.  Reising’s first job in the gun industry was with Colt where he worked his way up from an assembler to a firearms designer. While with Colt he worked alongside the legendary John Browning to help develop the Colt Model 1911, one of the most iconic handgun designs of all time. He helped Colt market the M1911 pistol to the US Army by giving demonstrations of the pistol’s capabilities. Reising was fired by Colt in 1913, allegedly for using a Luger in a pistol competition. He then designed a machine gun for The Hartford Machine Gun Company, but the project went nowhere. In 1919 Reising founded his namesake gun company which manufactured a unique semi-automatic target pistol chambered for .22 LR rounds (what we have on auction here). He operated two companies which solely distributed his signature design until 1925.

In 1925 Reising was incarcerated for having violated the Sullivan Act, he allegedly sold silencers which were banned by the legislation to criminals in New York, and served two years. Following his incarceration, Reising kept a low profile until the end of the 1930s. Finally, in 1938 he began working on a new weapon design, a submachine gun. The following year Reising was hired by Harrington & Richardson (H&R) as a firearms designer. While at H&R, Reising completed his submachingun design, his now famous Model 50 submachine gun which was used by the US Marine Corps in WWII. The gun spawned several variants including the Model 65 training rifle. Reising would continue to develop new designs in collaboration with H&R before passing away in 1967 at the age of 82. This is Reising’s first signature design to hit the market. The specimen is aesthetically pleasing and remains mechanically sound. This is a unique design by one of the most under-appreciated weapons designers of the 20th century. Good luck on your bid!