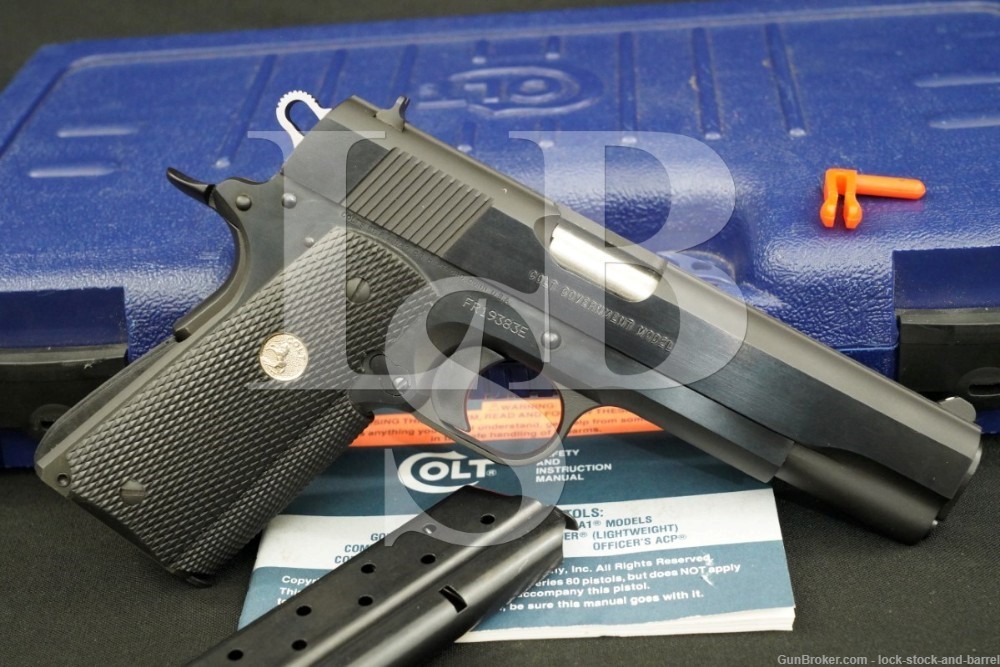 Stock Configuration & Condition: The grip is a one-piece checkered black rubber wraparound grip with silver-colored Colt medallions on each side. The grip has no notable wear or damage, only light handling marks. There are no rips or tears. The checkering is sharp. Overall, the grip is in Excellent condition.

Overall Condition: This handgun retains about 99% of its metal finish. There is no notable wear or damage, only light handling marks. The screw heads are sharp. The markings are clear. Overall, this handgun is in Excellent condition.

Mechanics: The action functions correctly. The slide has barely perceptible play to the frame. The trigger is crisp. We did not fire this handgun (though we wish we did!). As with all used firearms, a thorough cleaning may be necessary to meet your maintenance requirements.

Box, Paperwork & Accessories: This pistol comes in a blue plastic foam padded Colt box with serial matching end label, manual, chamber flag and a total of two 9-round magazines. The magazines have no notable wear with intact feed lips and strong springs.

Our Assessment: Have you ever though that .38 Super just wasn’t super enough? Well, that’s what John Ricco of CP bullets thought in 1992 when he first submitted a patent for an improved 9mm cartridge, the 9x23mm. After Ricco had Winchester make him some prototype casings, the company made the predictable (if not strictly ethical) decision to modify the casing slightly and introduce their own 9x23mm Winchester cartridge. Launched in 1996, the 9×23 Winchester was aimed squarely at IPSC/USPSA competitions where competitor’s cartridges had to meet a minimum power factor or face scoring penalties. Due to the effect of the power factor on scores, “making major” was a very important competitive edge, but typically involved using .40 S&W or .45 ACP, limiting the capacity of magazines. The .38 Super could also be loaded to make major, but the cartridge was getting a little long in the tooth, having a vestigial semi-rimmed case which was prone to feeding issues in double-stack magazines as well as being originally designed for pressures which were high in 1929, but a little pedestrian in the 1990s. The 9×23 Winchester had a reinforced case-wall to handle pressures up to 55,000 psi as well as being a rimless case. The additional pressure would also give an advantage to those using compensators as it allowed their vents to generate more force to reduce recoil and keep the pistol on target for fast double-taps. Unfortunately for Winchester and their 9×23 cartridge, Ricco sued the company and the lawsuit lasted seven years. In the intervening time, IPSC/USPSA had lowered their power factor to remove the incentive for competitors to load .38 Super or 9×19 cartridges well past safe pressures in order to make major, somewhat negating the need for the new cartridge. As a result, there were only a few years in the 1990s when companies such as Colt would produce pistols chambered for this new cartridge, and this is a nice example. A MK IV Series 80 Government Model Enhanced, this pistol has many of the common upgrades found on custom 1911 pistols including a beavertail grip safety, under-cut trigger guard, and skeletonized hammer. This pistol looks for all the world like it was purchased and then put away. The luster of the bluing on the flats of the slide is of a quality known to Colt fans everywhere, the magazines show little to no sign of use. This would make a great addition to any 1911 collection as the 9×23 Winchester Colts saw quite limited production. While this pistol in its high condition is likely of greater interest to collectors, it would also make a fine defensive pistol. Please see our photos and good luck!