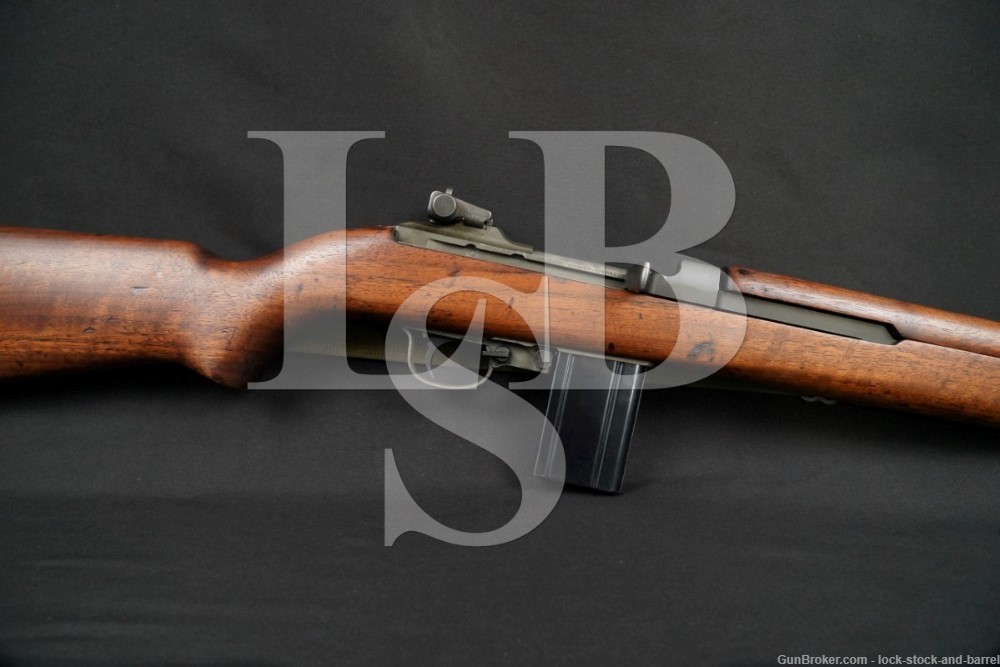 Stock Configuration & Condition: The two piece hardwood stock has a pistol grip, Type IA barrel band with sling loop, sling well, sling pass through and a metal buttplate. The buttplate shows small scrapes. The wood shows numerous scrapes, scratches and compression marks. Several have damaged or removed small portions of the surface wood. These marks have been oiled; many have darkened with age. The LOP measures 13 ¼ inches from the front of the trigger to the back of the buttplate. The stock rates in about Very Good overall condition.

Bore Condition: The muzzle and grooves are semi bright. The rifling is sharp. There is fouling in the grooves that should clean up a bit. There is light intermittent erosion in the grooves at the muzzle. The bore shows an M.E. of 1.7.

Box, Paperwork & Accessories: The rifle comes with a 15 round magazine. It shows scrapes and thin scratches. It is in about Very Good Plus condition.
The 15 round magazine is not available to residents of California or any other state with magazine capacity restrictions.

The Rock-Ola Manufacturing Corporation was a top maker of jukeboxes. Starting in 1935, Rock-Ola sold more than 400,000 jukeboxes under the Rock-Ola brand name. It is thought to have inspired the term Rock & Roll. During WWII Rock-Ola was one of the many companies who helped with the war effort. Rock-Ola only produced about 3.7% of the total number of wartime M1 Carbines. Due to both the relative rarity of Rock-Ola M1 Carbines and the distinctive name, Rock-Ola M1 Carbines prized among collectors.
This Rock-Ola M1 Carbine was made back in 1944. It has been rebuilt but still retains many of its original Rock-Ola parts including its “ROCK-OLA” marked barrel. The rifle looks good and can do lots of work out at the range. This Rock-Ola M1 Carbine will make a nice addition to your collection. Good luck.