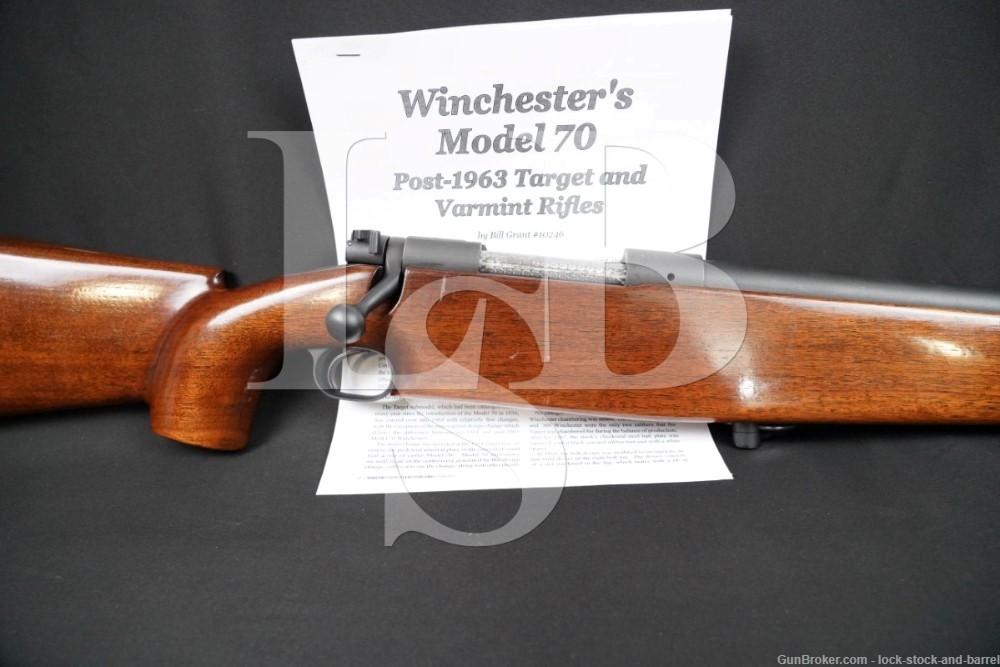 Year of Manufacture: The receiver’s serial number indicates that it was made in 1967. The “G” prefix was added in or after 1968. This configuration was not cataloged by Winchester until 1970.

Barrel Length: 24″, Heavy Profile with Counter-Bored Muzzle. Approximately 1.14″ at the front edge of the receiver tapering to 0.83″ at the muzzle.

Stock Configuration & Condition: The stock is a distinctive International Army Match style. The stock is one-piece smooth walnut with a deep, but fairly narrow forend, contoured pistol grip, monte-carlo comb with cheekpiece, serrated black rubber Winchester buttpad, a sling swivel on the butt and a 10″ accessory rail inlet to the bottom of the forend. There is an adjustable sling swivel installed on the accessory rail. The receiver and chamber section of the barrel are glass-bedded with the barrel free-floating forward of the chamber. The right side of the stock shows scratches below the receiver. The top of the butt shows a scratch. The accessory rail shows light wear. The wood shows other scattered scrapes, scuffs & handling marks. There are no chips or cracks. The LOP measures 13 inches from the front of the trigger to the back of the buttpad. The pad shows minor wear. The pad spacer shows light discolraion. Overall, the stock is in Very Good Plus to Fine condition.

Bore Condition: The bore is bright with sharp rifling. There is no erosion in the bore. Our gauge shows an ME of about 1.

Overall Condition: This rifle retains about 97% of its metal finish. The metal shows scuffs and a few light scrapes. The top front of the reciever shows a patch of oxidation. The top and left side of the receiver have areas of surface erosion showing through the finish.
This rifle has a factory finish. The 1967 dated Model 70 recevier was assembled into an International Army Match Rifle during the 1970’s. The receiver sat in a inventory for a few years prior to assembly and rusted. The receiver was eventually cleaned & refinished by Winchester prior to assembling the rifle.
The markings are clear. Overall, this rifle is in Very Good Plus to Fine condition.

Mechanics: The action functions correctly. We did not fire this rifle. As with all used firearms, a thorough cleaning may be necessary to meet your maintenance standards.
There are two holes in the top-rear of the receiver for the externally adjustable trigger. There is a safety mounted on the rear of the bolt. Pushed to the front, the safety is OFF. Rotated back all the way, it locks both the bolt and the trigger. If pulled back half-way, it blocks only the trigger.

Box, Paperwork & Accessories: This rifle comes with a printout of the The Winchester Collector article “Winchester’s Model 70 Post-1963 Target and Varmint Rifles” by Bill Grant.

Our Assessment: The International Army Match is the rarest of the post-1963 Winchester Model 70 cataloged configurations. Available only on special order basis and constructed by Winchester’s Custom Shop, there were only 179 of these rifles made in the 10 years they were offered (1970-1979). Designed specifically to conform to the International Shooting Union’s Big Bore Standard Rifle specifications, the International Army Match has a couple of rare features found only on a few other Model 70 configurations and a very unique stock.

Like the Palma Trophy Match and the Ultra Match rifles, the action and the rear of the barrel were bedded with the remainder of the barrel floated and the International Army Match had an externally adjustable trigger. Its 24″ heavy barrel has a deep counter-bore to protect the crown. Given its blind magazine, somewhat necessary due to the depth of the forend, it is nice that the receiver has a clip-guide allowing feeding via stripper clips. .308 Winchester was the only chambering offered in the Winchester catalog for the decade this model was produced, though there have been at least four examples known to be chambered for .30-06, each built on a pre-68 receiver with the “G” prefix added when the rifles were assembled. This is one of those four rare rifles.

An article in The Winchester Collector by Bill Grant, “Winchester’s Model 70 International Army Match and Ultra Match Rifles”, lists this as one of four observed .30-06 International Army Match rifles by serial number. This model wasn’t introduced to Winchester’s catalog until 1970, but the four rifles have serial numbers which would place their years of manufacture in 1965, 1966 and 1967. This not only pre-dates the model’s introduction, it predates the “G” prefix found on each of the four rifles which was added to the Model 70 serial numbers to comply with the Gun Control Act of 1968, indicating that the receivers had been made and serial-marked, but were assembled into International Army match rifles years later.

This exceedingly rare .30-06 International Army Match is in Very Good Plus to Fine condition. The rifle has a great bore and strong mechanics.
The rifle has all of the correct features and markings of the International Army Match rifles and will make an addition to a Winchester collection or a collection of long range competition rifles that will enhance even the most advanced of such collections. With as few as four of these rifles made, an opportunity such as this doesn’t come by every day. Please see our photos and good luck!