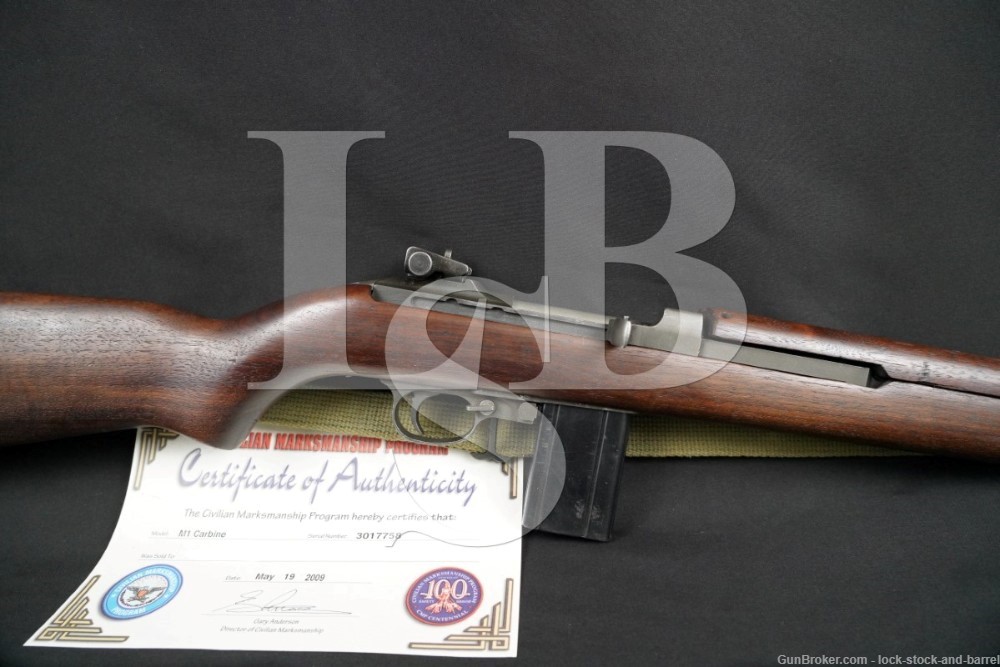 Model: M1 Carbine
After WWI this M1 Carbine was provided to the Austrian Gendarmerie (Police). See www.bavarianm1carbines.com/Austria.html for more info.

Stock Configuration & Condition: The stock has a pistol grip, Type III barrel band with sling loop & bayonet lug, sling well, sling pass through, and a metal buttplate. The buttplate shows small scratches, discoloration and surface erosion. The wood shows scattered scrapes & scratches. The handguard shows deep scrapes which have removed small amounts of the surface wood. The LOP measures 13 3/8 inches from the front of the trigger to the back of the buttplate. The stock rates in about Very Good Plus overall condition.

Overall Condition: This rifle retains about 93% of its metal finish.
The left side of the receiver shows scrapes & thinning under the wood. The barrel shows thin scratches. The sides of the trigger group show small scrapes. The right side of the receiver and the bolt show light operational wear. The remaining metal shows small scapes and handling marks. The markings are deep. Overall, this rifle rates in about Very Good Plus condition.

Box, Paperwork & Accessories: The rifle comes with a 15 round magazine that shows scrapes & light scratches as well as a patch of surface erosion. It is in Very Good condition.
The rifle has a green canvas sling attached. It shows soiling and discoloration as well as surface erosion on the metal. It is in Very Good condition.
The rifle comes with a “Certificate of Authenticity” from the “CIVILIAN MARKSMANSHIP PROGRAM”. It lists the rifle’s serial number. The owner’s name is covered in white out. It is in about Fine condition.
The 15 round magazine is not available to residents of California or any state with magazine capacity restrictions.

Our Assessment: The M1 Carbine was developed and produced after WWII started. Over 6 million were made by a number of U.S. companies to assist with the all out war effort. The M1 Carbine was widely issued to U.S. Military Forces which numbered over 16 million during WWII. The M1 Carbine contributed greatly to U.S. efforts during WWII.
The Inland Manufacturing Division of General Motors was organized in 1922 for the manufacturing of steering wheels. During WWII Inland Division was one of many facilities that tooled up to manufacture M1 Carbines for the war effort. Inland produced the majority of WWII M1 Carbines, about 43%, and contributed greatly to the war effort. Inland M1 Carbines were used by millions of soldiers during WWII in numerous battles. If you see WWII footage that includes an M1 Carbine, it is most likely an Inland M1 Carbine.
This Inland M1 Carbine was made back in 1944. At some point it was rebuilt but we do not know if it was rebuilt in Austria.  After WWII the rifle appears to have served in Austra for the Gendarmerie (Austrian Police). The bottom of the trigger guard is stamped with markings for the Austrian state of Steiermark. The rifle was purchased through the CMP and comes with a Certificate of Authenticity. This is a good looking M1 Carbine to add to your collection. Good luck.
For more Austrian M1 Carbine info see: www.bavarianm1carbines.com/Gendarmerie.html