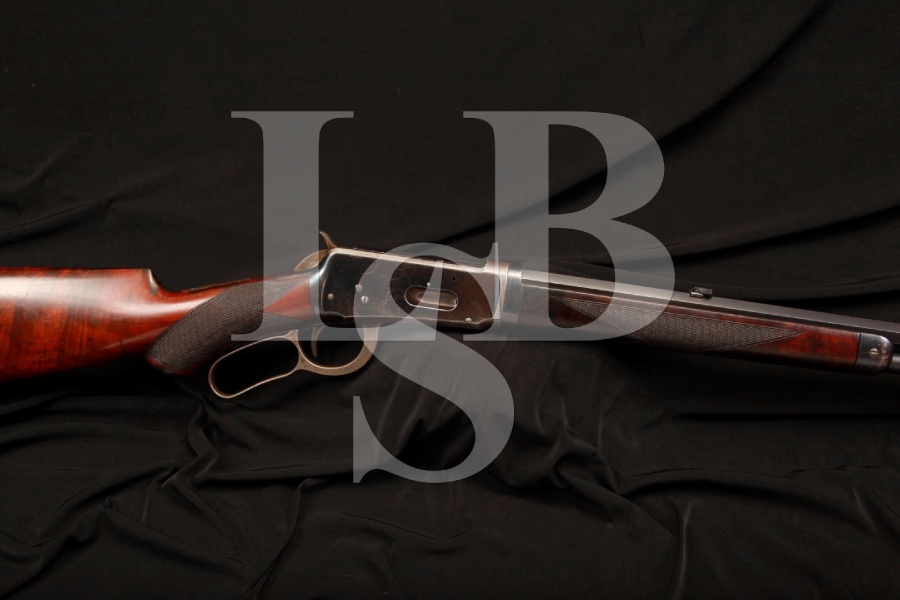 Markings: The top of the barrel is marked “MANUFACTURED BY THE WINCHESTER REPEATING ARMS CO. / NEW HAVEN, CONN. U.S. A. PATENTED AUGUST 21. 1894” and at the receiver with a circled “WP” proof and “32-40”. The barrel markings, with Patented and August spelled out and the use of the “WP” proof indicate that this barrel was a Type III, first introduced in about 1904 at around serial number 300,000 and used to about 1908. The top of the receiver chamber ring is also marked with a circled “WP” proof. The bottom front of the receiver is marked “29252”. The top tang is marked “MODEL 1894 / WINCHESTER / PAT. AUG. 21. 1894” (The tang markings and receiver screw/pin locations are consistent with a 1895 produced rifle). The lower tang just in front of the trigger is marked “O”.

Barrel Length: The octagon barrel is 26” in length.

Sights / Optics: This rifle is mounted with a folding “U” notched semi-buckhorn sight dovetailed into the barrel. The sight has a fine adjustment for elevation. The front sight is folding sight that is dovetailed into the barrel. When the sight is folded down, a rectangular post sight is presented. The post has a small piece of deformed metal on its top surface which appears to have been a bead. When the sight is folded up, a ringed ball and pin is presented. The outside of the ring is marked “LYMAN REG US PAT OFF”. We believe the front and rear sights to be Lyman No. 5 and 6, respectively. There is a drilled, tapped and filled hole in the upper tang for an aperture sight.

Stock Configuration & Condition: The two piece stocks are checkered fancy burled walnut with a pistol grip and crescent shaped steel buttplate. The pistol grip has a black hard rubber grip cap marked “Winchester Repeating / Arms Co.” and retained with an engraved screw. The forend has a blued steel nose cap. The buttstock shows oil staining around the receiver and buttplate, and the forend is dark with oil staining. The buttstock shows numerous shallow compression marks with deeper marks on the right side near the heel and along the top of the comb. There are also scratches behind the grip on the right side and compression marks on the right side of the wrist above the checkering. The forend shows a deep compression mark on its underside near the receiver, an area of scratches on the left side near the front of the forend and several light handling marks. The wood to metal fit is excellent. The checkering shows moderate to heavy wear with mars in both the grip and forend. There are no chips or cracks noted. The LOP measures 13 1/8” from the front of the forward trigger to the back of the buttplate. The buttplate fits the wood well, and shows small compression marks on its edges, surface loss with a light brown patina starting to form, and light handling marks. The buttplate is in about Very Good condition. The stock rates in about Fine overall condition.

Type of Finish: The rifle is blued. The lever and the hammer were case colored.

Bore Condition: The bore is dark and the rifling shows moderate wear. There is a ring of light erosion in the grooves about 2” from the muzzle.

Overall Condition: This rifle retains about 75% of its finish. The right front of the barrel and magazine tube both show wear and compression marks, with a compression mark on the left front edge of the barrel. The right side of the front sight shows compression marks, its ring is disfigured, and the bead on top of the post is disfigured. There are two deep compression marks on the right side of the barrel behind the front sight and several compression marks on the left top edge from the muzzle to the forend. The barrel also shows several light handling marks, a spot of pinprick surface erosion on the left shoulder at the front of the forend and thinning and surface frosting on the top behind the rear sight. The forend nose cap shows compression marks, scratches, on the left side a brown patina is starting to form, along with a spot of erosion. The receiver and barrel extension show thinning, surface frosting and light handling marks. There are also a few small compression marks and scratches through the finish on the sides of the receiver, and a few spots of pinprick surface erosion on the right side. The magazine tube shows an area of thinning behind its hanger with several compression marks/gouges and scratches through the finish. The lever shows surface frosting, but still shows coloring on right side and upper surface. The hammer checkering shows moderate wear, and is correct for an 1895 produced rifle. The screw heads are mostly distressed and the hammer spring tension screw is missing. The rear tang screw is a replacement, likely from a previously mounted sight. The markings are clear. Overall, this rifle rates in about Fine condition.

Mechanics: The action functions correctly and the lever and bolt do not have any excessive play. The hammer has a half-cock safety. The rifle has adjustable double set triggers. Pressing the rear trigger forward does not cause a click or other indication of “setting”, so it may be out of adjustment, or perhaps even out of order. As currently adjusted, the triggers break crisply at 3 lbs. 12 ounces. We did not fire this rifle.

Our Assessment: The .32-40 W.C.F. cartridge began life in 1884 as the .32-40 Ballard, a new chambering for single shot rifles. When first developed, it was supposed to be combination hunting and target cartridge. But, although its accuracy was phenomenal, it left much to be desired as a hunting round compared to the .38-55 Winchester and .45-70 Government. Marlin began using the cartridge in its Model 1893 lever action rifle, and when Winchester released its Model 1894 rifle the next year, it was only chambered in .32-40 W.C.F. and 45-70 Govt. The round is great for varmints and coyotes and adequate for deer sized game up to 100 yards. Later, higher pressure smokeless cartridges were developed with much better trajectory, but nickel steel barrels used for smokeless powder were not used on 1894 rifles chambered in .32-40: only carbon steel ordnance steel was used. This takedown model rifle was made in the second year of production with a deluxe checkered pistol grip stock, complete with grip cap and engraved screw, and had double set triggers. The takedown model in and of itself is rare, and a combination of these rare options makes it an almost one of a kind rifle. However, the original barrel was replaced with a barrel whose markings indicate it was made in the 1904-1908 time frame, and we are not sure if the special order Lyman sights were ordered with the original rifle or installed later. See “Winchester Model 94” by Robert Renneberg for more information on barrel markings. The rifle is in about Fine overall condition with about 75% of its original finish remaining. The barrel and magazine tube show a several compression marks, and the receiver shows thinning and handling marks, with a few spots of pinprick surface erosion. This is a great find for the Winchester collector.