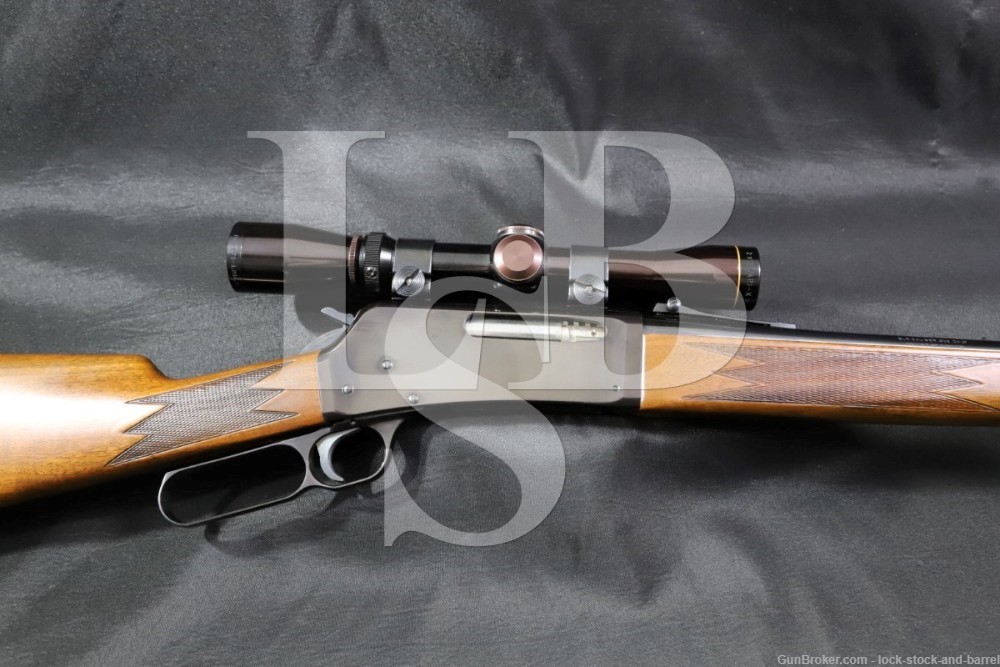 Markings: The left side of the barrel is marked “BROWNING ARMS COMPANY MORGAN, UTAH & MONTREAL P.Q. / MADE IN BELGIUM”. The right side of the barrel is marked “BLR CALIBER .308 ONLY / PATENT No. 3.377.731”. The bottom of the receiver is marked with the serial number just ahead of the lever and has a Belgian proof just ahead of the magazine release. There is a “lion / P.V” proof mark on the bolt.

Sights / Optics: The front sight is a hooded beaded blade that sits atop a serrated ramped riser which is fixed to the top of the barrel. The rear sight is a cylindrical square notch that is adjustable for windage and elevation that is screwed to the rear of the barrel. Equipped to the top of the receiver via two Weaver rings is a Leupold Vari-X II scope with 2-7x magnification and a duplex reticle. The scope shows a faint plum hue with some scattered faint marks. The lenses are clear. Overall, the scope rates in about Very Good condition.

Stock Configuration & Condition: The stocks are two-piece checkered walnut with a banded forearm, straight grip, straight comb, black rubber Limb Saver butt pad, and sling studs front and rear. There are some scattered little dings on the bottom of the forearm. The buttstock shows a few scratches throughout with a tiny chip bordering the sling stud in the belly. The checkering is well defined. There are no cracks. The LOP measures approximately 14” & 12 3/4” from the front of the trigger to the back of the butt pad and wood, respectively. The pad shows scattered rub wear and light discoloration the pad remains pliable. The stocks rate in about Fine-Plus overall condition.

Bore Condition: The bore is mostly bright and the rifling is sharp. There is some light erosion on the lands.

Overall Condition: This rifle retains about 97% of its metal finish. The receiver shows a faint plum hue on either side as well as some faint marks. There are a few small scuffs through the finish on the bottom of the barrel band. The pinheads are unmarred. The operational wear is minor. The markings are clear. Overall, this rifle is in about Fine-Plus condition.

Mechanics: The action functions correctly. The hammer has a half-cock safety. We did not fire this rifle. As with all used firearms, a thorough cleaning may be necessary to meet your maintenance standards.

Our Assessment: This FN made Browning BLR lever action rifle is fed via a removable magazine (not included), something you don’t see on most lever action rifles. The lever throw on this rifle is very smooth due to its gear-style mechanism, so this should really be a fast handling rifle. What makes it even more interesting is that the trigger is mounted in the lever, not in the receiver, which is nice so there is no danger of smashing your trigger finger if you leave it in the trigger guard when working the action. This example was manufactured in 1971 and is chambered for .308 Winchester. The 308 Winchester is one of the most popular hunting cartridges in the United States, and possibly the world. It has gained popularity in many countries as an exceptional cartridge for game in the medium-to-large sized class. Although in North America it is commonly thought that it is only recommended for whitetail deer, pronghorn and the occasional caribou or black bear, the 308 Winchester is among the calibers recommended for hunting brown and grizzly bears by the Alaska Department of Game and Fish. This rifle is in about Fine-Plus condition with a nice bore and smooth mechanics. Though she’s got plenty of life left in her for field use, this would also sit nicely in an FN Browning collection, as this rifle was produced before manufacture was switched to Miroku in Japan. Please see our photos and good luck!