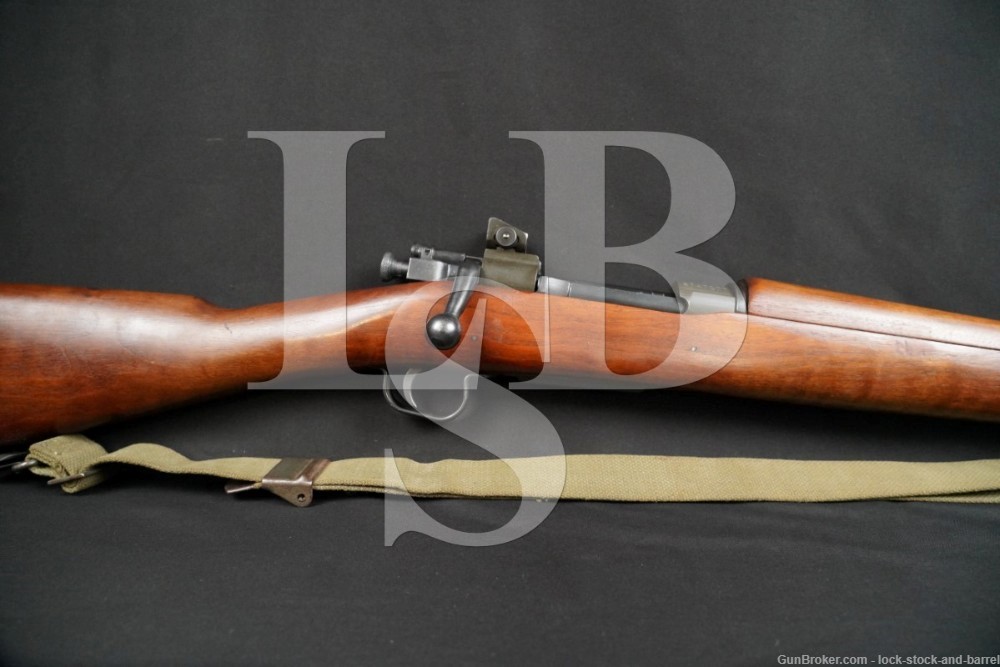 Markings: The top of the receiver ring is marked “U.S. / SMITH-CORONA / MODEL 03-A3 / 4747077”. The top of the barrel, just behind the front sight, is marked “S C” (Smith-Corona) above a flaming bomb (Ordnance Department marking) and features the date of manufcature “7 43” (July of 1943). The bolt handle root is marked “X” which indicates it was proofed. The portion of the forend, just ahead of the magazine’s front tang, is marked “5” inside a triangle, “3” inside a box, “3” inside a diamond and “7” inside a circle which are inspection markings. The forend is marked “G” and “P” inside a circle just behind the trigger guard. The left side of the forend is marked “FJA” inside a box which was the inspection marking for Frank J. Atwood adjacent to the Ordnance Department’s escutcheon (a pair of crossed cannons). The left side of the butt is marked “OG”.

Sights/ Optics: The front sight is a blade pinned to a raised banded base fixed by the muzzle. The rear sight is a fully adjustable aperture sight marked from “2-8” that is dovetailed to the top of the receiver.

Stock Configuration & Condition/ Grip: The stocks are two piece smooth wood featuring a hand guard, a metal nose cap with integral bayonet lug, two barrel bands with fixed sling swivels (the rear barrel band is secured by a spring), two reinforcing pins located beneath the receiver, a straight wrist, a straight comb, a sling swivel fixed to the belly and a metal buttplate which has a storage compartment. There are some light handling marks, nicks and scuffs on the stocks. There are no chips or cracks. The LOP is approximately 13” from the trigger to the rear end of the butt-plate. The butt-plate has some light finish loss around its leading edges. Overall, the stocks are in Fine condition.

Bore Condition: The bore is mostly bright with sharp rifling. There is some light erosion concentrated in the grooves. Our gauge gives us an ME of about 1.

Overall Condition: The rifle retains about 90% of its metal finish. There are some light handling marks, nicks and scuffs. Notably, there is light finish loss around the leading edges of the front sight and muzzle. There is also light finish loss on the bolt, concentrated on the leading edges, and some light handling marks on the trigger guard. The markings remain clear. The screwheads have light tool marks and remain serviceable. Overall, the rifle is in Fine condition.

Box Paperwork and Accessories: There is an olive drab sling attached to the rifle which is fixed to the sling swivels on the belly and rear barrel band. The sling has some light handling marks, nick and scuffs. Notably, there is some scattered light brown discoloration on the sling. Overall, the sling is in Very Good condition.

Our Assessment: This is a Smith-Corona manufactured M1903-A3 bolt-action rifle with fixed magazine that is chambered for .30-06 Springfield cartridges.

Following the Japanese attack on Pearl Harbor on December 7th, 1941 the United States was dragged into the Second World War (WWII). Germany and Italy declared war on the United States to support Japan (and it was no secret that the U.S. was supplying critical war material to England since the war in Europe began in 1939). The Roosevelt administration was quick to institute a war economy, and virtually every business was pressed into government service. Firearms production was naturally taken up by America’s prestigious gun manufacturers, but they simply lacked the capacity to meet the military’s needs. When High Standard was offered a contract to manufacture the M1903-A3 rifle, it was near its production limits and a compromise was reached. High Standard would manufacturer barrels for the M1903-13s while the L.C. Smith & Corona Typewriter Co. of Syracuse, New York would perform the production of the remaining parts and handle the assembly of the rifles. The Smith & Corona factory was situated near the Remington plant and the arms company agreed to assist Smith & Corona with technical aspects of rifle production. The proposal was agreed to by all parties by late february of 1942. The Smith & Corona/High Standard rifles proved themselves to be just as effective as the other M1903-A3 rifles in production and the contract continued for nearly two years. Ultimately, 234,580 Smith Corona M1903-A3 bolt-action rifles were manufactured. The Smith-Corona rifles were a testament to America’s greatest asset during WWII, its industry which was safely nestled between the Atlantic and Pacific oceans.

This particular Smith-Corona M1903-A3 remains beautifully preserved. It retains much of its metal finish with only light handling and storage wear. The markings on the barrel, receiver and stocks remain clear. Mechanically this rifle is sound and should prove a worthy companion to its next owner. This is a very well crafted WWII-era bolt-action rifle that you do not want to miss out on!