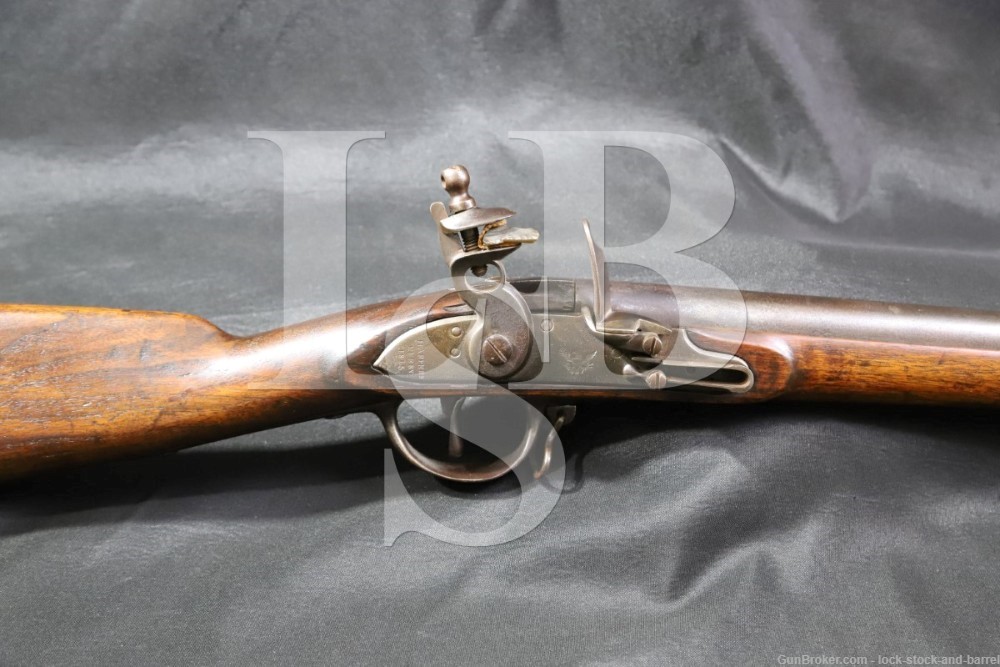 Sights/ Optics: The musket has a brass blade fixed to the front barrel band.

Stock Configuration & Condition/ Grip: The stock is one-piece wood featuring a bayonet lug at the top of the barrel near the muzzle, three barrel bands secured by springs, a slot in the forend for the included ramrod, a lock-plate, a straight wrist, a straight comb and a metal butt-plate. There is a sling swivel screwed in front of the trigger guard and one fixed to the bottom of the middle barrel band. The stock has light-moderate handling marks, nicks, compressions and scuffs. Notably, there is moderate handling wear on the portion of the stock between the hammer and top-tang and a small chip between the front of the lock-plate and barrel. Also, there is a small and very light crack that originates at the top-tang and extends slightly onto the wrist and there is moderate handling wear around the center barrel band’s spring. The LOP is 12.5” from the trigger to the rear end of the butt-plate. The butt-plate has some moderate handling marks and is covered in erosion. Overall, the stock is in Very Good condition for an Antique.

Overall Condition: The musket has no metal finish. The metal parts of the rifle are coated in light-moderate oxidation and have taken a patina color. The musket has light-moderate handling marks, nicks and scuffs. Notably, the rear end of the barrel is coated in erosion, there is a patch of light nicks ahead of the rear barrel band and some moderate wear around the muzzle. The markings remain clear. The screwheads have tool-marks but they remain serviceable. Overall, the musket is in Fair-Good condition as an Antique.

Mechanics: The hammer does not reach the pan when the action is engaged, likely due to a faulty mainspring. Otherwise, the action functions correctly. We did not fire this musket. As with all previously owned firearms, a thorough cleaning may be necessary to meet your maintenance standards.

Our Assessment: This Harpers Ferry Model 1795 flintlock musket, type III is a .69 caliber muzzleloader that was manufactured in 1815. The Harpers Ferry Model 1795’s production was divided into four types; the first two types had serial marked barrels and were manufactured until 1812. The type three was introduced in 1812 and was manufactured until early 1815, it was distinguished because the barrels were no longer serialized. The type four was introduced later in 1815 and was distinguished by a shorter 42” barrel while all earlier variants had 44”-45” barrels. This musket would be replaced a year later by the Model 1816 which remained in production until 1844. Many of the flintlocks rifles in American armories were converted to percussion muskets, although a significant number of flintlocks were pressed into service by the Confederates during the early stages of the Civil War. This historically relevant US military musket from the early years of our republic should prove a wonderful addition to any collection. Good luck on your bid!