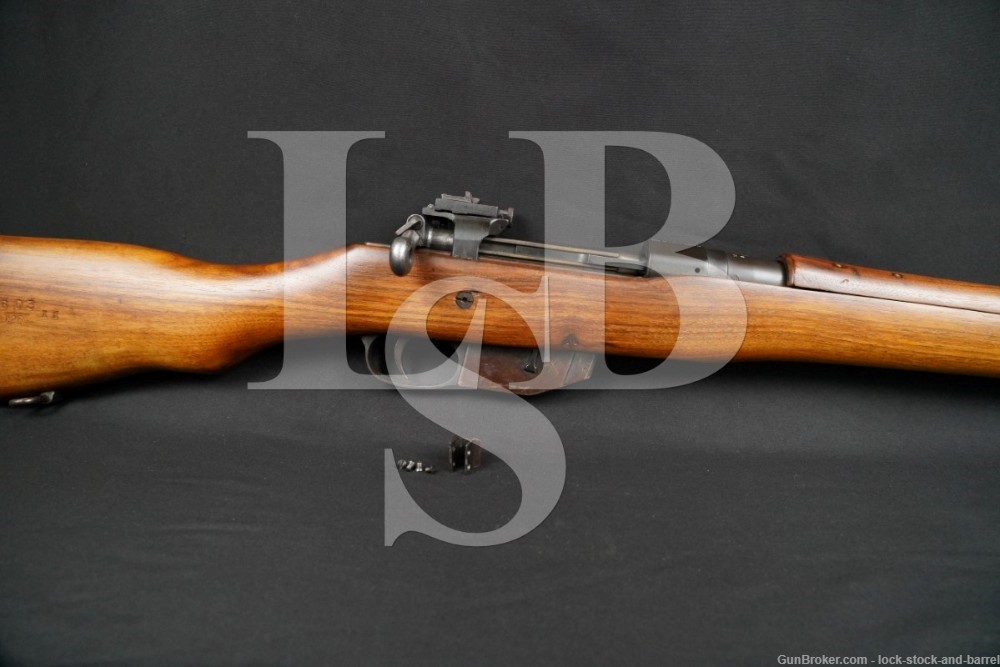 Markings: There is no visible import mark. The receiver and barrel shank do not have an identifying number on them. The identifying number on the bottom metal “1017” is the serial number. The top of the receiver is marked “ROSS RIFLE CO. / CANADA / M-10 / PATENTED”, “crown / 9” and with a “crown / crossed flags / DCP” Dominion of Canada proof. The barrel shank is marked with inspection stamps and with a Dominion of Canada proof. The safety lever is marked “SAFE READY”. The bolt handle markings include “LH8”, “3”, a “crowned” inspection stamp and “crossed flags”. The top of the bolt body is marked with a “crowned” inspection stamp. The bottom of the grip is marked “471 / Z”. The right side of the butt is marked “III”, “603 / 1916”, “K N” and with a faded roundel.

Stock Configuration & Condition: The hardwood stock has a pistol grip, nosecap with bayonet lug, stacking loop, 2 sling loops, and a metal buttplate with hinged door for storage. The buttplate shows several small scrapes & scratches as well as discoloration. The rear of the handguard shows a crack that flex slightly when pressure is applied. The stock shows several scrapes & scratches. Most of the marks are light but some of the marks have damaged small portions of the surface wood. The stock has been oiled. The LOP measures 13 1/4 inches from the front of the trigger to the back of the buttplate. The stock rates in about Very Good Plus overall condition.

Box, Paperwork & Accessories: The original front sight hood and screws are included in the auction. It shows scrapes & discoloration. It is in Very Good condition.

Our Assessment: This Canadian Ross Mk III Rifle (M-10 Rifle) was made sometime between 1914 and 1916. Its fixed magazine sets it apart from the earlier Ross Mk I & Mk II rifles. About 400,000 MkIII rifles were produced and many served during WWI. This M-10 is over 100 years old and still has nice deep markings on the receiver & barrel. The wood has been oiled and the metal has been treated with cold blue. The rifle looks good and can still do a ton of work at the range. Good luck.