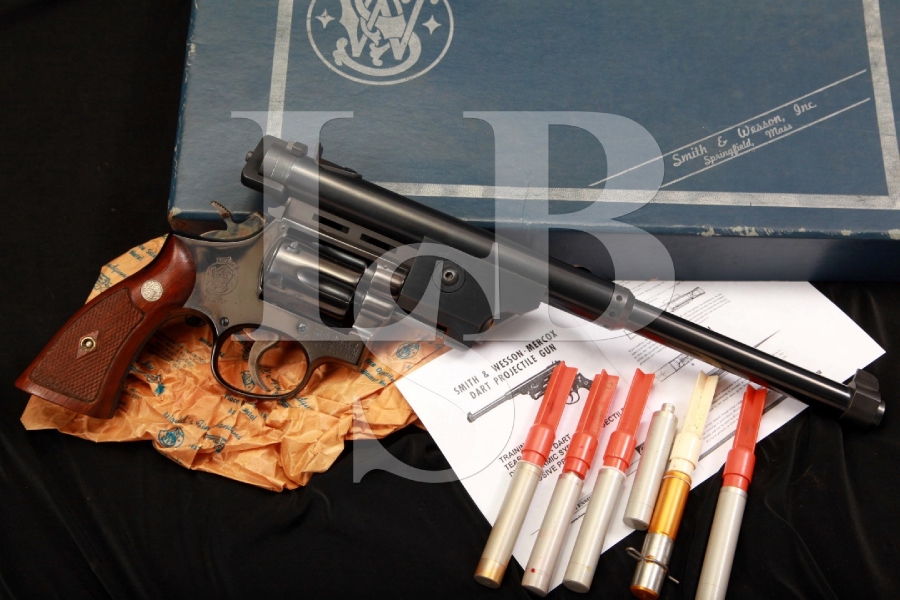 Barrel Length: 12 ¼” as measured through the barrel against the locked breech.

Sights / Optics: The front sight is a Patridge style blade integral with the barrel band. The rear sight is a fixed square notched blade.

Stock Configuration & Condition: The Magna style grips are checkered walnut with the diamond at the grip screw and a silver colored S&W medallion at the top. The grip panels show only the lightest of handling marks with no chips, cracks or scratches. The inside of the right grip panel has “632371” pressed into the wood. The grips rate in about Excellent overall condition.

Bore Condition: The smoothbore is bright and there are longitudinal marks visible, which appear to start just ahead of the projectile and are about 4” long. There is no erosion in the bore.

Overall Condition: This handgun retains about 90% of its metal finish. There is an about 1” x ½” patch of erosion centered on one of the cylinder flutes. There is another patch of erosion at the forward bottom corner of the grip frame and a single pinprick of erosion on the right sideplate. There is very little in the way of handling marks and there is virtually no drag line on the cylinder. The hammer and trigger are still strongly case colored and their respective checkering and serrations remain sharp. The knurled end of the ejector rod has been purposely removed as part of the dart gun conversion. The cylinder release latch is as new. The screw heads are sharp although the strain screw shows some erosion. The markings are clear. Overall, this handgun rates in about Very Good Plus condition and would rate Excellent without the two areas of erosion.

Mechanics: The single and double actions function correctly. This is a Square Butt, K Frame which had a pinned barrel and retains the rebated chambers common to rimfire cylinders. There is an adjustable trigger stop. The barrel has eight ports visible in the chamber area. There is a gas pressure selection knob on the left side of the conversion unit. There is an obturating rotary locking breech block. The finned dart projectile is propelled by a .22 Ramset blank cartridge which is loaded normally in the cylinder. The cylinder holds six cartridges, but the barrel is loaded as a single shot. We did not fire this handgun.

Box, Paperwork & Accessories: A large blue two piece S&W box with blue metal reinforced corners is provided. This style box dates from 1957 to 1966 and pre-dates the Bangor Punta boxes. The end of the cover is marked “SMITH & WESSON / .22 MAGNUM / BLUE FINISH MODEL 53 / 8 3/8 – INCH BARREL”. The inside of the cover has the S&W Statement of Liability and Warranty information. The box is torn on the end not labeled and the top where the finger cutout starts. There is some rust on the metal corner reinforcements with fraying and finish loss at the sharp edges along with some handling and compression marks. The bottom half of the box shows some rust on the corner reinforcements and fraying on the unfinished edges. The finish has faded and there is one 1 ½” scratch on the bottom. The box rates in about Very Good condition. Four apparently complete used gray anodized training darts with orange fins are provided along with a fifth training dart without fins and having a damaged leading edge. One used gold anodized dye marker dart with white fins is provided along with a safety spring clip. The darts appear to be in Very Good to Fine condition, but we confess that these are the first darts of this kind we have ever seen.

Our Assessment: “The Standard Catalog of Smith & Wesson” 3rd edition by Nahas and Supica has a brief discussion of these guns on page 372: “MERCOX DART PROJECTILE GUN – Based on a K-22 frame, this handgun-type device could be used to deliver hypodermic dart syringes or such diverse materials as teargas, dye, or explosive or crowd control projectiles. Built in 1967 based on the three-screw Model 17 K-22 square butt frame with standard walnut grips and silver medallions. This model has a standard hammer and trigger. The similarity with the K-22 ends at the barrel; a 12 ½” dart barrel with an adapter is attached to the frame and uses a special .22 caliber cartridge as a propellant. Three were sold at auction in 1996: serial numbers K633730, K635515 and K637682. Very few made; possibly experimental only. Twenty-five manufactured by S&W for Mercox and reported that only 17 or 18 ever shipped.” Reprints of the four page catalog are easily available on-line and describe the different types of projectiles and their uses. This example has two areas of erosion that have pitted the metal: one on the cylinder and the other on the grip frame. The barrel appears to have been lightly scored. It has its original factory grips and is in at least Fine condition once the two eroded areas are excluded. This is a rare revolver, in addition to the three sold at auction mentioned above, we can only find two other examples that have been offered for sale. It is very possible you will not have another opportunity to bid on one of these, much less to own one.