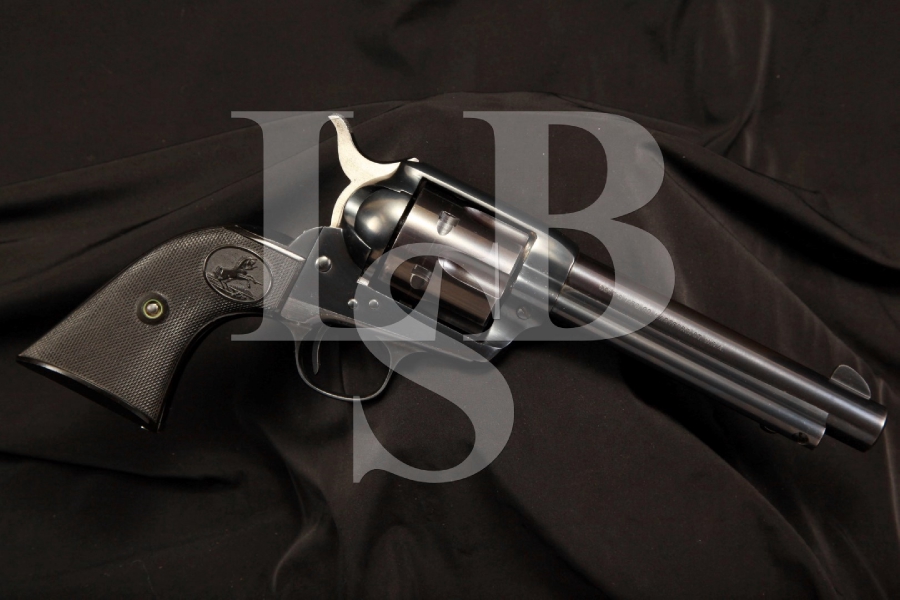 Markings: The left side of the barrel is marked “COLT SINGLE ACTION ARMY .38 SPECIAL”. The left side of the frame is marked “Pat. Sept.19,1871. / July 2,72. Jan.19,75.”, with the Rampant Colt logo and with a large Stembridge “S” above the trigger. The right side of the barrel (1st, 2nd and 3rd Gen. SAA’s are usually marked on the top of the barrel) is marked “COLT’S MFG.CO. HARTFORD, CT. U.S.A.” Colt changed their address in the late 1940s and this barrel stamping was used by Colt on barrels used to refurbish SAA revolvers in the 14 year period between the manufacture of 1st and 2nd Generation revolvers when the only replacement barrel offered was 5 ½” in length. The underside of the frame at the trigger guard is marked with a large “S” and both it and the trigger guard are marked “262149”. The front face of the cylinder is marked “P” and the rear face with a Rampant Colt logo. The bottom of the backstrap is marked “262 / 149”. The top rear of the loading gate is marked with an assembly number “2049”. The left front of the trigger guard is marked “5”.

Sights / Optics: This revolver is mounted with a “U” notch milled in the top strap for a rear sight and a quarter round blade front sight fixed to the barrel.

Stock Configuration & Condition: The grips are black checkered hard rubber with a Rampant Colt logo at the top of each grip. The left grip shows two small compression marks on its rear edge. The checkering shows light wear with no mars. The grips rate in about Excellent overall condition.

Finish Originality: The finish on the frame is not original. We think the barrel and cylinder on this revolver were both replaced, and that they still have their original finish.

Bore Condition: The bore is bright and the rifling is sharp. There is no erosion in the barrel.

Overall Condition: This revolver retains about 98% of its current metal finish. The front edge of the barrel shows thinning and there are a few light handling marks along the length of the barrel. There are tiny compression marks on the right side of the frame in front of the cylinder and on the left side of the trigger guard behind the trigger. The frame, trigger guard and backstrap show a very few tiny pits under the finish. The cylinder shows light handling marks, thinning on its edges, which are sharp, a spot of surface loss, a compression mark on the edge of one of the flutes and a very light drag line that doesn’t break the finish. The screw heads are sharp but two show light marks from a screwdriver. The markings on the barrel are extremely sharp while those on the frame are thin but readable. The revolver is in about Excellent condition as refinished.

Mechanics: The cylinder lockup is SOLID. The trigger pull is light and crisp. The action functions correctly. We have not fired this revolver.

Our Assessment: Stembridge was a company that rented guns to the movie industry. James Stembridge started working for Cecil B. DeMille as an action coach for actors and by 1920 was providing guns as movie props. Although they rented firearms to all the studios, Stembridge Gun Rental was housed in a warehouse on the Paramount lot until 1979, and by the 1980s had more than 10,000 guns in their armory. For more on Stembridge, please see http://www.ar15.com/forums/t_1_5/506928_Whatever_happened_to_Stembridge_Gun_Rentals_.html. This is a 109 year old Colt SAA made near the start of the changeover from blackpowder to smokeless powder frames. The barrel and cylinder have both been replaced on this revolver, probably in the early 1950s, as the barrel address is unusual (please see the Markings section). It is chambered in .38 Special. The frame, trigger guard and backstrap have been refinished in blue and the frame is marked in two places with the large Stembridge “S”. Our consigner bought the revolver at their auction when they went out of business. The pistol retains about 98% of its current finish, with thinning on the front edge of the barrel and on the cylinder and a small compression mark on the cylinder. This revolver probably has lots of stories if they could be told. Was it used by any famous actors? In what movies was it used? This should have some collector appeal, especially with the unique barrel marking on the right side instead of the top. If it goes unnoticed by the collectors, it is a great opportunity for a Cowboy Action shooter to get a great looking Colt with a sharp barrel, in Excellent mechanical condition with a Reel Western history