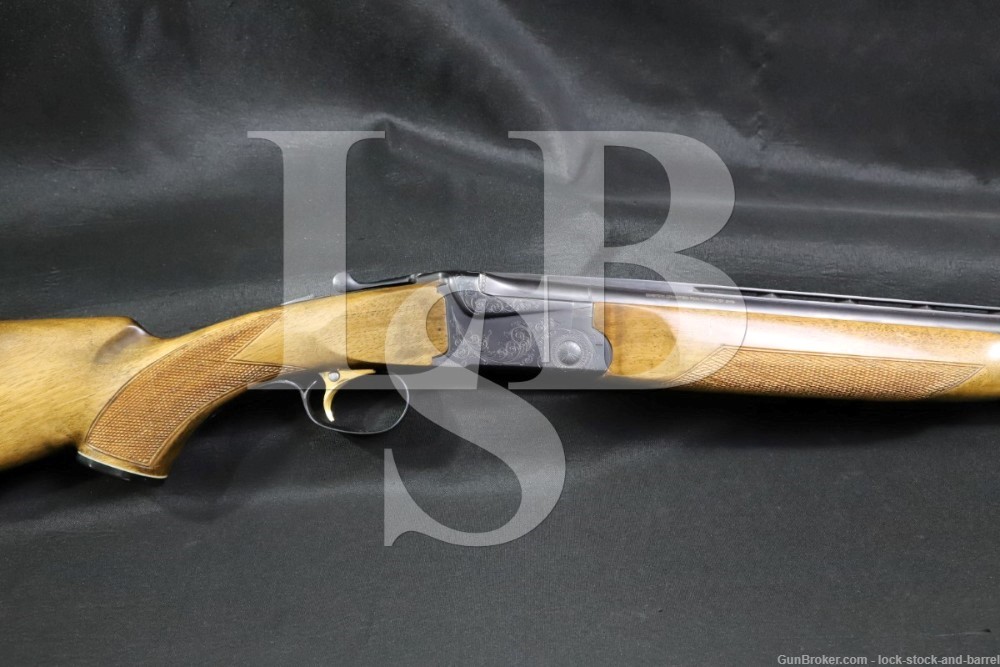 Markings: The left side of the top barrel is marked “MODEL 600 -20GA-2 3/4 CHAMBER- PROOF TESTED / ITHACA GUN CO., INC., ITHACA, N.Y. MADE IN JAPAN-ROTO FORGED”. The right side of the top barrel is marked “CUSTOM CRAFTED FOR ITHACA BY SKB”. The left and right sides of the bottom barrel’s chamber have factory marks. The bottom of the chamber is marked “2U”, “661459”, “7” and “NP”. The forend iron is marked “661459”. The forend’s hinge, receiver and trigger guard feature scroll engravings.  The bottom of the receiver features the serial number, “CM661459”.

Choke: The top & bottom barrels both have fixed Cylinder bores.

Sights/ Optics: The gun is mounted with a ventilated rib. The front sight is a white bead fixed to the rib by the muzzle. There is a small metallic bead half way down the rib. The rib is serrated to reduce glare.

Stock Configuration & Condition/ Grip: The stocks are two-piece wood featuring a checkered detachable forend, a checkered semi-pistol grip, a fluted straight comb, a brass medallion on the belly and the original brown rubber butt-pad. The stocks have some light handling marks, nicks and scuffs. Notably, there is a nick on the right side of the forend and a patch of stubborn fouling on the left side of the butt by the heel. Also, the brass medallion has some light handling marks and is discolored. The LOP is 14” from the trigger to the rear end of the butt-plate. The drops are approximately 1.5” at the comb and 2.5” at the heel. The butt-pad has some light handling marks and stubborn fouling. Overall, the stocks are in Fine condition.

Overall Condition: The shotgun retains about 95% of its metal finish. There are some scattered patches of light surface oxidation, light handling marks, nicks and scuffs. Notably, there is some light finish loss at the bottom of the receiver where it meets the forend and there is light finish loss around the muzzles. The markings remain clear. The screwheads have light tool-marks but they remain serviceable. Overall, the shotgun is in Very Good-Fine condition.

Mechanics: The action functions correctly. The barrels lock with no play. The shotgun has a single trigger with a barrel selector button. As with all previously owned firearms, a thorough cleaning may be necessary to meet your maintenance standards.

Our Assessment: This Ithaca Gun Co. imported SKB Model 600 is a 20 gauge side by side shotgun chambered for 2 3/4” shells. SKB is a Japanese firearms manufacturer which was founded by Shigyo Sakaba (SaKaBa or SKB) which began to export shotguns in the 1960s. SKB’s products were primarily imported by Ithaca until 1978 when the American company went bankrupt. SKB survived Ithaca’s troubles and still exports shotguns to the United States today. This shotgun was manufactured sometime between 1968-1978 when Ithaca was importing SKB’s products. The shotgun has some light handling wear but it is still beautifully crafted with scroll engraving and the gun remains mechanically sound. You do not want to miss out on this shotgun!