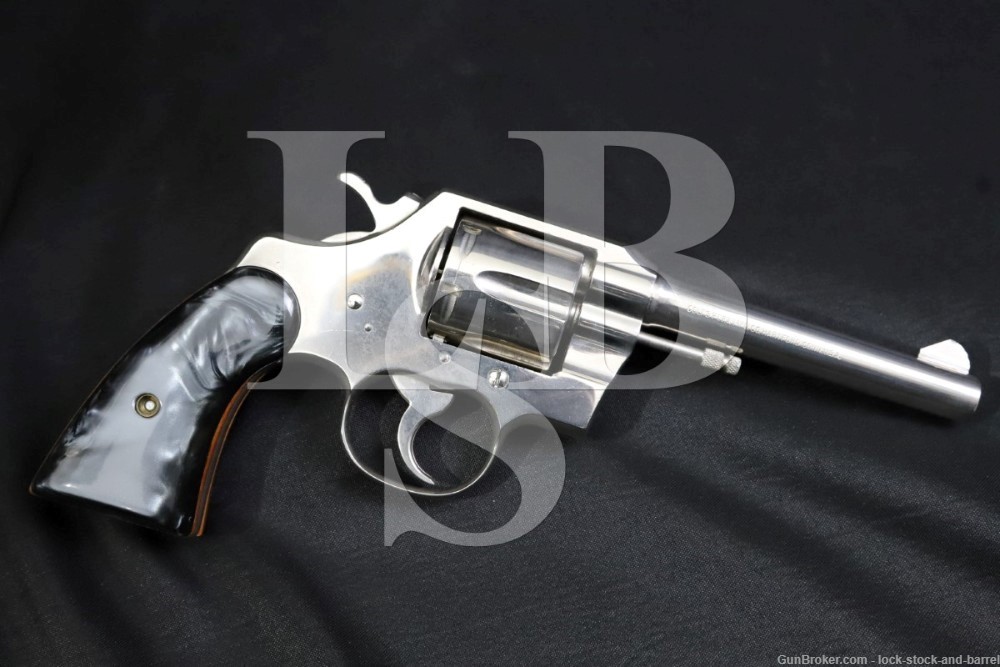 Model: Official Police, in service with the Detroit Police

Sights/Optics: The front sight is a serrated ramped blade fixed to the barrel. The rear sight is a square notch integral to the rear of the top strap.

Stock Configuration and Condition: The grips are replacement two-piece faux black ivory panels with wood plates. There are minor nicks scattered about. Overall, the grips rate in Fine condition, as not original to the gun.

Type of Finish: Nickel (The left side of the grip frame under the panel is marked “N” for nickel.)

Bore Condition: The bore is rather bright and the rifling is well-defined. There is no erosion in the bore, but minor stubborn fouling can be seen at the throat and at the muzzle.

Overall Condition: This revolver retains about 96% of its nickel finish. There are a few areas where the nickel is a bit diffuse, mainly at edges and where. There are minor nicks and scuffs scattered about, most notable on the frame and grip frame. More notable nicks that go into the metal a bit can be seen on either side of the barrel. Screws have minor tool marks with strong slots, and pins are not peened. All markings are clear. Overall, this revolver rates in Fine-to-Excellent condition.

Mechanics: The action functions properly. The single action is crisp, the double action is smooth. The cylinder locks up with no play when the trigger is depressed. We did not fire this revolver. As with all used firearms, thorough cleaning may be necessary to meet your maintenance requirements.

Our Assessment: The Colt Army Special was introduced with the Army in mind, and quickly came to be noted for its accuracy, winning the National Revolver Match in 1911 and establishing a new range record at Camp Perry the same year. Unfortunately, Colt was never able to interest the Army in a medium framed revolver, and changed its name to the “Official Police” in 1928 after they found that the New York Police Department, among others, were willing to adopt the revolver. The Colt Official Police is a medium frame, six-shot, double-action revolver with a six-round cylinder, primarily chambered for the .38 Special cartridge, and manufactured by the Colt Manufacturing Company. The intended target market for the Official Police was law enforcement and it became one of the best selling police firearms of all time, epitomizing typical perception of a police sidearm. This Official Police was produced in 1961 and has a 4″ barrel and a nickel finish. It saw service with the Detroit Police department, and considering that, it shows signs of considerate use, truly a beauty. Good luck and happy bidding!