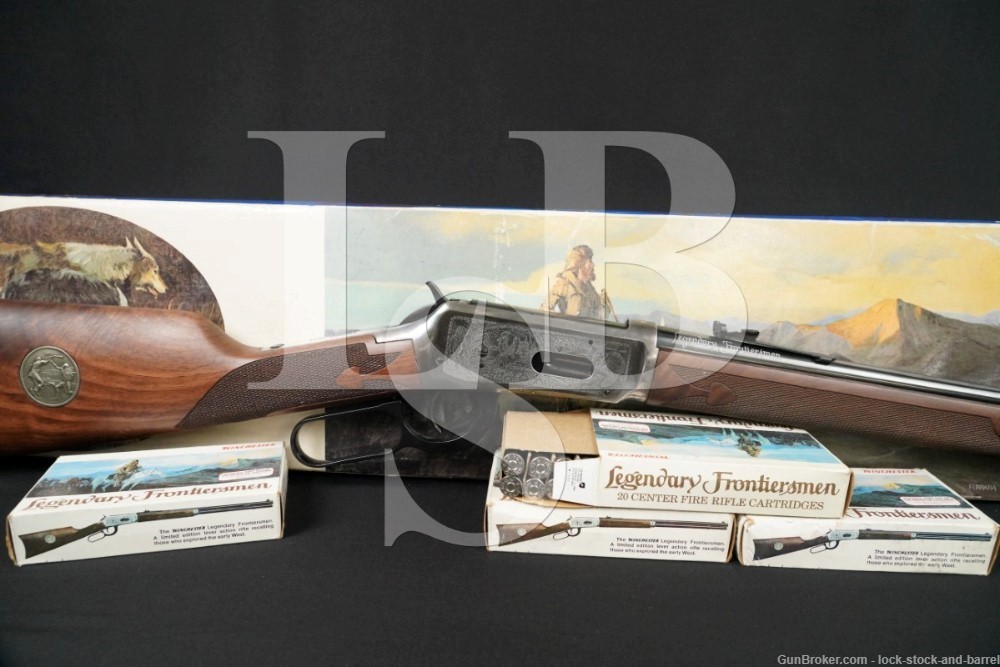 Stock Configuration & Condition: The stocks are two-piece checkered wood with a capped forend, straight grip, straight comb, and a blued steel buttplate. There is a medallion on the right side of the buttstock depicting an Indian and frontiersman in battle. The wood shows a couple white scuffs on either side and there is a small cluster of little nicks and scratches on the right near the belly. There is minor discoloration in the grip checkering on either side. The checkering is sharp. The LOP measures 13 1/2″ from the front of the trigger to the back of the buttplate. The plate has faint wear. Overall, the stocks are in about Fine-Plus condition.

Overall Condition: This rifle retains about 96% of its metal finish. The metal shows light storage and handling marks. There is tarnish throughout the receiver and on the nose cap, it is most notable on the lower metal of the receiver. The left side of the receiver and the assembly plate have a few stains. There are some sparsely scattered faint lines on the magazine tube and barrel. The action shows light operational wear. The screw heads are sharp. The markings are clear. Overall, this rifle is in about Fine condition.

Mechanics: The action functions correctly. The rifle has a half-cock safety and a lever safety. We have not fired this rifle. As with all used firearms, a thorough cleaning may be necessary to meet your maintenance standards.

Our Assessment: In 1979, Winchester produced 19,999 Model 94 Legendary Frontiersman rifles in their New Haven, Connecticut, USA factory. The serial numbers ran consecutively from LF1 to LF19999. These post-1964 Model 94 actions were the later type with good steel receivers and improved shell elevators and loading gates. They pre-date the introduction of the Model 94 AE (angle eject for scope mounting, which became standard in 1984), but the top eject receiver is drilled and tapped for mounting receiver (peep) sights. The Legendary Frontiersmen, fortunately, also predates the introduction of the receiver mounted cross-bolt safety mandated by lawyers that appeared in 1992. This rifle is in about Fine condition and has a bright bore and strong mechanics. This would make a terrific addition to your Winchester collection. Please see our photos and good luck!