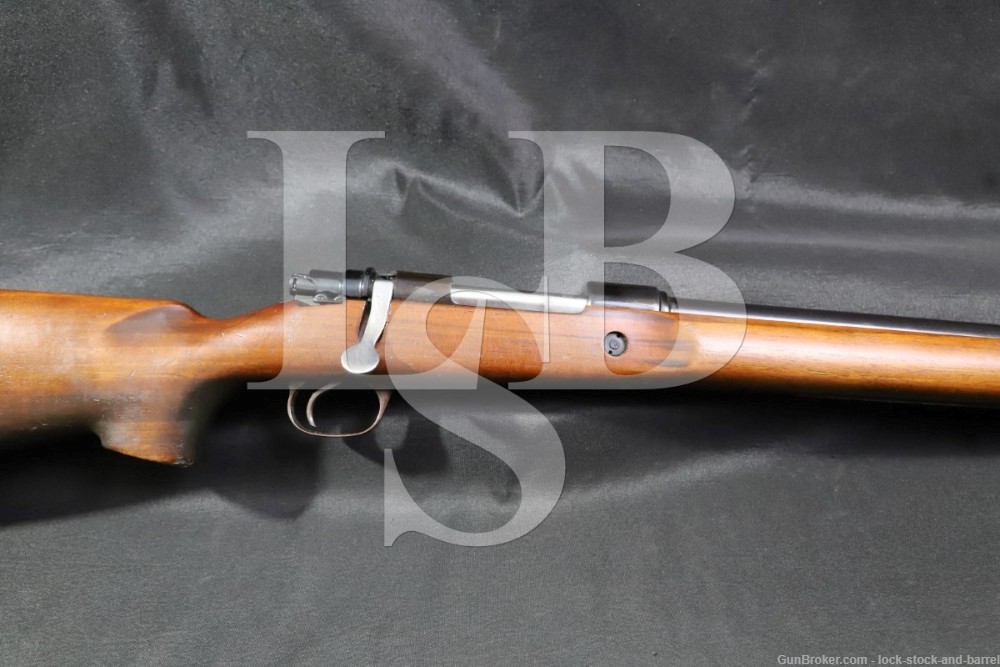 Stock Configuration & Condition/ Grip: The stock is one-piece wood featuring a forend with an adjustable sling stud at the bottom, a through bolt, a takedown screw, a semi-pistol grip, a fluted straight comb and brown rubber Kel-Tec recoil-pad. The stock has scattered light-moderate handling marks, nicks and scuffs. Notably, there is a ding on the left side of the forend just ahead of the through bolt, a nick at the top of the grip, a scuff at the comb and some scattered light nicks and handling marks. There are no chips or cracks. The LOP is 12.5” from the trigger to the rear end of the recoil pad. The recoil pad has heavy handling marks. Overall, the stock is in Very Good condition.

Overall Condition: The rifle retains about 90% of its metal finish. There are some light handling marks, nicks and scuffs. Notably, the top of the chamber has some handling marks from accessories that were previously installed (there are no accessories included with the rifle), there are two nicks on the right side of the barrel and a tiny nick at the bottom of the barrel which is just behind the muzzle. The markings remain clear. The screwheads are unmarred and serviceable. Overall, the rifle is in Very Good condition.

Mechanics: The action functions correctly. We did not fire this rifle. As with all previously owned guns, a thorough cleaning may be necessary to meet your maintenance standards.

Our Assessment: This is a Parker Hale manufactured 1200X bolt-action target rifle chambered for 7.62 NATO cartridges. The rifle was manufactured by Parker Hale which was a Birmingham based British arms manufacturer that was founded in 1910 and remained in business until 1992. The Model 1200X is the civilian variant of the Parker Hale Model 82 which was adopted by several nations security forces as a sniper rifle. The 1200 was intended for use as a target rifle and is technically an impressive gun. This rifle’s front and rear sights have been removed, but this is not entirely a bad thing as new ones can be installed that suit your fancy. This rifle has some handling wear, but it remains a nicely crafted option. It should prove a worthy addition to your collection. Good luck on your bid!