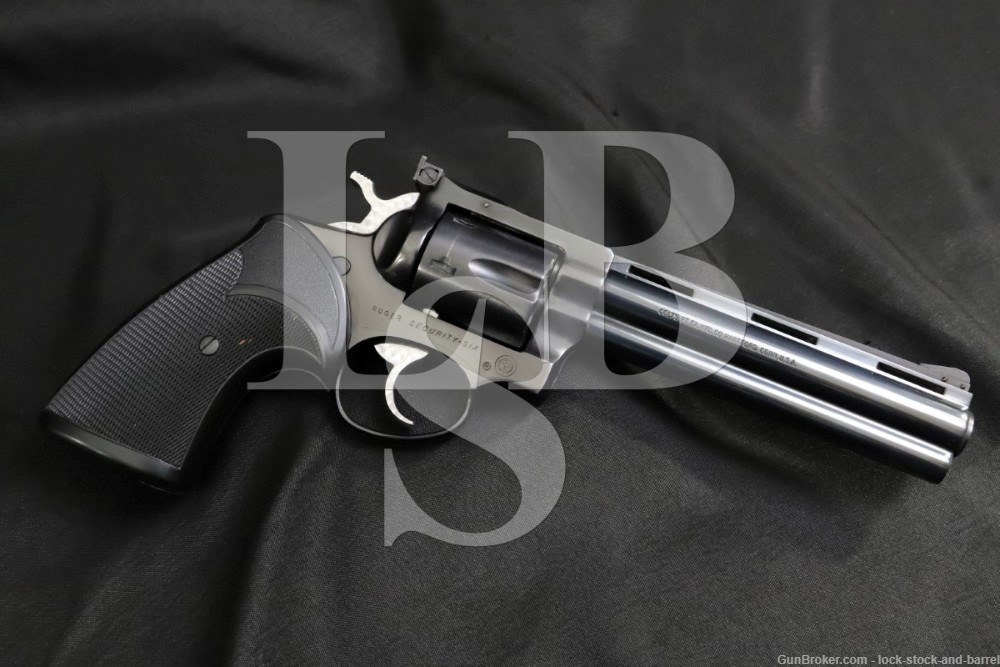 Stock Configuration and Condition: The grip is a one-piece checkered black-rubber wraparound Pachmayr Presentation grip. There are a few minor handling marks and the rubber is cracking slightly at the heel. The checkering is sharp. There are no rips or tears. Overall, the grip is in Fine-plus condition, as not original to the gun.

Type of Finish: Blued with Machine Jeweled Trigger and Hammer

Bore Condition: The bore is mostly bright and the rifling is sharp. There is no erosion, but minor stubborn fouling persists throughout.

Overall Condition: This revolver retains about 98% of its metal finish. On either side of the barrel you will find very minor nicks running backward, tell-tale holster and draw wear. The cylinder has a distinct turn line. Pins and controls are undamaged, the grip screw is sharp, and all markings are clear. Overall, this revolver is in Fine-to-Excellent condition.

Mechanics: The action functions correctly. The cylinder locks with very minor play when the trigger is depressed. The double-action is light and breaks cleanly; the single action is feather-light. We did not fire this revolver. As with all used firearms, thorough cleaning may be necessary to meet your maintenance standards.

Our Assessment: In 1955, the United States launched the first nuclear-powered submarine, West Germany joined NATO, the first cans of Coca-Cola were sold, and Colt began shipping the finest precision combat and target revolver ever made. In 1971, the Security-Six came about when Ruger made a run at the law enforcement market. Ruger revolvers were certainly popular with the civilian market, but what firearms manufacturer worth their powder wouldn’t want to get into the wallets of taxpayer funded organizations? An individual will purchase a revolver; the area PD will buy many. Both revolvers in their own way were incredibly popular, and both are enduring firearms—though the Python has an allure and collectibility that the Security-Six does not. Ruger has trudged along, weathering all seasons rather well, and while Colt stopped producing the Python for financial reasons, Ruger often discontinues a gun due to their ceaseless innovation and vertically integrated production capability—they just… move on. Firearms customization was very popular among law-enforcement in the late 70s and 1980s, and for many officers, a Python was beyond their means. A Security-Six, however, was easily attainable. Enter the late Bill Davis, a former police officer and gunsmith (the work done on this revolver is in line with his methods, but other smiths did create these customs as well). He would order barrels from Colt and take a Security-Six supplied by a customer and make what is sometimes referred to as a “Frankencolt”, “Cougar”, or “PPC” revolver. The sturdy and reliable Ruger mated with a Colt made for a firearm with better weight distribution and a twist rate that shooter’s found more satisfactory. Plus, they look really cool. With the advent of the Smith & Wesson 686, the customization market saw its end—the 686 was a factory gun that met the needs of most shooters that would go out of their way to customize a revolver. From what we can tell, these are exceedingly rare, and the most notable man who made them is no longer with us. This example is chambered for the powerful .357 Magnum and has very little wear. Good luck and happy bidding!