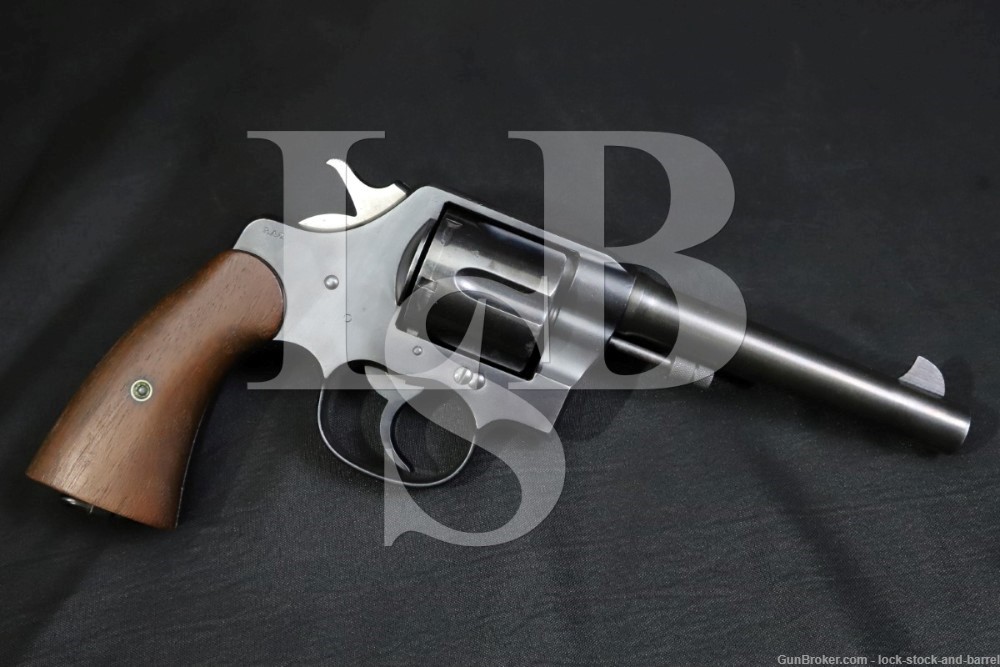 Sights/Optics: The front sight is a tall shark’s fin style blade. The rear sight is a “U” shaped groove in the top of the receiver.

Stock Configuration and Condition: The grips are two-piece smooth wood. Both grip panels have a few very minor nicks on the lower edges. There are chips or cracks. Overall, the grips are in Fine-plus condition.

Bore Condition: The bore is rather bright with well-defined rifling. There is no erosion, but minor stubborn fouling persists intermittently down the grooves.

Overall Condition: This revolver retains about 95% of its current metal finish. The frame has scattered spots of surface erosion under the finish—this is most notable on the top strap. There is minor thinning on most edges. The barrel has a few minor nicks scattered about. The back strap has intermittent nicks. The screws range from sharp to lightly tool marked, all have strong slots. Markings are clear. Overall, this revolver is in Very Good-to-Fine condition, as refinished.

Mechanics: The action functions correctly. The cylinder lockup has no play whatsoever with the trigger depressed on all chambers. The single action trigger pull is light and the double action is smooth, if a bit heavy. We did not fire this revolver. As with all used firearms, thorough cleaning may be necessary to meet your maintenance standards.

Our Assessment: Colt came out with their large framed double action New Service revolver in 1898. The Army was looking for a large caliber double action pistol to replace their .38 caliber S&W and Colt pistols that had proved to have inadequate stopping power during the Philippine-American war, and adopted the New Service revolver chambered in .45 Colt in 1909. In Europe, Britain was in the process of changing over from the Webley Mk IV to the Mk V when WWI broke out, forcing them to buy substitute weapons from neutral countries. Smith & Wesson provided their 2nd Model Hand Ejector and Colt their New Service revolvers. This is a M1909 Colt New Service made in 1911, and is dotted with R.A.C. stamps for inspector Rinaldo A. Carr. This example is in Very Good-to-Fine condition thanks to a previous refinishing. Good luck and happy bidding!