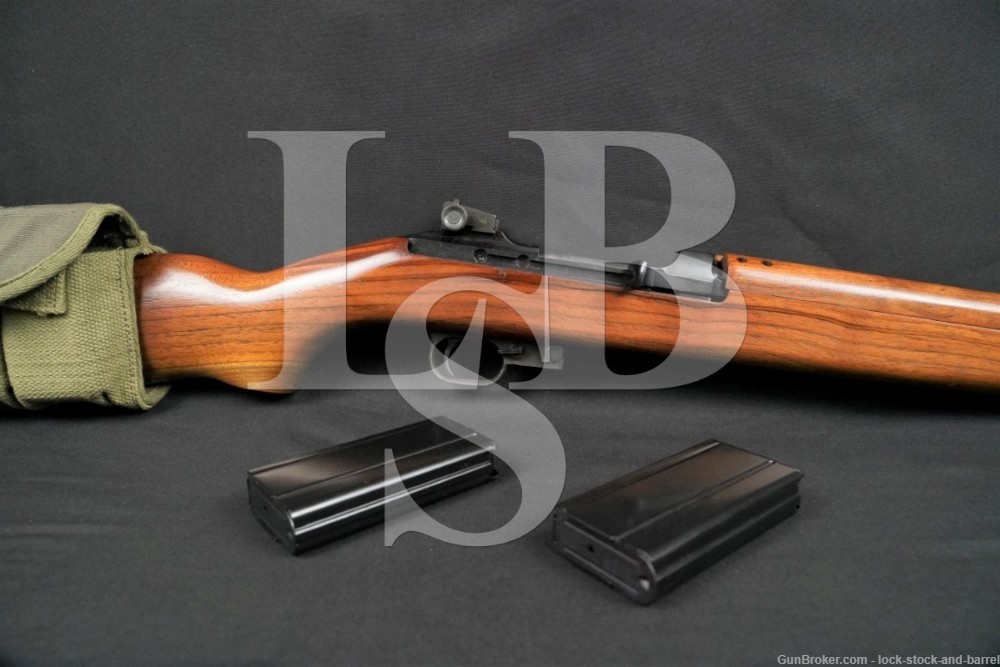 Sights / Optics: The front sight is a post set between 2 protective wings. The rear sight is a USGI Type II adjustable aperture.

Stock Configuration & Condition: The wood stock has a pistol grip, USGI Type III barrel band with sling loop & bayonet lug, sling well, sling pass through, and a metal buttplate. The wood shows scattered light scrapes & scratches. The LOP measures 13 3/8 inches from the front of the trigger to the back of the buttplate. The stock rates in about Fine overall condition.

Bore Condition: The bore is semi bright. The rifling is sharp. There is fouling in the grooves which should clean up some. There is no erosion. The bore shows an M.E. of 1.7.

Overall Condition: This rifle retains about 95% of its metal finish.
There is a spot of surface erosion under the barrel band. This area also shows scratches. The barrel band shows a scratch. The front of the barrel shows light thinning. The receiver and bolt show light operational wear. The metal shows other scattered light scrapes and small scratches. The markings are deep. Overall, this rifle rates in about Very Good Plus to Fine condition.

Box, Paperwork & Accessories: The rifle comes with 2 USGI 15 round magazines that show light scrapes & thin light scratches. They are in Fine condition.
The rifle comes with a reproduction dual mag pouch. It shows light wear and is in Very Good Plus to Fine condition.
The 15 round magazines are not available to residents of California or any other state with magazine capacity restrictions.

Our Assessment:  Universal Firearms produced M1 Carbines in different variations from 1957 to 1987. This early Universal M1 Carbine was made in Hialeah, Florida sometime between 1962 and 1964. It was made with several USGI parts and is compatible with many other USGI parts. Later dated Universal M1 Carbines were made using mostly Universal parts that do not interchange with USGI parts. The rifle looks great for its age and has a strong bore. The rifle comes with two 15 round magazines and a reproduction dual magazine pouch. Good luck.