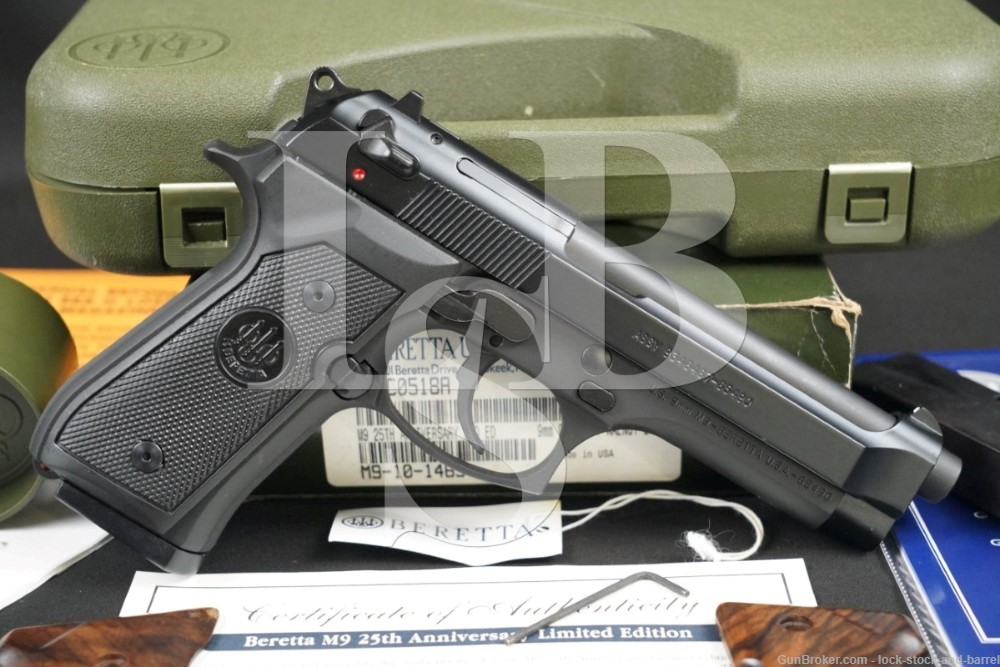 Stock Configuration & Condition/ Grip: The grip panels are two piece checkered black synthetic, the original walnut commemorative grips are not included. There is a lanyard ring fixed to the butt-strap. They have some light handling marks but they lack any notable defects. There are no chips or cracks. Overall, the grip panels are in Fine condition.

Overall Condition: The pistol retains about 95% of its metal finish. There are some light handling marks including some standard handling wear on the top of the barrel. Otherwise, the pistol lacks any notable defects. The markings remain clear. The screw slots are unmarred and serviceable. Overall, the pistol is in Fine-Excellent condition.

Mechanics: The action functions correctly. The single-action trigger is crisp and the double-action is smooth. The slide to frame fit is snug. We did not fire this pistol. As with all previously owned firearms, a thorough cleaning may be necessary to meet your maintenance standards.

Box Paperwork and Accessories: The pistol comes with its serial matched box, olive drab colored box,  a certificate of authenticity from Beretta, a user manual, some miscellaneous paperwork and a total of two 15 round magazines. The magazines have standard handling marks and remain in Fine condition. Please note, no magazines will be included for purchasers who reside where they cannot be legally transferred.

Our Assessment: This Beretta M9 25th Anniversary Limited Edition pistol was manufactured in 2010 and is number 1,463 of 2,010 made in total. The Beretta M9, the US military designation for the 92FS, is a single and double-action semi-automatic pistol chambered 9mm Luger rounds. The gun was originally adopted for service throughout the US Armed Forces in 1985 and had remained in service until the present. The gun has seen service in well over 100 operations and has a record of operational excellence. This gun was released to celebrate the 25th anniversary of Beretta’s association with the US military and it is indeed an impressive commemoration. The mechanically sound handgun has a solid utilitarian finish. Unfortunately, the commemorative grip panels are not included with the pistol, but otherwise it remains in its original configuration. The gun is a nice commemorative piece, plus it remains an extremely well designed handgun that should prove useful in a variety of scenarios. It should also be noted that Beretta is currently the oldest manufacturer of firearm components in the world, the company manufactured arquebus barrels which were supplied to the Venetian fleet that defeated the Ottomans during the Battle of Lepanto in 1571. The company remains one of the most prestigious firearms manufacturers in the world, and this pistol is an example of the quality firearms the company is renowned for. This is one Beretta you do not want to miss out on!