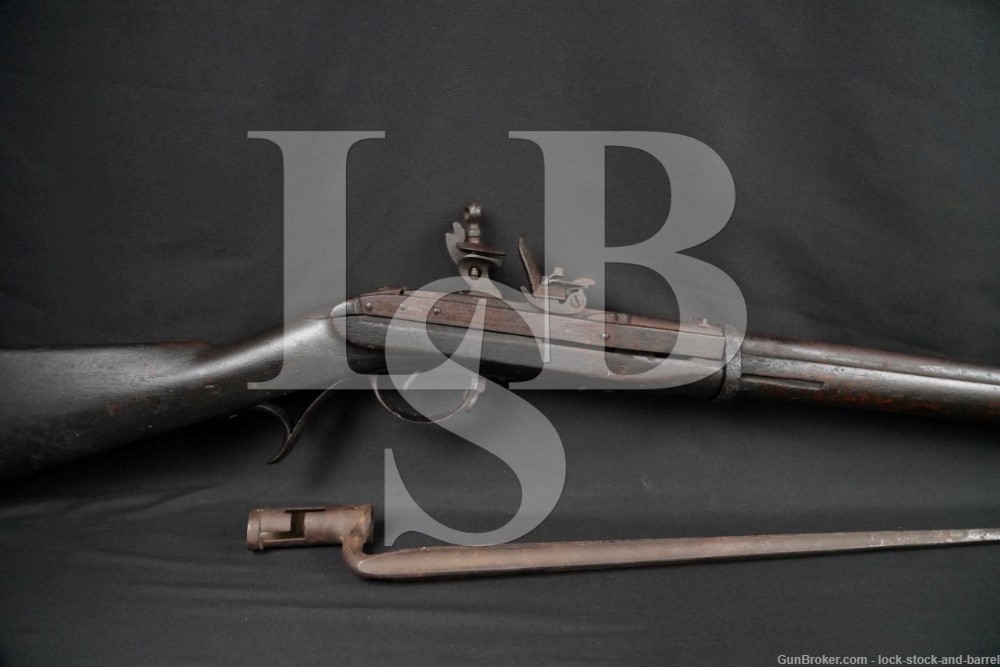 Sights/ Optics: The rear sight is a “V”-notch dovetailed to the barrel. There is no front sight installed but there is a dovetail slot for a front sight by the muzzle that remains serviceable. Please note, the sights were designed to be off center by about 30 degrees to the left of the vertical axis of the barrel, this is not a defect.

Stock Configuration & Condition/ Grip: The stock is one-piece smooth wood. There are three barrel bands, the front two barrel bands are secured by springs while the rear barrel band is coated in erosion and its spring is missing. There is a slot for the included ramrod but it does not seat properly in the stock. The stock also features a straight wrist with finger grooves integral to the bottom tang, a straight comb and metal butt-plate. The stock has moderate handling marks, nicks, scuffs and compressions. Notably, on the left side of the forend there is a crack that originates slightly behind the middle barrel band and extends towards the front of its spring, there is another light crack on the left side of the forend that originates where the rear barrel band is seated and extends slightly forward, there is a crack at the bottom of the forend which extends from the chamber release latch assembly to the rear barrel band, there is a small crack which originates at the rear end of the chamber release latch assembly and there is a large crack which extends from left to right across the top of the wrist. Also, there are several light cracks that originate at the butt-plate and extend onto both sides of the butt, there is a patch of heavy wear just ahead of the rear barrel band and a small ding just behind the front barrel band. Finally there is scattered black colored build-up throughout the stock. The LOP is 14.5” from the trigger to the rear end of the butt-plate. The butt-plate has moderate handling marks and is coated in erosion. Overall, the stock is in Good condition for an Antique.

Bore Condition: The bore is semi-bright with sharp rifling. There is scattered erosion in the bore. Please note, we were unable to get the ramrod all the way down to the chamber and there appears to be something in the chamber, unfortunately the chamber can not be opened to inspect further.

Overall Condition: The rifle has no surviving metal finish. The rifle is coated in moderate oxidation and patches of erosion which have given it a patina color. The rifle has moderate handling marks, nicks and scuffs. Notably, there is a black colored item which has been jammed in-between the chamber and rear end of the receiver which prevents the chamber from opening. Also, there is a patch of light scratches ahead of the rear barrel band, some scattered patches of white discoloration around the top of the muzzle and barrel ahead of the front barrel band and some white discoloration on the front barrel band. The marking remains clear. The screwheads have light to moderate tool-marks, the two screwheads on the butt-plate have oxidation build-up in their slots but the rest remain serviceable. Overall, the rifle is in Poor condition for an Antique.

Mechanics: There is a black colored item which has been jammed in-between the chamber and rear end of the receiver which prevents the chamber from opening. The hammer can not be properly cocked, likely because the mainspring is damaged. We have not fired this rifle. As with all previously owned firearms, a thorough cleaning may be necessary to meet your maintenance standards.

Box Paperwork and Accessories: The rifle comes with a socket bayonet which was specifically configured for the Model 1819 rifle. The socket bayonet is marked “US” on the ricasso. The bayonet is coated in moderate oxidation and has taken a patina color. Overall, the bayonet is in Good condition for an Antique.

The M1819 Hall Rifle was designed by John Hancock Hall in 1811 and it is one of the first breech-loaded rifles to be adopted in large numbers by a national military. The rifle’s design was accepted for service in the U.S. Army in 1819 following several trials. Production was primarily carried out at Harpers Ferry Arsenal and by Simeon North, a Connecticut based arms manufacturer. One of the most revolutionary aspects of the rifle was that it was the first firearm ever successfully manufactured with completely interchangeable parts (Reily, Robert M., United States Martial Flintlocks: A Comprehensive Illustrated History of the Flintlock in America From the Revolution to the Demise of the System. (Lincoln, Andrew Mowbray Inc., 1997) P. 138). It was not the first breech loaded rifle, it was preceded by the British Ferguson Rifle which saw limited service during the American Revolutionary War. Although the Ferguson was used by British forces in the late 18th century, only a very small number were manufactured. On the other hand, the Hall Rifle was mass produced with well over 20,000 rifles made and around 27,000 carbine variants manufactured between both Harpers Ferry and Simeon North. Many Hall Rifles were eventually converted to the percussion ignition system. The Halls Rifle saw use in a number of conflicts, but the simplicity and lower costs associated with conventional muzzleloaders left it underappreciated when it was in service. Despite this, the breech-loaded design would go on to influence the Sharps and Spencer designs that came to prominence during the Civil War.

This particular Hall Rifle is no longer mechanically functional but it remains an impressive Antique. Its legacy is indisputable as one of the first breech loaded rifles and the first firearm to be made with fully interchangeable parts. It is a testament to American ingenuity and an important piece in the evolution of firearms from muzzle-loaded cap & ball muskets to modern breech-loaded rifles. Good luck on your bid!