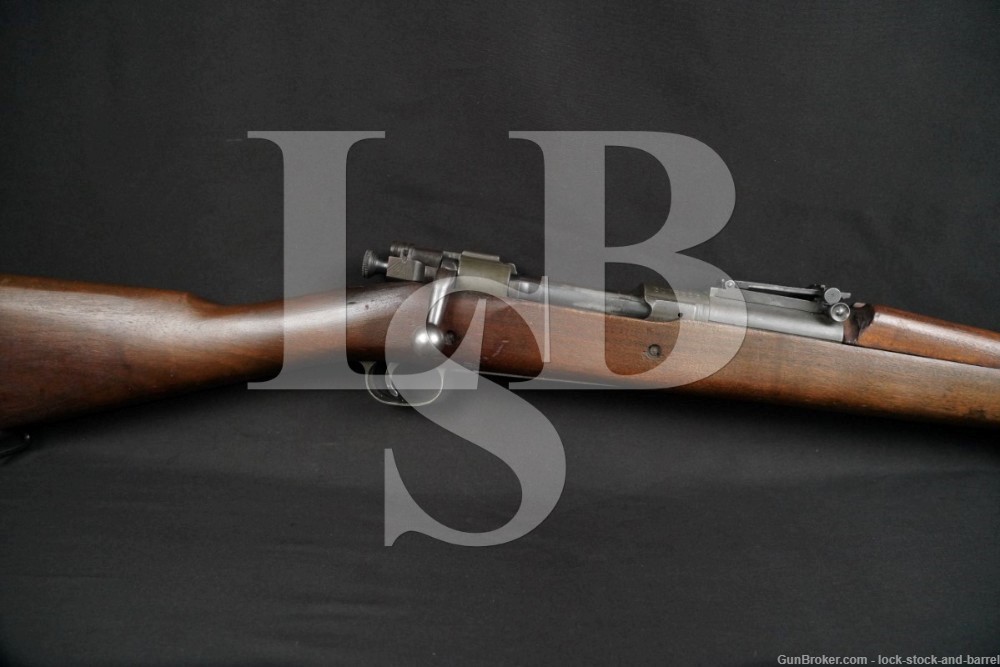 Markings: The top of the receiver ring is marked “U.S. / REMINGTON / MODEL 1903 / 3075953”. The top of the barrel, just behind the front sight, is marked “R A” (Remington Arms) above a flaming bomb that has a punch prick proof mark whcih indicates the barrel is proofed (Ordnance Department marking) and features the date of manufcature “1 42” (January of 1942). The bottom of the barrel is marked “P”. The bolt sleeve is marked with a “R” which is a Remington proof and “8” inside a circle. The bottom of the bolt handle is marked with what appears to be a “T”.  The portion of the forend, just ahead of the magazine’s front tang, is marked “4” inside a triangle, “6” inside a box, “8” inside a diamond and “7” inside a circle which are inspection markings. The forend is marked “P” inside a circle just behind the trigger guard. The left side of the forend is marked “FJA” inside a box which was the inspection marking for Frank J. Atwood adjacent to the Ordnance Department’s escutcheon (a pair of crossed cannons). The heel is marked “0 / 6 / 6”. The left side of the butt was marked “103” in white paint. The rear sight’s base, ladder and slider are all marked “R”.

Stock Configuration & Condition/ Grip: The stocks are two piece smooth wood featuring a hand guard, a metal nose cap with an integral bayonet lug and attachment for a sling swivel (no sling swivel is installed on the nose cap), a single barrel band with a fixed sling swivel which is secured by a spring, two through bolts located beneath the receiver, a straight wrist, a straight comb, a sling swivel fixed to the belly and a metal buttplate which has a storage compartment. There are some light-moderate handling marks, nicks and scuffs on the stocks. Notably, there is a patch of moderate-heavy wear on the left side of the magazine’s base and some nicks on the right side. Also, there is some wood filler which has been applied to the right side of the forend, just behind the barrel band. Finally, the nose cap has some light play because the screw-slot that holds it in place has some moderate wear. There are no chips or cracks. The LOP is approximately 13” from the trigger to the rear end of the butt-plate. The butt-plate has some light finish loss around its leading edges and some scattered light surface oxidation. Overall, the stocks are in Good condition.

Bore Condition: The bore is mostly bright with sharp rifling. There is some light erosion concentrated in the grooves. Our gauge gives us an ME of approximately 1.

Overall Condition: The rifle retains about 75% of its metal finish. There are some light handling marks, nicks and scuffs. Notably, there is finish loss around the leading edges, scattered finish loss around the muzzle and front sight and scattered patches of finish loss on the bolt. There is some scattered light erosion including a notable patch on the right side of the barrel near the muzzle and front sight. The markings remain clear. The screwheads have light tool marks and remain serviceable. Overall, the rifle is in Very Good condition.

Our Assessment: This is a Remington manufactured Modified M1903 which is a bolt-action rifle with fixed magazine that is chambered for .30-06 Springfield cartridges.

Following the Japanese attack on Pearl Harbor on December 7th, 1941 the United States was dragged into the Second World War (WWII). Germany and Italy declared war on the United States to support Japan (and it was no secret that the U.S. was supplying critical war material to England since the war in Europe began in 1939). The Roosevelt administration was quick to institute a war economy, and virtually every business was pressed into government service. Firearms production was naturally taken up by America’s prestigious gun manufacturers, and Remington was no exception. Remington was already manufacturing M1903 rifles for the US military before America had entered the war. It was originally selected to manufacture the M1903 rifle in September of 1941, only a few months before the attack on Pearl Harbor. Remington used equipment taken from Rock Island Armory to manufacture its M1903s and these early examples were nearly identical to Rock Island’s WWI production M1903 rifles. Later, Remington slowly began to modify their M1903s and these changes appear to have been instituted after the United States entered WWII in order to cut costs. The government ultimately introduced several changes to the rifle and Remington was instructed to discontinue the M1903 altogether for the M1903A3 variant of the rifle in late February of 1942. By the end of the war, Remington had impressively manufactured 348,085 M1903s and 700,000 M1903A3 bolt-action rifles, well over a million units in total!

This particular Remington M1903 is one of the “modified” rifles that was made just before the M1903A3 was introduced. Unlike WWI rifles, these examples are easily distinguished by the lack of finger grooves on the forend. Aside from the markings on the bolt, the rest of the markings on the barrel, receiver and stocks remain clear. Mechanically this rifle is sound and should prove a worthy companion to its next owner. This is a very well crafted WWII-era bolt-action rifle that you do not want to miss out on!