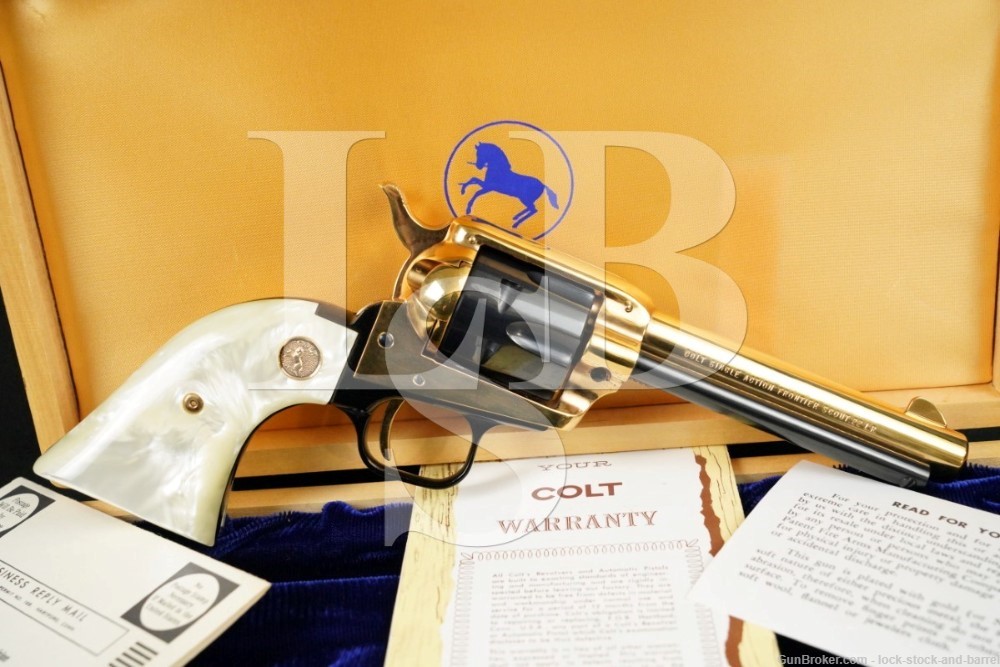 Action Type: Single-Action Revolver with a 6-Round Side-Loaded Cylinder

Sights/ Optics: The front sight is a blade fixed by the muzzle. The rear sight is square-notch integral to the top-strap.

Overall Condition: The pistol retains about 98% of its metal finish. There are some very light handling and storage marks, but the pistol lacks any notable defects. The markings remain clear. The screwheads are unmarred and serviceable. Overall, the pistol is in Excellent condition.

Mechanics: The action functions correctly. The cylinder locks with barely perceptible play on each chamber. The single-action trigger is crisp. The hammer has four clicks (the quarter notch (which serves as the safety), half-cock, when the cylinder lock lug engages the cylinder and the fully-cocked trigger). We did not fire this revolver. As with all previously owned firearms, a thorough cleaning may be necessary to meet your maintenance standards.

Box Paperwork and Accessories: The revolver comes with its display case that features a medallion on the top of the lid which celebrates the Nebraska centennial in the center of an outline shaped like the State which is adjacent to a Colt logo, the inside portion of the lid is cushioned with a Rampant Colt logo on the padding and the inside of the case features a tray with a blue velvet cover for displaying the gun. The case has some light handling marks, but it remains in Fine-Excellent condition.  There is also a user manual and some miscellaneous paperwork included with the revolver.

Our Assessment: This Colt manufactured Nebraska Centennial Frontier Scout is a single-action revolver chambered for .22 LR rounds. The territory that would become Nebraska was sparsely populated, primarily by various American Indian tribes, until the mid 19th century when the Homestead Act spurred a massive influx of settlers from the United States. The migration further accelerated after the Civil War ended, and by 1867, only two years after the war, enough settlers had arrived to allow Nebraska to apply for statehood. Finally, on March 1st, 1867 Nebraska became the 37th state to join the union. The capital was moved from Omaha to Lancaster, which was renamed Lincoln in honor of the then recently assassinated President. Nebraska has been a vibrant part of the United States ever since. This revolver is beautifully finished and mechanically sound, a perfect item to commemorate Nebraska’s centennial anniversary. Good luck on your bid!