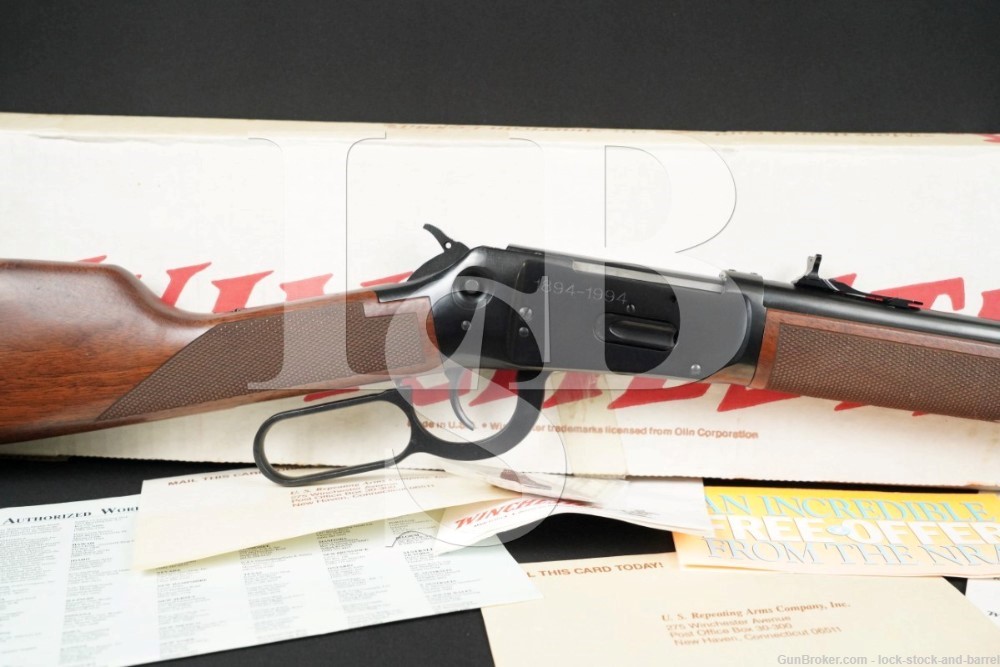 Stock Configuration & Condition: The stocks are two-piece checkered wood with a banded forearm, straight grip, straight comb, and an orange Winchester buttpad. The wood is clean with no notable wear or damage. There are no chips or cracks. The checkering is sharp. The LOP measures 13 3/4” from the front of the trigger to the rear of the buttpad, which shows wear and light discoloration. Overall, the stocks rate in about Excellent condition.

Bore Condition: The bore is bright and the rifling sharp. There is no erosion in the bore, just a few minor spots of light fouling.

Overall Condition: This rifle retains about 99% of its metal finish. The metal is clean with no significant wear or damage. The screw heads are sharp. The markings are crisp. Overall, this rifle is in about Excellent condition.

Mechanics: The action functions correctly and smoothly. The lever safety is present and functions properly. The receiver also contains a push safety that blocks the hammer from hitting the pin. The hammer has a half cock safety position. We have not fired this rifle. As with all used firearms, a thorough cleaning may be necessary to meet your maintenance standards.

Box, Paperwork & Accessories: This rifle comes in its original serial matching box with paperwork including a manual and a hammer spur. The box shows scattered light wear and minor discoloration. The hammer spur shows oxidation.

Our Assessment: The 1894 was produced by the Winchester Repeating Arms Company through 1980 and then by U.S. Repeating Arms under the Winchester brand until they ceased manufacturing rifles in 2006. Reproductions are being made by the Miroku company of Japan and imported into the United States by the Browning Arms company of Morgan, Utah. The Model 1894 has been referred to as the “ultimate lever-action design”. The Model 1894 is the rifle credited with the name “Winchester” being used to refer to all rifles of this type and was the first commercial sporting rifle to sell over 7,000,000 units. This Winchester Model 94AE  Centennial Edition was made in 1994 to celebrate the 100th year production of the Winchester 1894 Rifle. It features beautiful checkered walnut stocks with a straight grip and is chambered for 307 Winchester.The .307 Winchester cartridge was introduced by Winchester in 1982 to meet the demand of .300 Savage performance in a lever-action rifle equipped with a tubular magazine. It is nearly dimensionally identical to the more common .308 Winchester cartridge, the only differences being a rimmed base and thicker case walls. The Winchester Big Bore Model 94 Angle Eject rifle was the only rifle produced to fire the cartridge. Please see our photos and good luck!