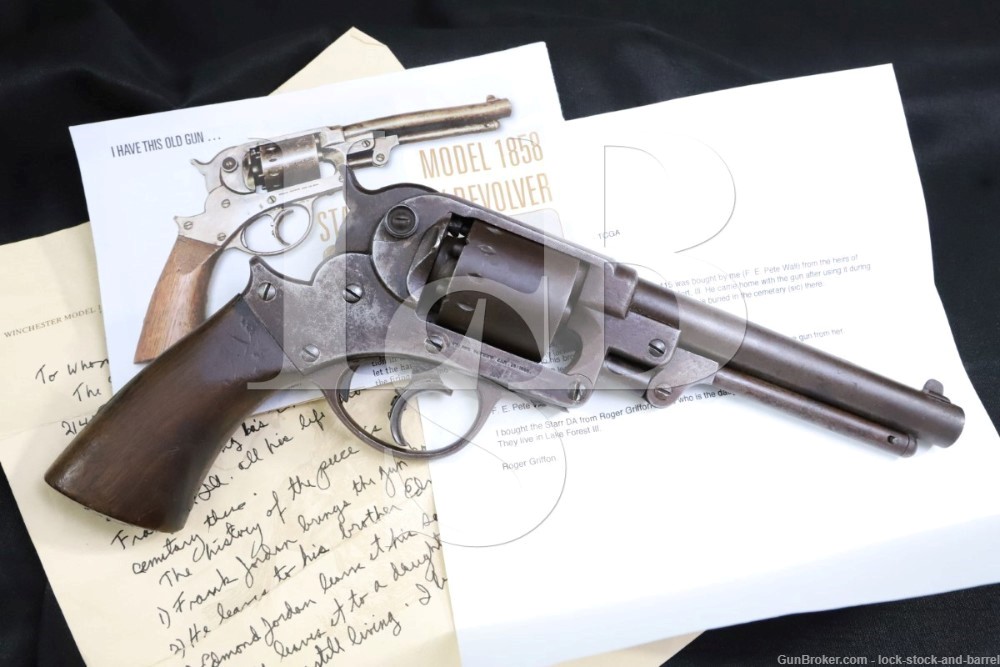 Stock Configuration & Condition/ Grip: The grip is one-piece wood. The grip has some light-moderate handling marks, compressions and nicks. Notably, the butt of the grip is coated in moderate handling wear which includes compressions and nicks. Also, the areas where the wood grip meets the frame have a black discoloration. There are no chips or cracks. Overall, the grip is in Very Good condition for an Antique.

Bore Condition: The bore is mostly-bright with sharp rifling. There is only light erosion in the bore.

Overall Condition: The revolver retains none of its metal finish. The gun is coated in light surface oxidation and has taken a patina color. There are light handling marks, nicks and scuffs on the revolver’s metal surfaces. Notably, the leading edges have light handling marks and there is a light turn line on the cylinder. The marking on the right side of the frame is a bit obscured by oxidation but the other markings remain clear. The screwheads have light-moderate tool-marks and are coated in oxidation, but they remain serviceable. Overall, the revolver is in Very Good condition for an Antique.

Mechanics: The return spring is weak. Otherwise, the action functions correctly. The cylinder locks with only light play on each chamber. The gun’s cylinder can be removed by unscrewing a knob at the rear end of the frame and tipping the barrel assembly forward. This is one of the first double-action handguns ever developed and it is not as simple to use. What appears to be the pistol’s “trigger” is actually a lever that controls the hammer with the sear situated at the back of the trigger guard. The double action involves pulling the  “trigger” back until it strikes the sear. Unfortunately, since this revolver’s return spring is weak and the “trigger” has to be manually reset after each depression. The rear end of the “trigger” has a notch that can be slid down, when this is done it will prevent the double-action from engaging when the “trigger” is engaged. Thus you can operate this handgun as a single action revolver as well by using the sear as a single action trigger after you have cocked the hammer. To return the revolver to its double action setting simply slide the notch up. Please be aware, the sear is sensitive and can be manually engaged easily thus extra caution should be taken to avoid an accidental discharge. We have not fired this revolver. As with all previously owned firearms, a thorough cleaning may be required to meet your maintenance standards.

Box Paperwork and Accessories: The revolver comes with a note from a previous owner about the gun’s history that is both handwritten and typed. Also included is a December 2020 article from the American Rifleman about Starr Revolvers.

Our Assessment: This is a Civil War-era Starr Model 1858 Army Revolver.

The gun was the brainchild of Ebenezer Townsend Starr (1816-1899), a man who came from a family of arms makers. Starr joined the Navy when he was 17 and served from 1834-1837. Following his brief service in the Navy, Starr was injured in a railroad accident which he never fully recovered from. Eventually Starr began to develop weapons and established “Starr Arms Co” of New York in the late 1850s. In 1861, following the outbreak of the Civil War, Starr was offered a commision in the Navy but he was unable to accept the position due to lingering complications from his accident. Despite this, he would prove a great service to the Union, providing the Federal Government with tens of thousands of both single and double action revolvers. Starr’s company provided the Union with its third largest order of revolvers with over 47,000 manufactured, his company was only surpassed by Colt and Remington. This particular specimen is a Model 1858 Army Revolver, an early double-action design. As one of the first double-action handguns to be developed, the action is a bit difficult to master and Union troops were definitely frustrated by this. Thus, Starr developed his Model 1863 which was a single-action revolver that proved more simple to use than the M1858. Starr’s company had come to rely on military contracts and the end of the Civil War did not bode well for his company. Unsurprisingly, Starr Arms Co. went under two years later in 1867. Although his company had failed, Starr remained an active inventor for most of his remaining years, he ultimately passed away in 1899 at the age of 83.

According to a letter included with the revolver the gun was acquired by Frank Jordan, a Union soldier during the Civil War. It apparently remained in Jordan’s family until it was purchased from one of his descendants. The revolver does not have any cartouches on the grip and lacks any inspector’s markings, indicating that the gun was privately purchased and not a military issued firearm. The grip is the only component which is not serial matched. The gun still has a very nice bore and well preserved nipples on the cylinder. The return spring is a bit weak on the trigger but the action engages without any other issues. This is an impressive relic from the Civil War era. Good luck on your bid!