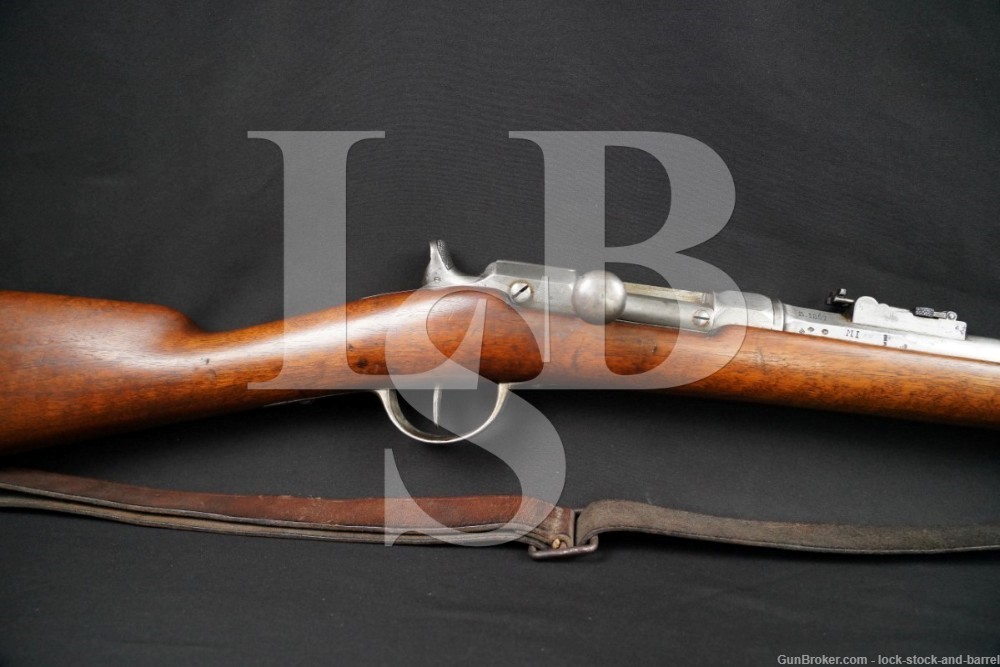 Markings: There is no visible import mark. The left side of the barrel shank, left side of the buttstock, bayonet lug, top of the bolt handle root, and the cocking piece are all marked with the serial number. The bottom of the bolt handle root is marked with small  stampings. The barrel shank is marked “AF”, “circled B” & “circled D”, “S.1867” and with several small stampings. Most of the metal parts on the rifle are marked with small French stampings. The buttplate is marked “1Z”. The right side of the butt is marked with a “crowned letter” and a  roundel on it that contains “S. MARS. D.  / MI / 1868”. The “MI” mark stands for Manufacture Imperiale. According to page 99 of Joe Puleo’s book, Bolt Action Military Rifles of the World: “The roundel has a plug of fruit wood at its center bearing the “MI” government ownership initials. This wood is harder than the wood of the rest of the stock and made it difficult to deface this mark in cases of theft. Today, this is sometimes all that is left of the roundel.”

Sights / Optics: The front sight is a small inverted “V” post atop a small base. The rear sight is a “V” notched escalator assembly when down. The left side of the rear sight base is marked “2 3 350 4” for use with the escalator. When flipped up it becomes a sight ladder marked “5 – 10” and “12” at the top.

Stock Configuration & Condition: The hardwood stock has a straight grip, nosecap, cutout for the included cleaning rod, barrel band, 2 sling loops, and a metal buttplate. The buttplate shows scratches and light surface erosion. The stock hardware shows scrapes and light oxidation. Both sides of the butt show long cracks that end at the buutplate. The wood shows several scrapes, scratches & compression marks. Many of the marks have damaged small portions of the surface wood. These marks have been oiled. The LOP measures 13 1/2 inches from the front of the trigger to the back of the buttplate. The stock rates in about Very Good overall condition as an antique.

Bore Condition: The bore is gray. The rifling is deep. There is erosion in the bore. It is more prominent at the muzzle and in the grooves.

Overall Condition: The rifle has lost most of its metal finish to cleaning. Several small thin scratches are visible from the cleaning. The metal shows scrapes, scratches, oxidation and areas of surface erosion. The screw heads show heavy use. Most of the markings are deep. Overall, this gun rates in about Very Good condition as an antique.

Mechanics: The action functions correctly. The action will not open unless the bolt is cocked. This is the way the rifle was designed. There is no defect.  We did not fire this rifle. As with all used firearms, a thorough cleaning may be necessary to meet your maintenance requirements.

Box, Paperwork & Accessories: The rifle comes with an unmarked leather sling. It shows scrapes, creasing, light cracking and discoloration. The metal shows oxidation. It is in Very Good condition.

Our Assessment: The French MLE 1866 Chassepot Infantry Rifle was made after the Prussians adopted their breech loading Model 1841, more commonly called the Dreyse Needle Gun. The MLE 1866 Chassepot is an improvement of the Prussian design.
This Chassepot is in nice shape for being 155 years old. The metal has been cleaned and the wood has been oiled. The rifle has nice markings on the metal & on the stock. This French Needle Fire rifle will round out a Military collection. Good luck.