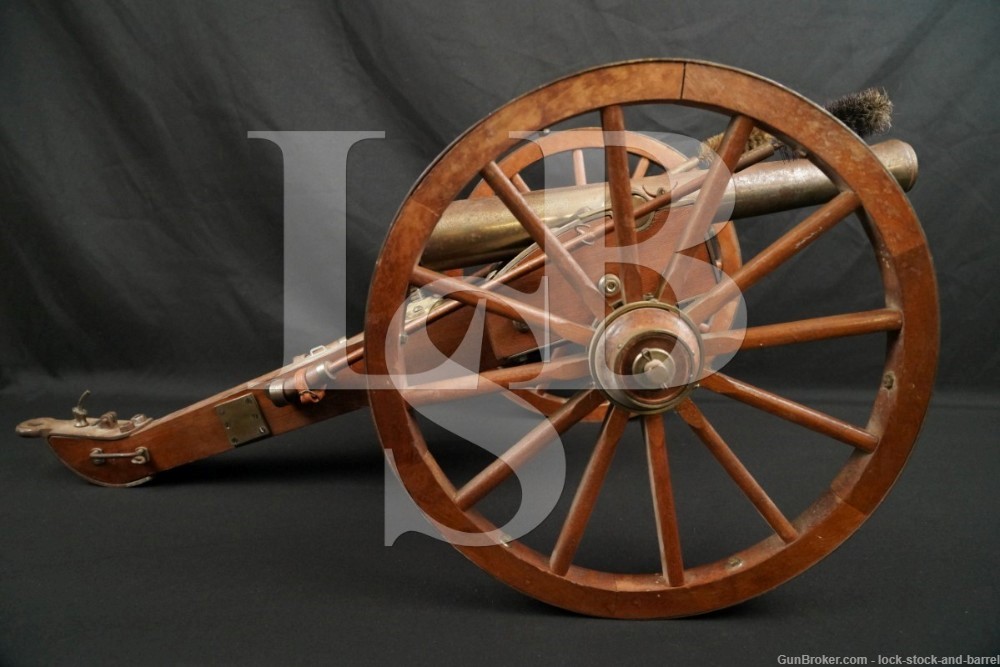 Markings: There are no markings.

Stock Configuration & Condition/ Grip: The cannon is mounted on a fully assembled carriage. The carriage has an elevating screw, two wheels that have 12 spokes fixed to six felloes with metal tires, two fully assembled trunnion plates fixed to the cheeks, attachments for two attachments (there are two cleaning rods and a ramrod included with the cannon) and a fully assembled stock with several small attachments (please see photos). Please note, the wheels are immobile and do not turn. There are light handling marks, nicks and scuffs on the carriage of the cannon. There are no chips or cracks. The metal parts of the cannon are coated in scattered patches of moderate oxidation and have largely taken a patina color. Overall, the carriage is in Very Good condition.

Bore Condition: The bore is grey with scattered erosion.

Overall Condition: The cannon has no metal finish. The metal components are coated in scattered patches of moderate oxidation and have taken a patina color. There are light-moderate handling marks, nicks and scuffs on the cannon’s metal surfaces. Notably, there are some burn marks around the flashhole at the top of the barrel. The screwheads are coated in oxidation but remain serviceable. Overall, the cannon is in Very Good condition.

Mechanics: We have observed nothing to indicate that this cannon will not function properly. We do not know the proper load for firing this cannon. We did not fire this gun. As with all used firearms, a thorough cleaning may be necessary to meet your maintenance requirements.

Box Paperwork and Accessories: There are two cleaning brushes and a wooden rod with a metal rip included with the cannon. The wooden rod may have been intended for use as a ramrod but it is not long enough for the bore.

Our Assessment: This is a miniature replica of a Civil War M1857 Napoleon cannon. The M1857 was not an American invention, it was the brainchild of French Emperor Napoleon III. During the early 19th century, most countries’ artillery units were equipped with a combination of field guns and howitzers which each required a specific type of ammunition. This created logistical issues for the military, a problem that Napoleon III wanted rectified. French weapons designers eventually developed a solution, the canon obusier de 12. The gun was extremely versatile as it could fire shells, solid shot, spherical cases and canisters, in other words a single gun that served the purposes of both a howitzer and field gun. This innovative artillery piece attracted the attention of US military officials who were looking to replace the obsolete M1841 field guns and howitzers which had been used during the Mexican-American War. The Napoleon was modified by the US and named the Napoleon M1857. The newly acquired gun was still undergoing field tests when the Civil War broke out in 1861. The cannon would see extensive use during the conflict with the North manufacturing far more than the South. Once the war had ended in 1865 it was clear that the M1857 was obsolete, breech-loaded and rifled artillery would come to replace smoothbore muzzleloaders like the Napoleon M1857. This is a nicely crafted replica which would make a great mantlepiece/display item and should appeal to fans of military history. Good luck on your bid!