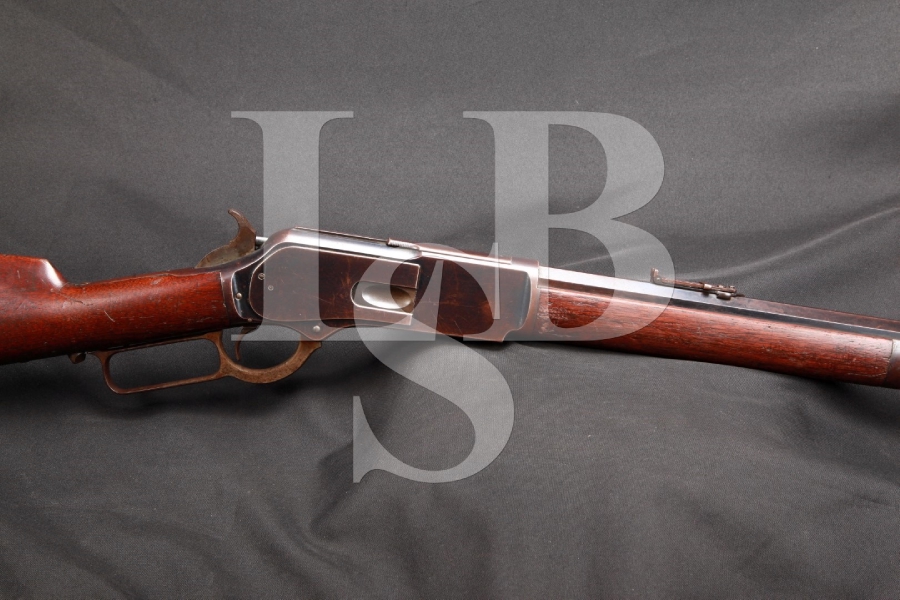 SOLD FOR: $5,804
Make: Winchester
Model: 1876
Serial Number: 27518
Year of Manufacture: 1882
Caliber: .45-60 Winchester
Action Type: Lever Action with Full Length Tubular Magazine
Markings: The top of the barrel is marked “Winchester’s-Repeating Arms, New Haven, CT. / King’s-Improvement-Patented-March 29.1866. October 16.1860.” and “Cal. 45-60”. The lower tang is marked “27518” at the rear and with “3” just in front of the trigger. The upper tang is marked “MODEL 1876”. The bottom of the brass carrier is marked “45-60”.
Barrel Length: The octagon barrel is 28” in length. .
Sights / Optics: The front sight is a German silver blade dovetailed into the barrel. The rear sight is a flip-up ladder sight. When the ladder is folded down, there is a deep “V” notched sight presented. When the ladder is folded up, the rear sight is a “V” notch in the slider. The ladder is marked from “2” to “10” along the right side. The upper tang has a single drilled, tapped and filled hole for a tang sight.
Stock Configuration & Condition: The stocks are two piece walnut with a dark oiled finish. The buttstock has a blued crescent steel buttplate with a smooth straight grip, and the forend has a blued metal nose cap. The buttplate has a hole in it with a brass trapdoor for storage of cleaning equipment. The stocks are dark with oil staining, which is heaviest at the butt and on the forend at the receiver. The stocks show numerous scratches and light compression marks. There are also several gouges out of the right side of the buttstock, two long compression marks on the right side, a small chip along the right edge of the upper tang, a long chip along the right front of the lower tang and a minor chip out of the left edge of the lower tang. The forend shows gouges out of the wood at its right rear with two deep compression marks on its underside near the nosecap and a deep scratch on the left side at the nosecap. The LOP measures 13 5/16” from the front of the trigger to the back of the buttplate. The buttplate shows surface loss with a brown patina forming and a few minor compression marks. It is in about Fine condition. The stocks rate in about Good overall condition.
Type of Finish: The rifle is blued with a case colored hammer and lever.
Finish Originality: The finish is original.
Bore Condition: The bore is bright at the breech and grey at the muzzle. The rifling shows moderate wear. There are rings of moderate erosion in the first 3” of the bore at the muzzle.
Overall Condition: This rifle retains about 80% of its metal finish. There is thinning on the edges of the barrel, dust cover and receiver, and on the nosecap. The edges of the barrel are sharp and the barrel shows only a few very light handling marks and scattered light spots of surface frosting. The receiver shows several marks through the finish, light surface frosting and a few spots of light solid erosion. The upper tang shows thinning with a brown patina forming, and the lower tang shows several marks through the finish and two spots of pinprick surface erosion in front of the trigger. There is still some case coloring present on the sides of the lever and hammer, which otherwise show a brown patina developing. The hammer checkering shows moderate wear. The screw heads are mainly sharp but the upper tang screw and the screw behind the left side cover in the receiver are slightly distressed. The markings are clear. Overall, this rifle rates in about Fine condition.
Mechanics: The action functions correctly, though we have not fired this rifle. It has a dust cover on the receiver that slides on an integral rail typical of the Third Models.
Box, Paperwork & Accessories: None
Our Assessment: Per Wikipedia: “The Winchester Model 1876 was a heavier-framed rifle than the Model 1873, and was the first to be chambered for full-powered centerfire rifle cartridges, as opposed to rimfire cartridges or handgun-sized centerfire rounds. While similar in design to the 1873, the 1876 was actually based on the prototype 1868 lever-action rifle that was never commercially produced by Winchester. It was introduced to celebrate the American Centennial, and earned a reputation as a durable and powerful hunting rifle that was also used by the Canadian North-West Mounted Police and Texas Rangers. Theodore Roosevelt used one on his early hunting expeditions in the West and one was found in the possession of Apache warrior Geronimo after his surrender in 1886.”. Unfortunately, the 1876 lost popularity when the Model 1886 was introduced in heavier calibers. The original .45-60 blackpowder cartridge, a shortened version of the .45-70 Govt., fired a 300 grain bullet with a muzzle velocity of about 1,315 fps., which was more than adequate for elk and moose. This is a 3rd Model 1876 rifle with an integral rail in the receiver for its dust cover, although by serial number it should have been the earlier 2nd Model with its thumbprint dust cover and the rail held on with screws. The rifle is in Fine condition with about 80% of its original finish remaining. The edges of the barrel, receiver and dust cover show thinning. There is light surface frosting on the barrel and receiver, with a few spots of erosion on the left side of the receiver and its lower tang. The edges of the barrel are sharp and the markings are all clear. The stocks show a few deep compression marks with chips along the edges of the lower tang. The bore is very shootable with moderate wear in the rifling and moderate erosion from the muzzle back about 3”. The 1876 Winchester was only made for 21 years, with a total of about 63,871 made in rifle, carbine and musket formats. This great looking rifle is a very nice find for the Winchester collector.