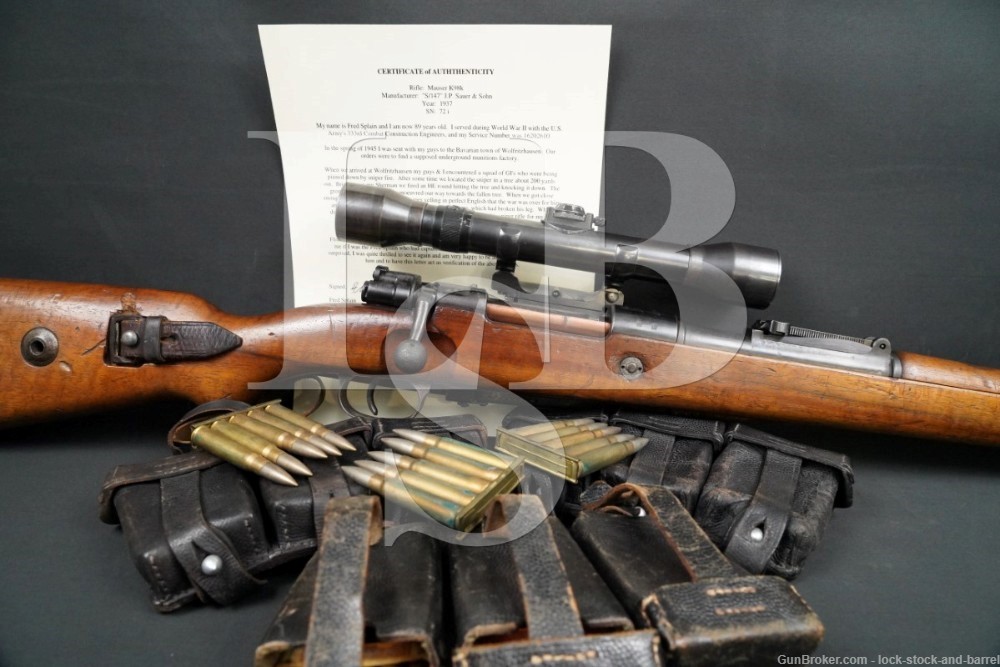 Sights / Optics: The front sight is an inverted “V” post set atop a ramped base and under a protective hood. The rear sight is a “V” notched blade attached to a sliding sight escalator marked from “1-20”.
The rifle has a fixed 4 power scope attached. The side rail mount is attached to the left side of the receiver by screws. A compression lever and screws hold the top half of the mount to the base. The scope uses a tapered post reticle. The post has small black flecks along the sides. The view is slightly dim. There are small gray lens marks scattered through the view and along the edge. The scope tube shows small scrapes, scratches and discoloration from oxidation. The scope assembly is in about Very Good condition.

Stock Configuration & Condition: The hardwood stock has a pistol grip, scallop for the bolt handle, nose cap with bayonet lug, hole for the included cleaning rod, barrel band with sling bar, through bolt, slingwell, sling pass through, domed washer, and a metal buttplate. The buttplate shows scrapes, light surface erosion and it has lost a piece of edge metal; possibly to a bullet. It is also marked with 3 deep punch marks. The nosecap and barrel band have surface erosion bleeding through the new finish causing discoloration. The buttstock shows a few deep marks which have removed wood. There is a crack next to the missing wood at the base of the pistol grip. The wood stock shows numerous scrapes, scratches and compression marks. Several have damaged small portions of the surface wood. The LOP measures 13 inches from the front of the trigger to the back of the buttplate. The stock rates in about Very Good overall condition.

Bore Condition: The bore is gray. The rifling is deep; shallow at the muzzle. There is erosion throughout the bore. It is more prominent in the grooves and at the muzzle.

Overall Condition: This rifle retains about 66% of its metal finish as refinished. Small scratches, small dents and varying degrees of surface erosion show through the new finish. The receiver, barrel shank and bolt assembly have surface erosion bleeding through the new finish causing discoloration. The metal shows scrapes, scratches and handling marks. The most prominent marks are on the barrel and trigger guard. The screw heads show use. One of the bottom metal capture screws has lost ½ of its screw head.  The markings are well defined. The “eagle / swastika” on the receiver is faded. Overall, this rifle rates in about Good to Very Good condition as refinished.

Box, Paperwork & Accessories: The rifle comes with a notarized “CERTIFICATE OF AUTHENTICITY” from Fred Splain who is the Army soldier who captured this Sniper Rifle during the Spring of 1945. It lists the circumstances of the capture and subsequent sale of the rifle. The certificate is in Fine condition.
The rifle comes with a scope assembly; see above. The rifle also comes with a leather sling, muzzle cover and 3 triple leather stripper clip pouches.
The unmarked K98 sling shows scrapes, discoloration and creasing. It is in Very Good condition.
The muzzle cover shows small scratches, discoloration and light surface erosion. It is in Good condition.
The leather pouches hold two 5 round stripper clips in each of the 3 pockets. One of the pouches is filled with 30 rounds of 8mm ammo. The pouches show scrapes, discoloration and creasing. They are in Very Good condition. The ammo shows oxidation and is in Very Good Plus condition.

Our Assessment: This German K98 was made in 1937 by J.P. Sauer und Sohn Gewehrfabrik, Suhl of Germany. It eventually was equipped with a sniper scope and used as a Sniper Rifle during WWII. The rifle comes with accessories including and Certificate of Authenticity.
The Certificate of Authenticity from Fred Splain who is the Army soldier who captured this Sniper Rifle during the Spring of 1945. It lists the circumstances of the capture and subsequent sale of the rifle. In short a German sniper was using this rifle to pin down U.S. soldiers. A tank was called in to fire on the sniper’s position. The sniper was injured but alive and eventually surrendered. Splain and others had to dig the sniper out of the debris. Splain found this sniper rifle in the debis and kept it as a war trophy.
This K98 Sniper is a collectible rifle with a great story. Please see our photos to read the certificate. Good luck.