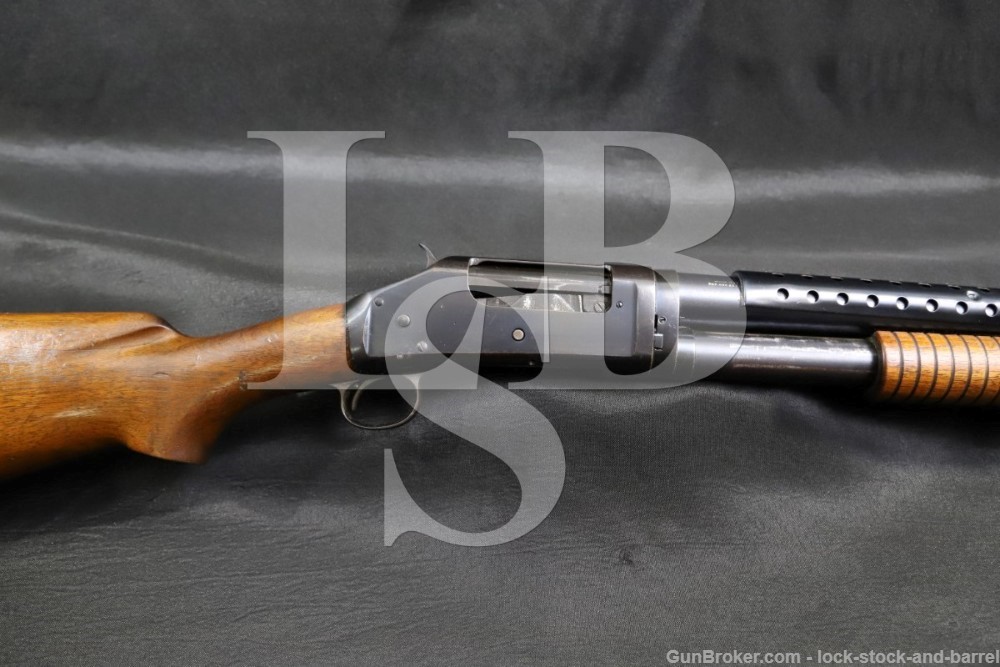 Sights / Optics: The front sight is a bead set on the base of the heatshield/bayonet lug. There was a bead on the barrel which has been ground off (see Our Assessment)

Stock Configuration & Condition: The stocks are walnut, the slide handle is grooved and the buttstock has a pistol grip and straight comb. There is a sling plate mounted in the belly and a sling swivel on the bayonet lug. Ther stocks have some scattered nicks, dings, scuffs and scratches. The most notable marks are in the buttstock. There are no chips or cracks. The LOP measures 13 3/4” from the front of the trigger to the back of the checkered black hard rubber buttplate. The plate is shy to the wood at the heel with scattered light wear and well defined checkering and lettering. The stocks rate in about Very Good overall condition.

Bore Condition: The bore is mostly bright but there is some discoloration and faint surface erosion at the muzzle. There are three little bumps in the bottom of the bore at the location of the three heatshield mount screws and another in the right about 6″ from the muzzle.

Overall Condition: This shotgun retains about 90% of its metal finish. The finish is thinning at most edges. There are scattered light nicks, scuffs and scratches. The action shows operational wear. There is some scattered minor surface oxidation. The screw heads show use with serviceable slots. The markings are sharp, some are filled with white paint. Overall, this shotgun rates in Very Good-plus condition.

Our Assessment: After observing the Great War for the first three years, it became clear to the U.S. that serious close-range firepower was needed in trench warfare. The Model 1897 Trench grade was an evolution of this idea. The pre-existing Winchester Model 1897 was modified by adding a perforated steel heat shield over the barrel which protected the hand of the user from the barrel when it became over-heated, and an adapter with bayonet lug for affixing an M1917 bayonet. They were so effective and brutal in combat that the German high command once announced they would execute any US soldier captured with one in his possession. The 1897 Trench Gun would go on to see service in the second World War all the way through to the Gulf War. This one is a later WWII-era gun, in a serial range where other observed examples have a ground-bead. Most trench gun barrels were made with no bead as the sight was installed on the heat shield/bayonet lug, but late examples appear to have been constructed with barrels that had a bead removed. This example has some scattered wear but has a good bore, great mechanics, and nice markings. This is a nice military 97 that will be tons of fun to shoot at the range and will be a nice addition to your collection. Please see our photos and good luck!