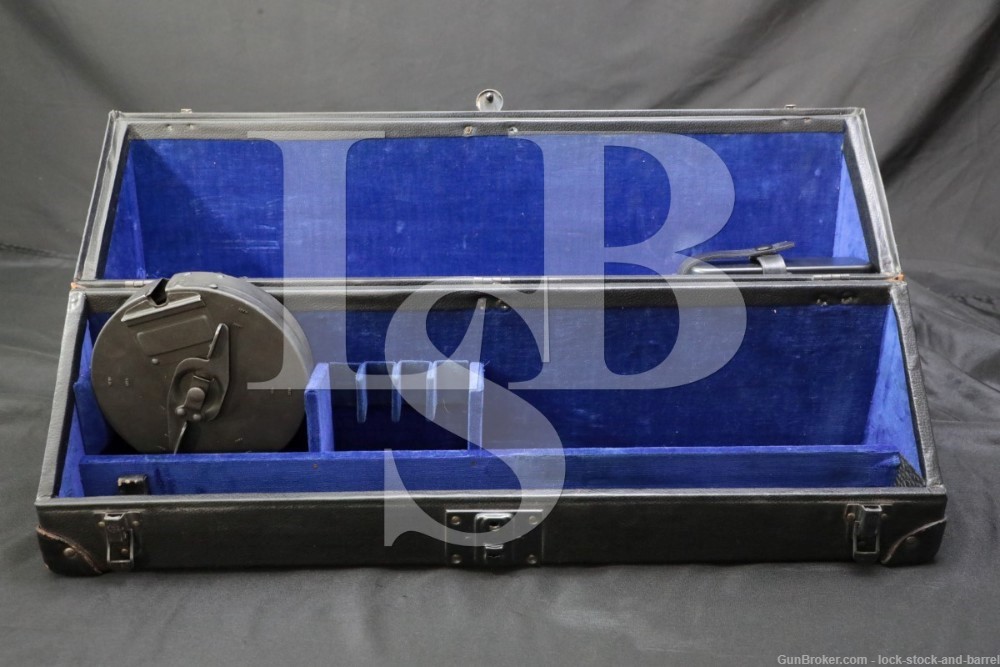 Year of Manufacture: The FBI used the Thompson SMG between 1933-1970. These accessories were likely manufactured sometime between then.

Type of Finish: The case is wood with a black coating and leather padded edges. The drum is parkerized.

Overall Condition: The drum retains about 94% of its original finish with scattered light scratches, slightly thinned edges, and some scattered faint surface oxidation. The drum is in about Fine condition.

The case shows some leather material loss on the handle. The padded edges show some scuffs and light finish loss. There are scattered little nicks and scuffs throughout the flats. There are no chips or cracks. The case rates in about Very Good condition.

Accessories: Included in the case is a cleaning kit and a lock key.

Our Assessment: The Thompson submachine gun is a blowback-operated, air-cooled, magazine-fed selective-fire submachine gun, invented by the United States Army Brigadier general John T. Thompson in 1918. It was originally designed to break the stalemate of trench warfare of World War I, but was not finished until after the war ended. The FBI had also acquired Thompsons in 1933 following the Kansas City Massacre. The FBI used Thompsons until they were declared obsolete and ordered destroyed in the early 1970s. This is an example of a case that was used by the FBI for carrying Thompsons. It is equipped with slotted spaces for the included drum, as well as 20 & 30 round magazines. This case also comes with a lock key and a cleaning kit. Please see our photos and good luck!