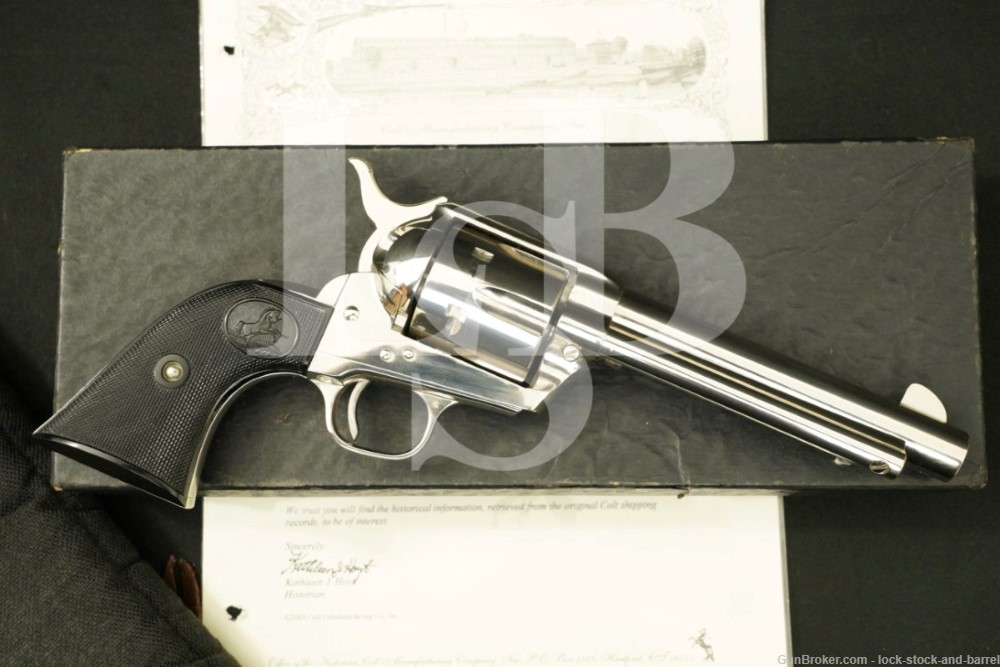 Stock Configuration & Condition: The grips are two-piece checkered black hard rubber with rampant colts in ovals at their tops. The right panel has a small patch of smoothed checkers under the rampant colt at the front, possibly from shaping at the factory and the bottom of the right panel has a light, stuttered scratch. Otherwise, there are only light handling marks. The checkering is generally sharp. There is good detail in the rampant colts. There are no chips or cracks. Overall, the grips are in Fine condition.

Overall Condition: This revolver retains about 97% of its metal finish. The most notable balance are some tiny spots of finish loss at edges of the trigger guard assembly, some showing minor erosion, there is a similar spot on the top-left edge of the backstrap next to the hammer. The trigger guard shows infrequent minor bubbling in the nickel finish. There is some slight cloudiness in the finish of the grip straps. There is a nick on the rear edge of the cylinder between two chambers. The cylinder has a light, incomplete turn line with very small dents at the front edge of each lead-in groove from the bolt. The screw heads range from sharp to lightly tool marked with strong slots. The markings are clear. Overall, this revolver is in Fine-plus condition.

Box, Paperwork & Accessories: This revolver comes with a hinge-lid cardboard Colt box with black exterior, green interior, model-matching label, wax paper, manual, warranty card stapled to the original packing list, cleaning brush and a Colt Historian letter. The box shows storage wear, mostly at edges and corners with one tear at the front edge of the lid portion. The letter confirms that this revolver shipped in its current configuration (see Our Assessment) on December 12, 1956 to a Mr. Jasper J. Mazar in Binghampton [sic] New York as the only gun of the same type in the shipment. Interestingly, while the gun shipped to Mr. Mazar, it was sold to Olin Mathieson Chemical Corporation, Winchester Plant in New Haven, Connecticut!

Our Assessment: The Colt Single Action Army is perhaps the quintessential old west handgun, produced for more than a century, serving the U.S. Army as its sidearm from 1873 into the first world war and captivating audiences on the silver screen. The SAA was discontinued by Colt as it tooled up to provide for the WWII war effort, and it was thought by Colt that the design was obsolete, swing-out cylinder revolvers had been around for half a century and autoloaders were gaining in popularity.

Then, with the advent of television and western programs such as Hopalong Cassidy, The Lone Ranger, The Cisco Kid, and The Gene Autry Show, American interest in the guns that won the west was reborn. In 1956, Colt reintroduced the Single Action Army, this new production run now referred to as the 2nd Generation SAA’s, and this example comes from that first year of production.

In addition to being very early for the 2nd Generation, the revolver is also rather scarce as it has a factory nickel finish. It is also rather interesting as the most common grips to be fitted to nickel SAAs in this period were two-piece smooth walnut panels, where the checkered hard rubber grips that were standard for blued guns was less common on the nickel guns. The revolver is in Fine-Excellent condition with a great bore, strong mechanics and the vast majority of its original finish remaining. The gun is chambered for the classic .45 Colt cartridge and its 5 1/2″ barrel makes a nice compromise between the fast-handling of the 4 3/4″ and the sight radius of the 7 1/2″ barrels. The gun comes with its original box as well as a Colt letter confirming its original configuration.

According to Don Wilkerson’s book “The Post-War Colt Single-Action Revolver 1955-1975”, the lowest serial number in his survey which had a nickel finish was 6049SA. Wilkerson noted that “The nickel finish became available in 1957. The earliest shipping date for a standard nickel revolver in my survey is June 4, 1957.” and “These early nickel revolvers were shipped almost a year later than the majority of revolver in their same serial number range.”

This revolver’s letter indicates that it was shipped in December of 1956, making it one of the very earliest (we have not been able to confirm if it is the first) 2nd Generation SAA to be made with a nickel finish.

Perhaps most interesting, while the gun shipped to a private individual in the Southern Tier of New York, it was purchased by the Winchester Plant, then a subsidiary of Olin Mathieson Chemical Corporation. Even without this documentation, this scarce nickel Single Action Army would make a great addition to even an advanced Colt collection as one of the earliest of the second generation, but its documented history will certainly enhance its value and interest to collectors. Please see our photos and good luck!