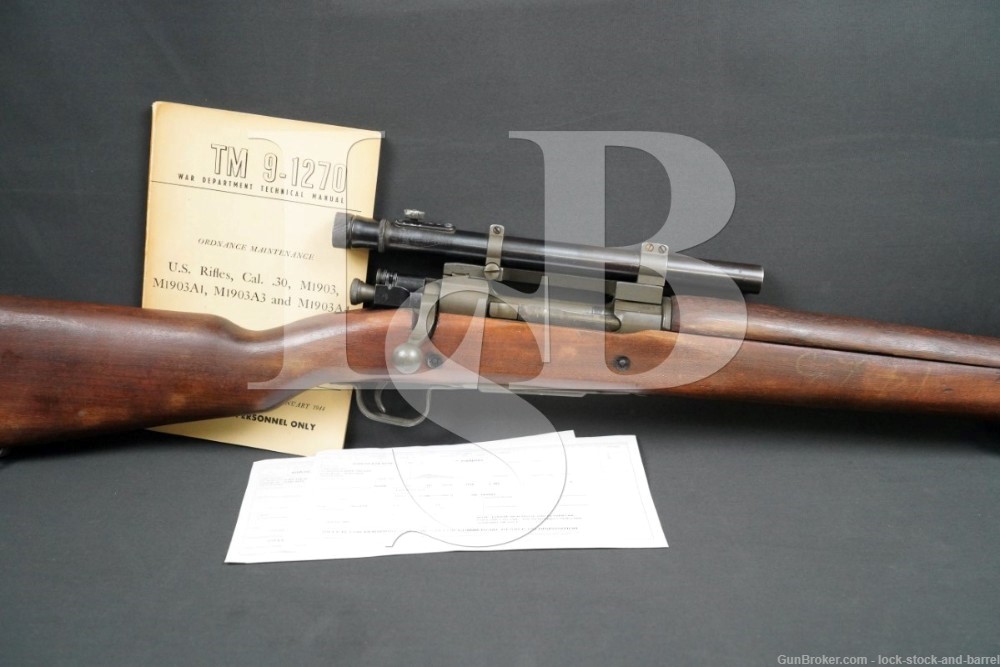 Sights / Optics: The front and rear sights have been removed to facilitate the use of a scope.
A one piece Redfield scope base is attached to the top of the receiver by screws and by the rear sight base. The front of the scope base has small shims installed between the receiver and base. The one piece mount has two scope rings attached. The base & rings show small scrapes & handling marks. They are in Very Good Plus to Fine condition. The rings hold a 2.5 fixed power scope with crosshairs reticle. The scope’s view is slightly dim and slightly blurry around the edges. The scope tube shows scrapes and scratches. The front half of the tube shows light thinning. The tube has been treated with cold blue. The tube shows discoloration from both the cold blue and oxidation. The scope is in about Very Good condition.

Stock Configuration & Condition: The Type 9B stock is a “Scant-Grip” replacement stock used for 03A4 rifles (page 117). The bolt handle cut out is swept back to match the angle of the 1903A4 bolt handle. The Type 9B was made without finger grooves.
This Type 9B stock has had the bolt handle cutout and magazine cutoff scallop widened. The grip has been lightly shaped (sanding marks are visible).
The two piece oil stained hardwood has a pistol grip, nose cap with bayonet lug, stacking loop, barrel band, two sling loops, two through bolts, and a metal buttplate with hinged door for storage. The buttpateand stock hardware have been refinished. Surface erosion shows through the finish on the buttplate (light) and on the barre band (heavy). The wood shows scrapes, scratches and compression marks. Most of the marks are small or light. The LOP measures 13 inches from the front of the trigger to the back of the buttplate. The stock rates in about Very Good Plus to Fine overall condition as refurbished.

Bore Condition: The grooves are semi bright. The rifling is sharp. There is fouling in the grooves which should clean up some. There is light intermittent erosion in the grooves at the muzzle.  The bore shows an M.E. of 1.
According to page 354 of Joe Poyer’s book, The M1903 Springfield Rifle and its Variations, Remington sniper rifles were made with 2 groove and 4 groove barrels.

Overall Condition: This rifle retains about 97% of its metal finish. The metal shows scruffs, light scrapes, and a few small scratches. The barrel and left side of the receiver show light discoloration from both oil residue and oxidation. Most of the discoloration is from dried oil residue. The extractor shows light thinning and a mottled finish. We do not know if this is a replacement part. The screw heads show heavy use. The markings are deep. One of the numbers in the barrel date is lightly struck. Overall, this rifle rates in about Very Good Plus to Fine condition.

Our Assessment: When the United States Military entered World War II in 1941, there was not a single sniper rifle in military inventory. All the sniper rifles developed for use during World War I had long since been disposed of.
On the Eastern Front, and Soviet troops had deployed thousands of sniper rifles to great effect. The British and Canadians had resurrected World War I-vintage sniper rifles and were using them to good effect in Africa.
U.S. forces were in need of a new sniper rifle. The U.S. Army’s Ordnance Department decided that a sniper rifle could be made quickly based on the Model 1903A3 rifle that was just beginning to come off the production lines at Remington. By the end of 1943, the new Model 1903A4 sniper rifle began to reach front line troops. The new sniper rifle was essentially a modified Model 1903A3 infantry rifle. 1903-A4 receivers are marked “MODEL 03-A3” so that any rifle rejected as a 1903A4 Sniper could be used as a service rifle.
WWII Remington Sniper rifles are highly valued by collectors due to their relatively low production numbers and their contribution to the war effort.
This Remington Model 1903-A4 Sniper Rifle was made during WWII. It has nice Remington markings on the receiver, barrel, bolt, and other small parts. The rifle is in 1903-A4 sniper configuration and has the correct serial number to fall within the 1903-A4 serial number ranges. It was purchased through the Civilian Marksmanship Program (CMP) as a Model 1903-A4. It looks great and is topped with a Weaver Model 330 scope. The rifle and scope should keep you smiling out at the range. This 1903A4 Sniper will add to your WWII collection. Good luck.