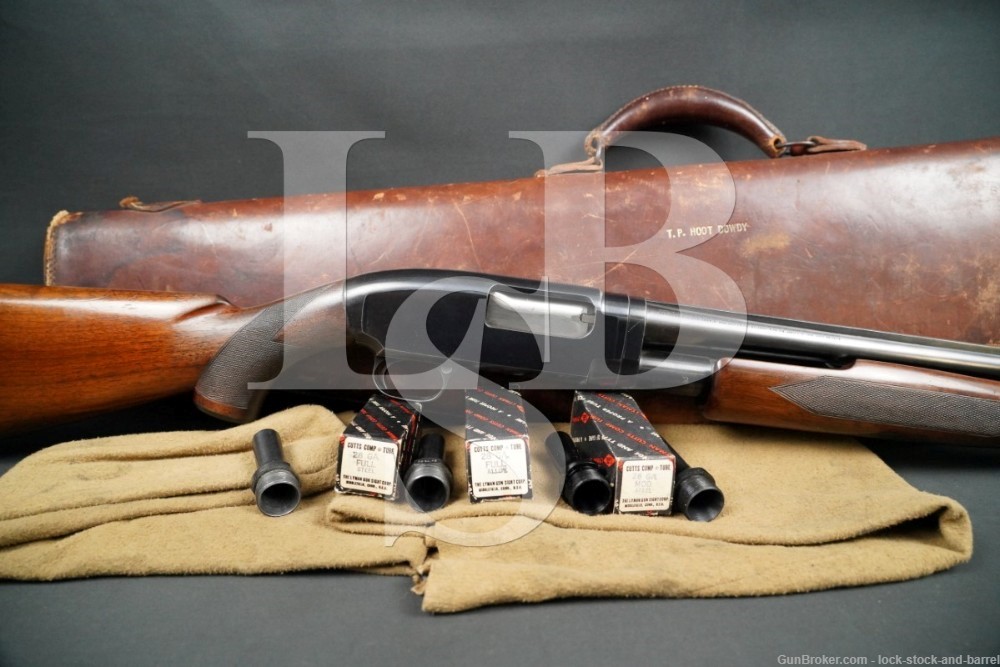 Markings: The left side of the barrel is marked “WINCHESTER PROOF STEEL”, “MADE IN U.S.A. / -WINCHESTER- / TRADE MARK”, and “2 7/8 CHAM. / MODEL 12-28 GA. /  SKEET.”.  The right side of the barrel is marked “MADE IN U.S.A. WINCHESTER REPEATING ARMS CO. NEW HAVEN, CONN.” and with patent dates. The receiver extension and bottom of the receiver are marked with the serial number. The magazine tube and barrel extension have indexing arrows. The top of the chamber to the left of the solid rib and the top of the receiver are both marked with an oval “WP” proof. The receiver extension is also marked “SKEET”.

Sights / Optics: The front sight is a metal bead set on the Cutts Compensator. There is a smaller metal midbead on the rib at the midsection.

Stock Configuration & Condition: The stocks are two-piece checkered walnut with an extended slide handle, capped pistol grip, straight comb, and checkered black plastic Winchester buttplate. There is a thin crack on the bottom of the wrist at the bottom tang. There are areas of thinning and finish loss, the most noticeable are on the wrist and on the forend at the rear. There are some scattered draglines, light compressions, and a couple light hairline scratches. There are some scattered light handling marks. There are a few scrapes, the most noticeable is on the left side of the buttstock at the heel. The checkering is mostly strong but has some scattered light handling wear. The LOP measures 14″ from the front of the trigger to the back of the buttplate. The plate has some scattered nicks and light wear but well-defined checkering and lettering. Overall, the stocks are in about Very Good-Fine condition.

Mechanics: The action functions correctly. This shotgun will slam-fire as designed. We have not fired this shotgun. As with all used firearms, a thorough cleaning may be necessary to meet your maintenance standards.

Box, Paperwork & Accessories: Included is a leg of lamb case and the previously described screw-in chokes.

Our Assessment: The Model 1912 (shortened to Model 12 in 1919) was the next step from the Winchester Model 1897 hammer-fired shotgun, which in turn had evolved from the earlier Winchester Model 1893 shotgun. The Model 12 was designed by Winchester engineer T.C. Johnson, and was based in part on the M1893/97 design by John M. Browning, in that it used a sliding forearm or “pump action” to cycle the mechanism. With forged and machined steel parts, the ultimate reason for discontinuation of the Model 12 in 1964 was that it was simply too expensive to produce at a competitive price. When the money talks, the people listen. The primary competition at this time came from the much less expensive Remington Model 870, which had been introduced in 1959. This Model 12 is chambered for the rarest of the chamberings, 28 gauge. This one has been installed with a Cutts compensator.  The receiver has the appropriate lifter stop tab and the magazine tube has the proper crimp for the 28 gauge. The shotgun looks and functions good, it will be a nice addition to your collection and has decades of use left in it. Good luck and happy bidding!