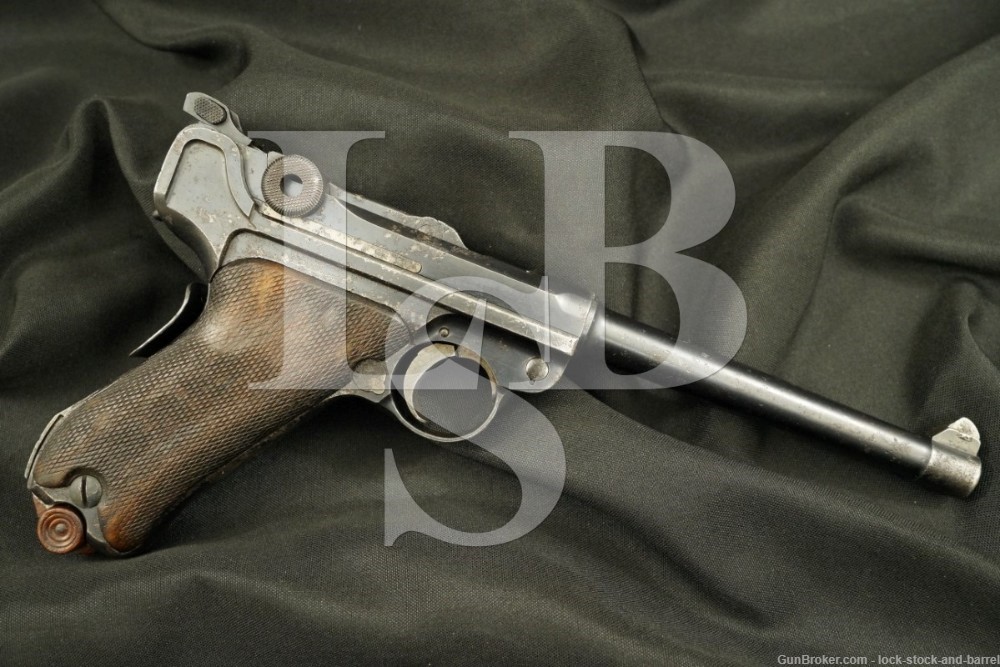 Sights / Optics: The front sight is a serrated, ramped blade dovetailed to a serrated, ramped base fixed to a boss at the muzzle. The rear sight is a two-position “V”-notch assembly at the back of the rear toggle link. There is a button on the right of the notch assembly which allows the sight to be moved forward or rear to the 100 or 200 yard position, respectively.

Stock Configuration & Condition: The grips are two-piece checkered wood. The grips have moderate handling wear with some scattered nicks, dings, scuffs and scratches. There are some areas of discoloration. Some checkering is well defined with other areas compressed or worn smooth. There are no chips or cracks. Overall, the grips are in Good condition.

Type of Finish: Blued, some small parts Strawed, the interior of the barrel extension and frame are Bright

Bore Condition: The bore is dark gray with well defined rifling. There is light erosion on the lands and moderate erosion in the grooves.

Overall Condition: This pistol retains about 70% of its metal finish. The finish is thinning at all edges. The blance is mostly in scattered light erosion and pitting. There is some erosion and pitting on the interior portions, visible when the pistol is field-stripped. There are some scattered light nicks, scuffs and scratches. The action shows operational wear. Much of the straw finish has muted, but there is some remaining. The screw heads are tool marked with strong slots. The markings are clear where not intentionally removed. Overall, this pistol is in Good-plus condition.

Mechanics: The action works correctly. The barrel assembly has barely perceptible play to the frame. We have not fired this pistol. As with all used firearms, a thorough cleaning may be necessary to meet your maintenance standards.

Our Assessment: The Luger (Pistole Parabellum or P-08) is perhaps the most aesthetically and ergonomically pleasing of all autoloading centerfire pistols. It is also one of the strongest, most accurate and most recognizable service pistols ever made. Georg Luger developed his famous pistol in 1898-1899 (starting with the Borchardt/Luger transitional pistol). The Luger is, essentially, a much improved Borchardt type pistol, which was itself based on the toggle action concept used by Sir Hiram Maxim in the world’s first practical machine gun. This is an interesting variant, a DMW 1906 Naval Luger, 1st Issue Altered. The pistol was made in 1906 with all matching numbers and the correct proofs, though this pistol was altered, as many of the 1906 models were. The original configuration of the safety was engaged by pushing the lever forward, and when pulled to the rear the pistol was ready to fire. It was determined that this led to the safety being unintentionally disengaged and the mechanism was modified with the opposite arrangement. This was performed at dockyards or armories, and the quality of the re-marking varied. This example has a well-marked “GESICHERT” with the previous marking milled away in a neat, clean line. The pistol has about 70% of its original finish remaining with much of the balance from the sort of erosion one would expect from a pistol which served so near to salt water. There were about 19,000 of these pistols made between 1906 and 1912 for the German Navy with a couple thousand more produced with the new safety configuration straight from DWM. This is a somewhat rare pistol; many of the Naval models were lost in the wars that would come to Europe in the first half of the 20th Century. Especially with its matching numbers, it is sure to gather the attention of the Luger collectors out there. Please see our photos and good luck!