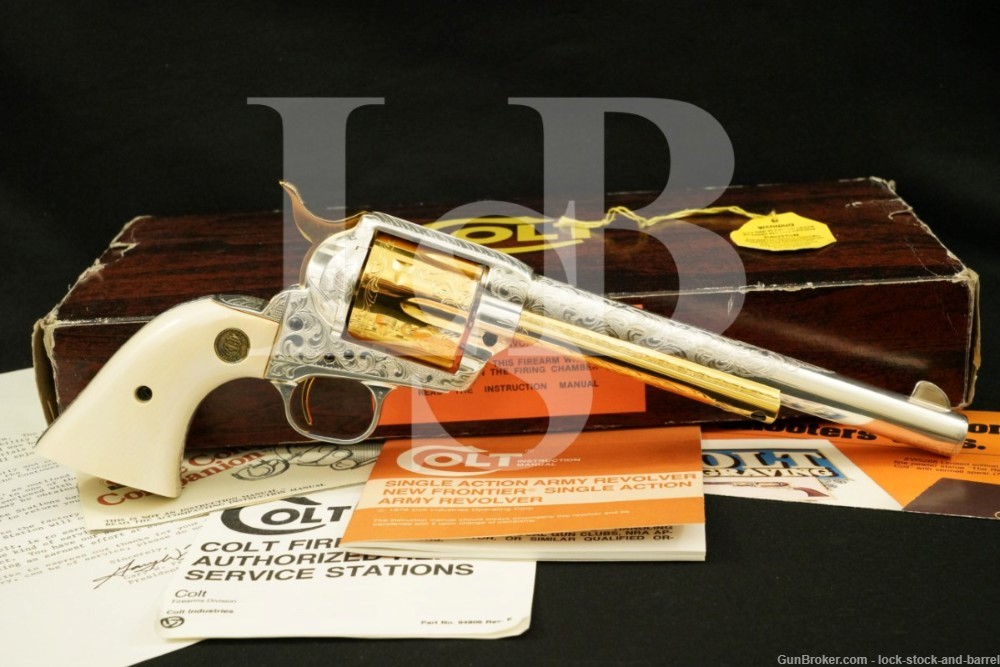 Year of Manufacture: The serial numbers on the left of the grip frame would indicate 1981 production and Blue Book of Gun Values also indicates 1981 production, but the left grip has a 1982 dated signature. We suspect that production began in 1981 and the edition was released in 1982. ATF C&R

Markings: The top of the barrel is marked “COLT’S PT. F.A. MFG. Co. HARTFORD, CT. U.S.A.”. The left side of the frame is marked “FEB. 26. 1846 / jAN. 10. 1917” (Bill Cody’s birth and death dates) followed by the Rampant Colt. The underside of the frame is marked with the serial number, “69BB”. The rear face of the cylinder is marked “44-40”, the front is marked “8911”. The left side of each portion of the grip frame, under the grip, is marked  with “SA48911”. The left of the frontstrap is also marked “COLT ENG”. The inside of each grip panel has “69BB” and “3” or “m” hand-written. The left of the trigger guard has “VP” in triangle and “K”, the right is marked “Z”. The frame, grip frame, cylinder and barrel have foliate scroll engraving with punch-dot fills and western-style engraving motif. The left of the barrel has a Pony Express rider and “Buffalo Bill Historical Center / WINCHESTER MUSEUM / 1 of 250”. The left recoil shield has a buffalo-head engraving and the backstrap is engraved with Bill Cody’s signature. The left grip panel is etched with a portrait of Bill Cody, his “TE” monogram cattle brand and a very small monogram which appears to be “GP” or “CP” over “1982”.

Sights/Optics: The front sight is a quarter-round blade fixed to the front of the barrel. The rear sight is a square notch integral to the topstrap.

Stock Configuration and Condition: The grips are two-piece smooth bone panels with inset Colt Custom Shop medallions and the etching previously mentioned on the left panel. The grips have no notable wear or damage, only light handling marks. There are no chips or cracks. Overall, the grips are in Excellent condition.

Overall Condition: This handgun retains about 99% of its metal finish. The cylinder has a faint, incomplete turn line, not through the finish. Otherwise, there are only light handling marks. The screw heads are sharp. The markings are clear. Overall, this revolver rates in Excellent condition.

Mechanics: The action functions correctly. The trigger is crisp. The cylinder locks with very little play on each of their 6 chambers. We did not fire this revolver. As with all used firearms, a thorough cleaning may be necessary to meet your maintenance standards.

Box, Paperwork, and Accessories: This revolver comes in a faux-wood cardboard Colt box with serial-matching Colt Custom Shop label, two-piece styrofoam tray, yellow “stop-sign” hang-tag and an assortment of factory paperwork including manual. The box has light-moderate wear with fraying and tears at edges and corners. Each of the ears has been reinforced with tape on the interior.

What better firearm to be chosen by the Buffalo Bill Historical Center, now the Buffalo Bill Center of the West for a limited edition run of firearms. Only 250 of these revolvers were made to celebrate Colonel William “Buffalo” Bill Cody. A Pony Express rider, soldier during the Civil War, civilian scout during the Indian Wars and, of course, the founder and host of Buffalo Bill’s Wild West show, Bill also was a founder of Cody, Wyoming where the Center of the West is located.

This revolver is a beautiful piece with gold and silver finish, engraving including a pony express rider and buffalo head, and etched grips with a portrait of Bill and his cattle brand. With only 250 made, this is a rare opportunity and a gorgeous piece that will add to any collection.

This example is in Excellent condition, appearing to have spent more time in its included box than out. TThis would make a fantastic addition to any Colt collection, especially for fans of Wild West. Please see our photos and good luck!