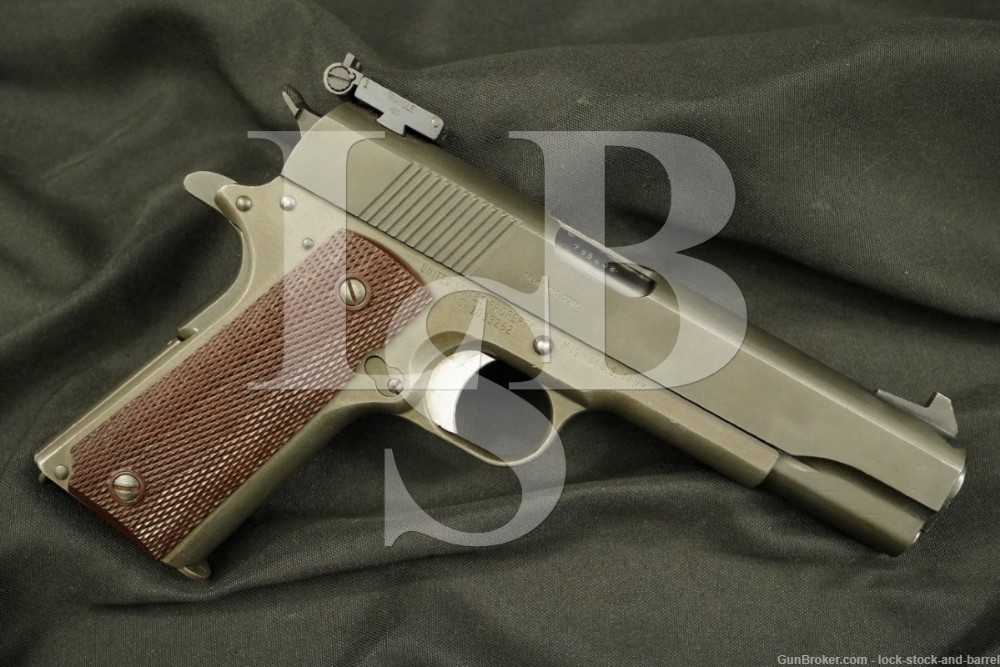 Stock Configuration & Condition: The grips are two-piece checkered plastic with reinforcement rings around the grip screws and reinforcement ribs on the interior. The interior of the grips are marked with a post-WWII part number. The grips have no notable wear or damage, only light handling marks. The checkering is sharp. There are no chips or cracks. Overall, the grips are in Excellent condition as not original to the gun.

Type of Finish: Parkerized, Aluminum Trigger (see Our Assessment). There is a patch of black paint on and around the front sight.

Overall Condition: This handgun retains about 90% of its current metal finish. The finish is thinning at most edges. The most notable wear is in the frontstrap where there is an odd pattern as though someone was preparing to checker or stipple the surface. There are some scattered light nicks and scuffs, some under the finish. The trigger has wear on it consistent with a previously installed trigger shoe. There is a faint “idiot mark” under the slide stop on the left of the frame. Black paint has been applied on and around the front sight. The action shows operational wear. The screw heads range from sharp to lightly tool marked with strong slots. The markings range from clear to worn, but legible. Overall, this handgun is in Very Good condition as customized.

Mechanics: The action functions correctly. The slide to frame fit has no play, but the slide moves fairly smoothly. A rubber buffer has been installed on the guide-rod behind the recoil spring. The trigger has a little bit of creep. We did not fire this firearm. As with all used firearms, it may need a thorough cleaning to meet your maintenance standards.

Box, Paperwork & Accessories: This pistol comes with a single 7-round magazine marked “L” on top of the floorplate. The magazine has been refinished, showing scattered wear and pinprick erosion with intact feed lips and a strong spring.

Our Assessment: Developed from the standard-issue 1911 sidearm, the National Match pistols were accurized and fitted with adjustable target sights for use by U.S. military competition shooters. Using Bill Jenkins’ book “U.S. Military Match and Marksmanship Automatic Pistols” for reference, we have confirmed that this pistol’s slide assembly, including barrel and bushing, has proper markings and features for a National Match pistol assembled in 1964. The assembly has been fitted to a 1943 production Remington Rand frame, and well fit at that, with no play between the slide and frame. The pistol has also been equipped with a wide-spur hammer and a 1911-style flat mainspring housing. It looks like someone got ready to checker or stipple the frontstrap, but didn’t complete the job. While this should make for a great target pistol for another lifetime, USGI National Match pistols are also sought-after collectors’ items. With its 1964 slide assembly, this pistol will certainly have interest from the collectors, too. Please see our photos and good luck!