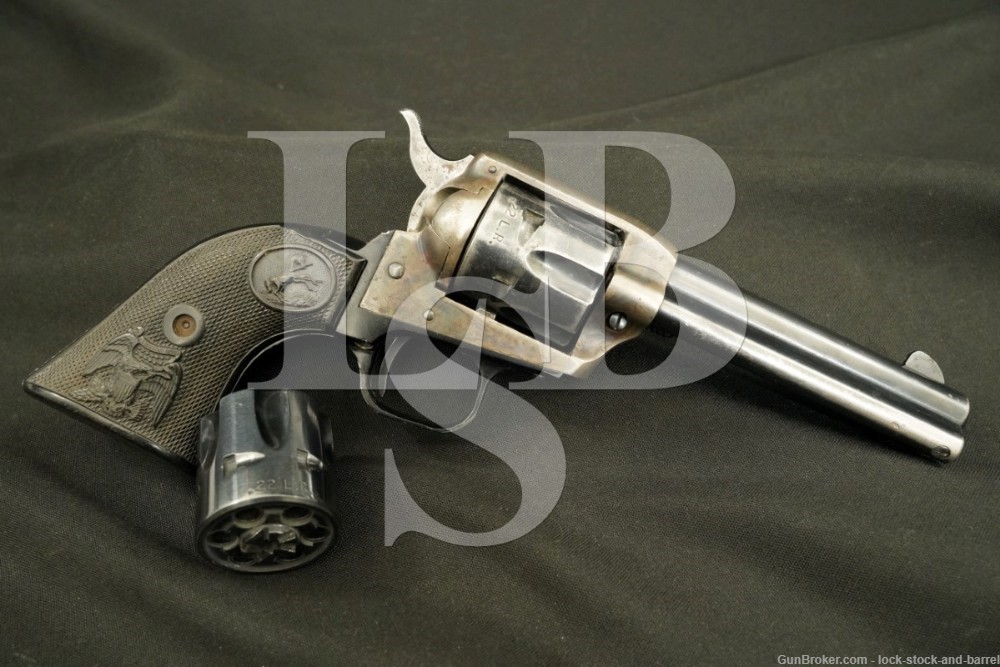 Markings: The left side of the barrel is marked “PEACEMAKER .22”. The top of the barrel is marked “COLT’S PT.F.A. MFG. CO HARTFORD CT. U.S.A.” The cylinder is marked “.22 L.R.” three times along the circumference. The left side of the frame is marked “PAT.SEPT.19.1871 / JULY 2.72.JAN.19.75” and features the Rampant Colt logo. The grip panels are both decorated with the Rampant Colt logo and the Great Seal of the United States. The bottom of the frame features the serial number “G115641”. The butt-strap has a floral engraving.

Sights/ Optics: There is a quarter round blade fixed to the muzzle. The rear sight is a square-notch integral to the rear end of the top-strap.

Stock Configuration & Condition/ Grip: The grip panels are two-piece checkered black plastic. There are nicks, scuffs, and scratches on the smooth borders that are most notable on the bottom flats. The checkering shows general handling wear with some compressed checkers on the left side. The checkering remains well defined. There are no cracks or chips. Overall, the grip panels are in Very Good condition.

Bore Condition: The bore is bright with sharp rifling. There is faint erosion near the muzzle and some stubborn fouling near the forcing cone.

Overall Condition: The revolver retains about 75% of its metal finish. There is significant holster wear along the ejector rod housing and on the left side of the barrel. There is also significant thinning throughout the cylinder. The case coloring has completely thinned on the top strap and slightly muted throughout. There is scattered light surface erosion on the sides of the frame and the hammer. There is fouling in the cylinder gap. There are scattered little nicks and scratches. The markings are clear. The screwheads range from sharp to tool marked with strong slots. Overall, the revolver is in Good-Very Good condition.

Mechanics: The action functions correctly. The single action trigger is crisp. The cylinder locks with some play on each chamber. The hammer has four clicks. The retaining pin can be pushed in further to act as a safety that blocks the hammer. We did not fire this pistol. As with all previously owned firearms, a thorough cleaning may be necessary to meet your maintenance standards.

Our Assessment: The Colt SAA has been offered in over 30 different calibers and various barrel lengths. Its overall appearance has remained consistent since 1873. Colt has canceled its production twice, but brought it back due to popular demand. The revolver was dubbed as “Colt Peacemaker” and is a famous piece of Americana, as it was popular with ranchers, lawmen, and outlaws alike since its creation and due to its association with the American Wild West era. This Colt Peacemaker .22 is a single-action revolver that takes .22 LR rounds. The revolver has a case colored frame and features detailed grip panels with the Rampant Colt logo and the Great Seal of the United States. The pistol is also mechanically sound and with a great bore. This revolver can be used for target shooting and small game hunting. Please see our photos and good luck!!